Good news we are free people again (still a lot of lockdown rules), but free none the less. In the first weekend out and about Aviya and I went to Zippori National Park. This park can be found in the north of Israel and is about an hour and 20 minutes from Tel Aviv. Join us on this adventure!

Who, what and where

Zippori National Park is located in the Western Lower Galilee and can be found at 289 meters above sea level. The mountain called Zippori is surrounded by valleys which contain the Zippori stream and several springs.

Over the years the mountain has seen some name changes. The ancient name was Zippori because it is located on top of a mountain with a birds eye view of the surrounding area. The Romans called it Diocaesarea which roughly translates as the city of the god Zeus and of Caesar. When the Crusader period arrived it was called Le Safourie. The name could still be found when Zippori became an Arab village with the name Saffuriyeh. In 1949 the ancient Hebrew name of Zippori made it’s return.

These days you can find remains of the old cities at Zippori including a street system with public buildings, churches, synagogue and an amphitheatre dating back to the Roman and Byzantine period. The Crusaders built a fortress which is still standing. During excavations more and more was uncovered of this ancient city. 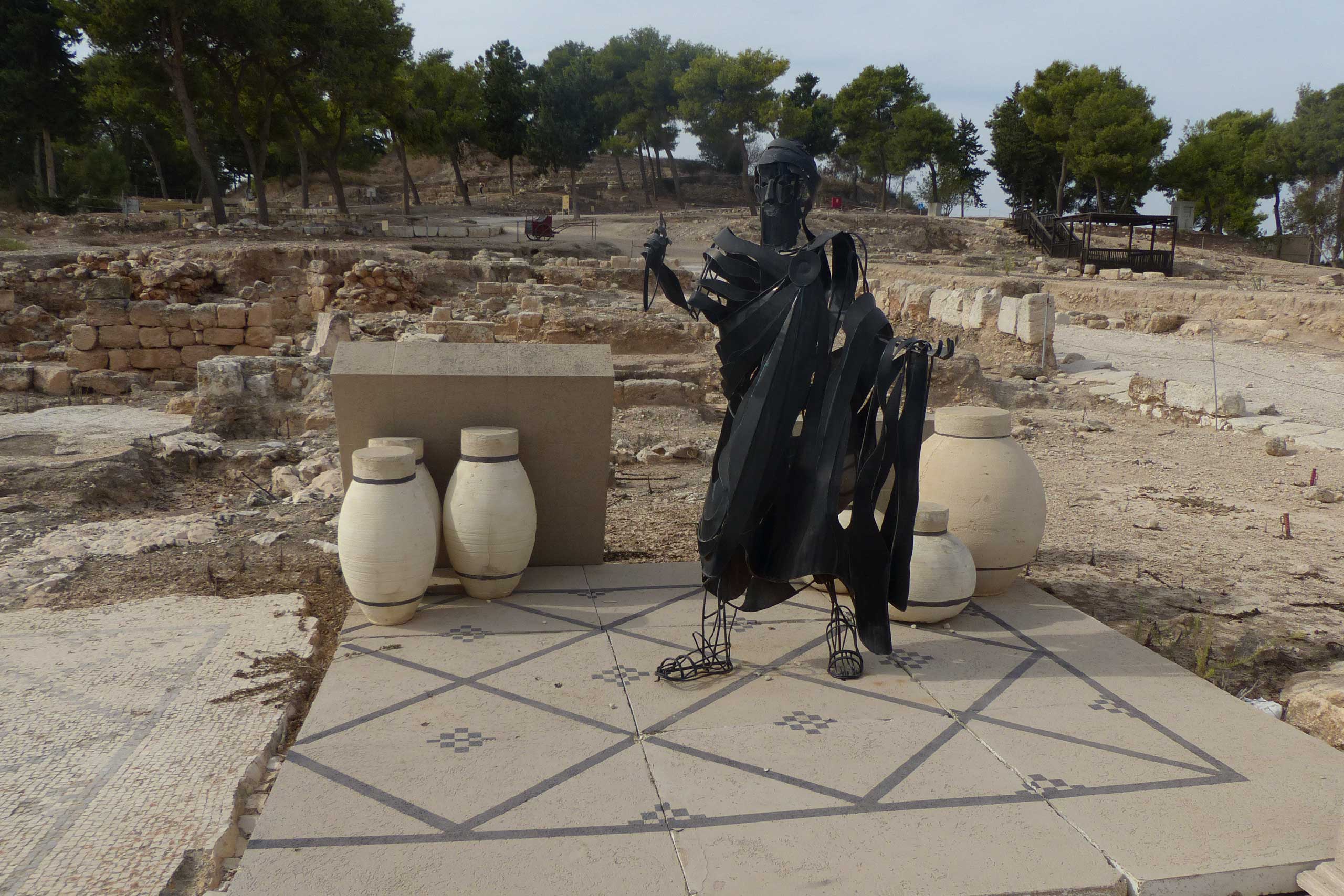 The history of the city

During the reign of Alexander Janaeus (103 BCE), Zippori is mentioned for the first time. However there is archaeological evidence there was some sort of settlement before that. In 63 BCE the country was conquered by the Roman Army and in 55 BCE Zippori became the capital of Galilee.

In 47 BCE Herod the Great (yes after the Masada story he is back for another appearance) was announced governor of Galilee. However due to the murder of his fathers dead he couldn’t take the job. Herod the Great had to take the city by force and attacked it during a snowstorm. After the death of Herod the Jews revolted against the Romans in 4 BCE and captured Zippori. This didn’t please the Romans and they burned the city and sold the Jewish inhabitants into slavery. The city came under the rule of Herod’s son who rebuilt the city and the fortress. 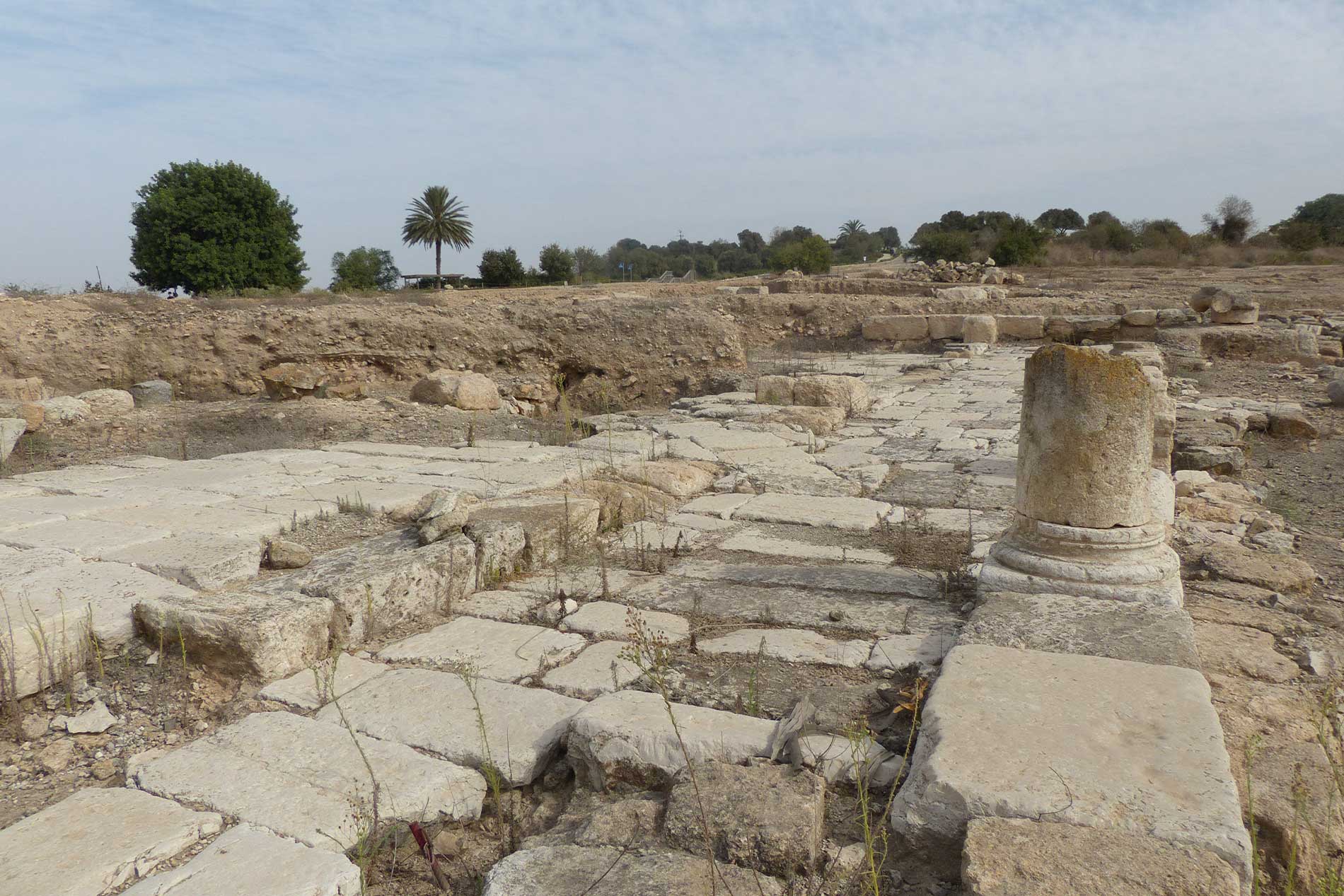 During the first revolt of the Jews against the Romans in 66 CE the people of Zippori made a treaty with the Roman army. Therefore the Romans protected the city from destruction. Around 135 CE the name Zippori was changed to Diocaesarea and the Jewish leaders were unseated in favor of the Roman rulers.

However in 363 CE the city was completely demolished during an earthquake that hit the complete nation. It wouldn’t take long before it was rebuilt and the Christian community grew. Multiple churches were built even though the biggest group of the population remained Jewish. The city kept on growing until a decline began during the Arab period. This would remain like this until the Crusader period, on which I write about more later. 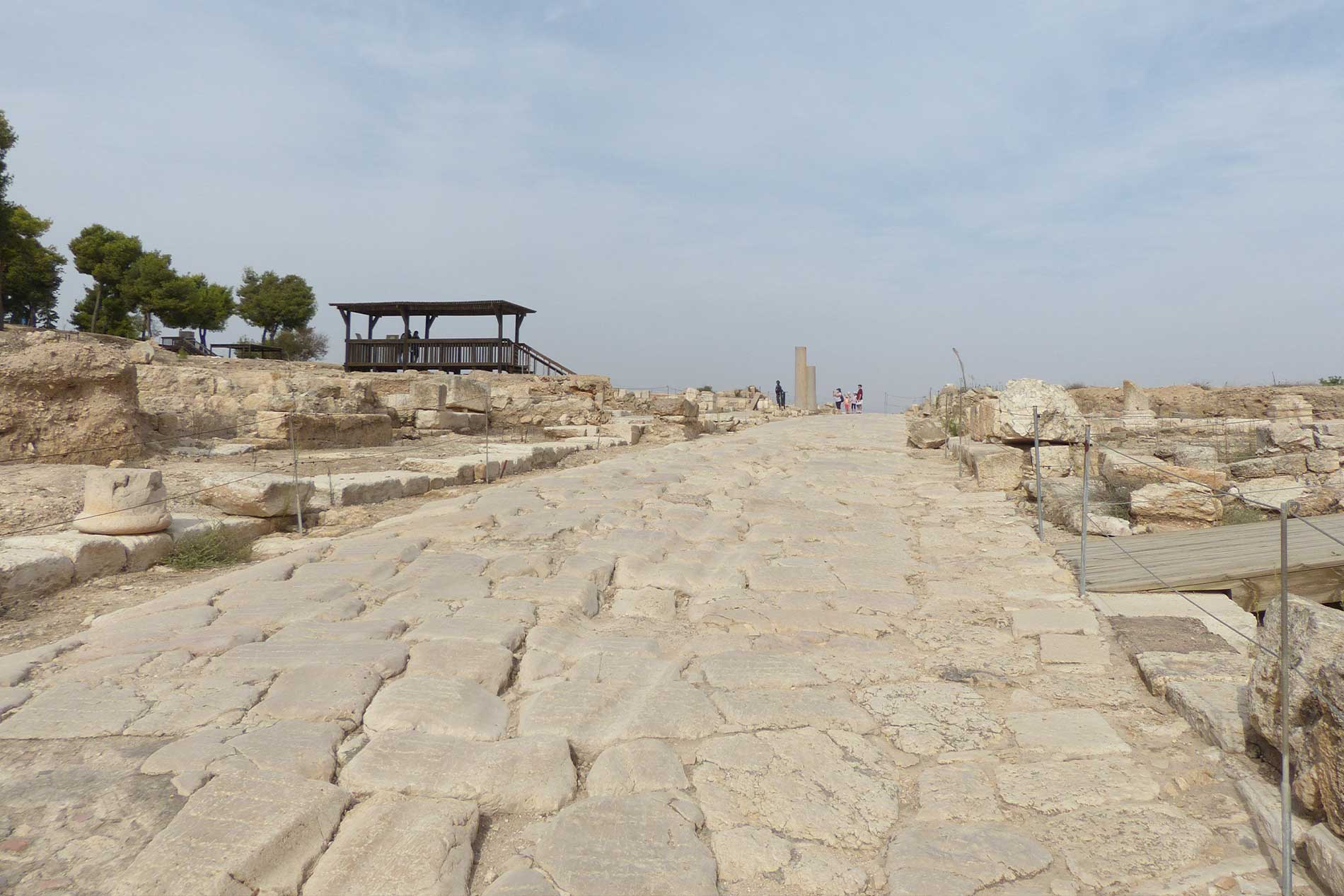 What survived from the city is a network of streets. The layout is typical urban planning as you would see in important Roman cities. At the heart of the street systems were two colonnaded streets which are creating a cross. The Cardo ran from north to south and the Decumanus ran from east to west. Back in the day the streets were paved with hard limestone while the potifcoes along both sides of the streets were paved with mosaics.

Only bits of walls and columns stand these days but a large portion of the mosaics is still there. Some of the mosaics are just the bits that are next to the main road, but most of it are pieces that were in buildings. As well as geometric patterns and designs, Roman mosaics frequently depicted divine characters or mythological scenes.

In an old vila from the Roman times that was destroyed in the earthquake you can find the Mona Lisa of Zippori. Around her are scenes depicting the story of Dionyus and Hercules. The room where the mosaic is laid upon in the ground was formerly a dining area.

The mosaics are very impressive! The colors are still so vibrant and colorful. Although some bits are missing you can still see the scale and impressiveness of the art. The creators of these mosaics are highly skilled and impress even so many years later. 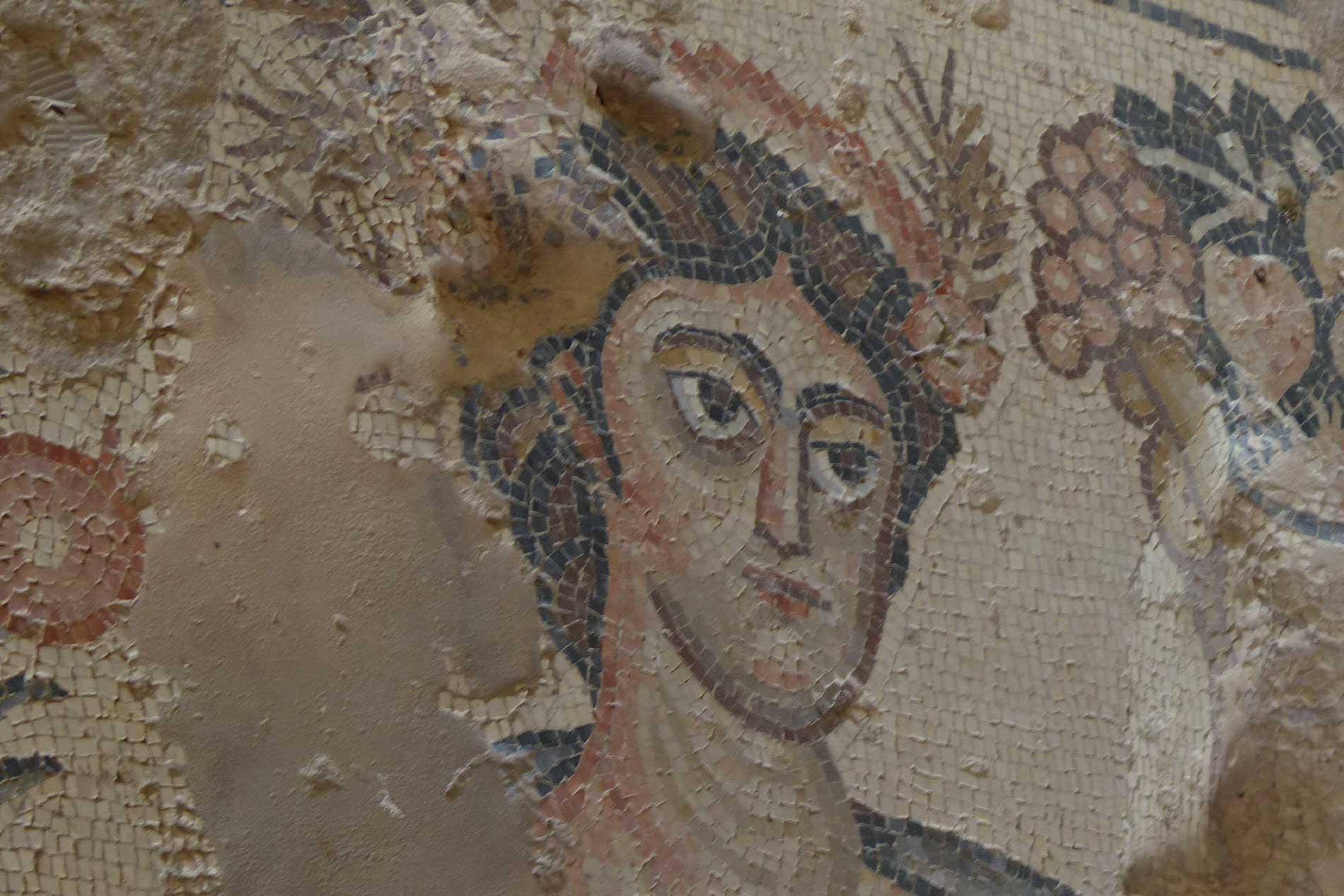 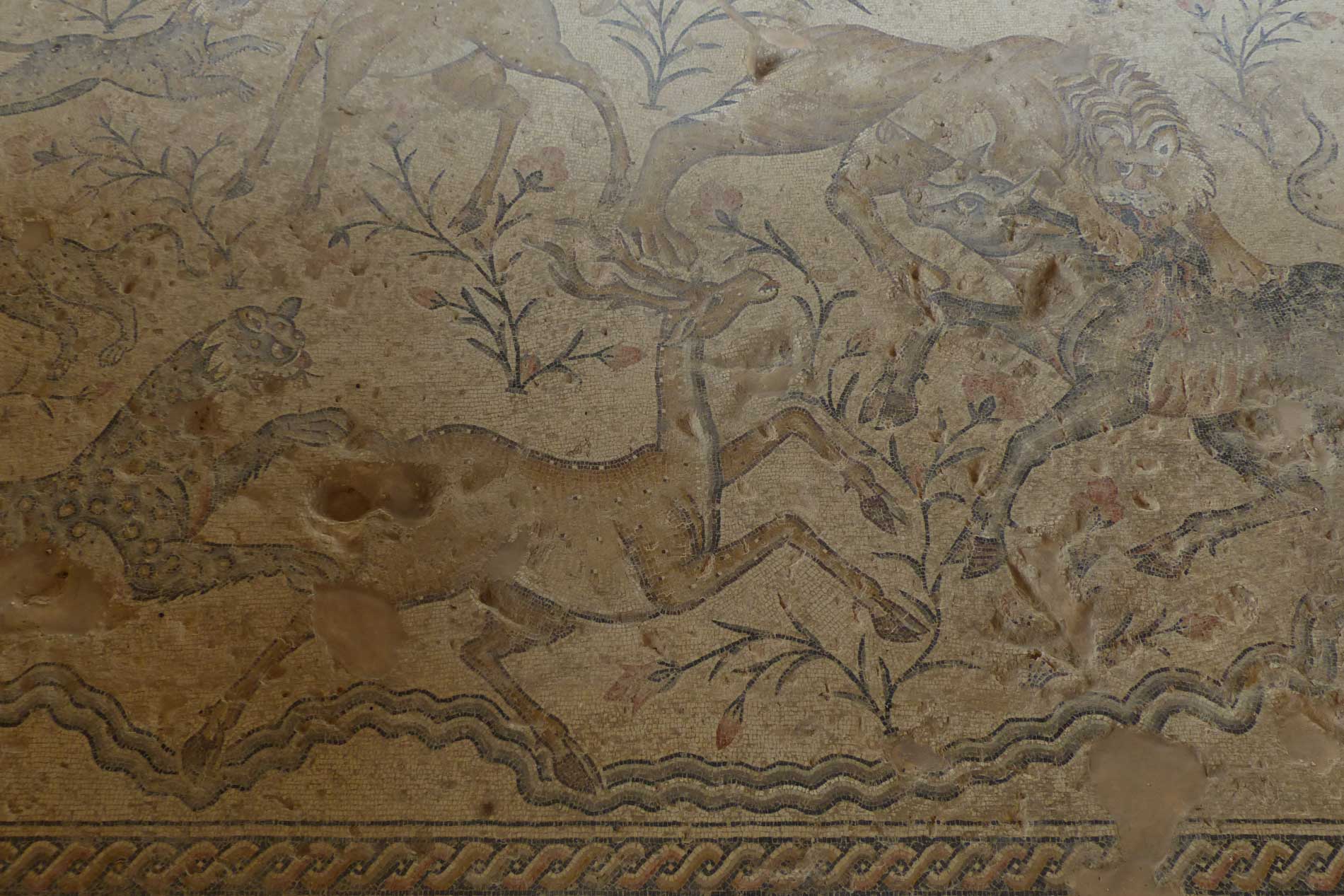 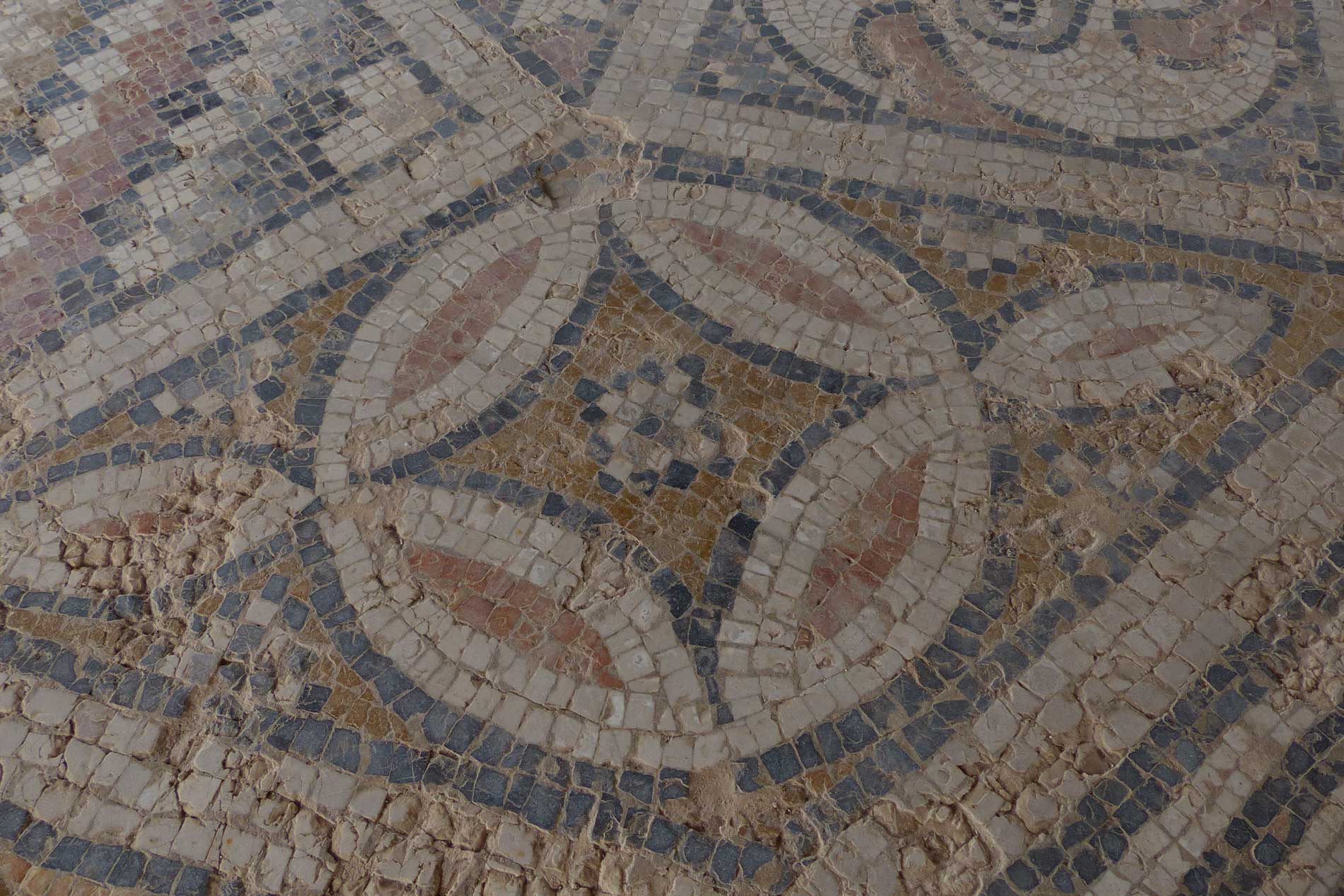 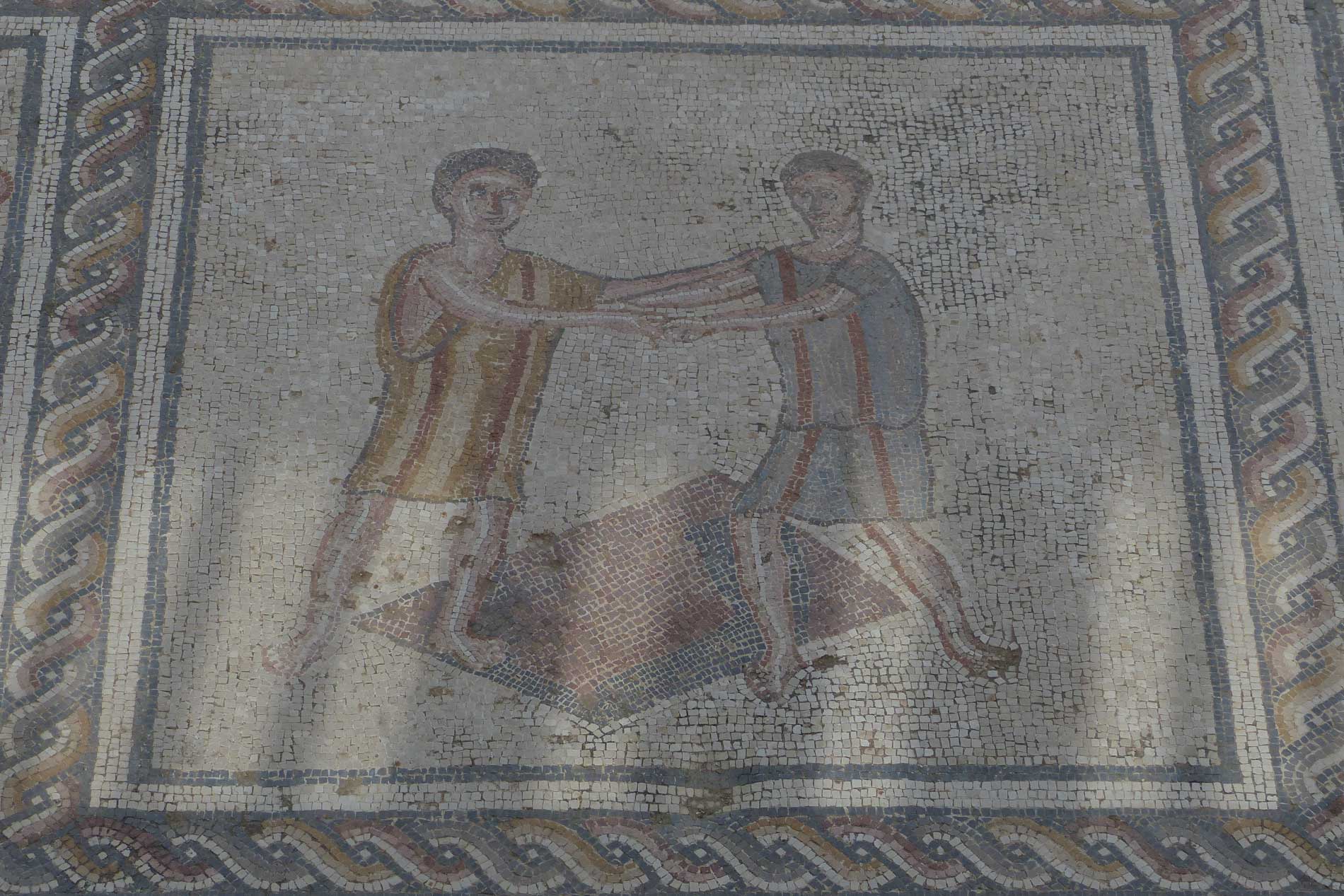 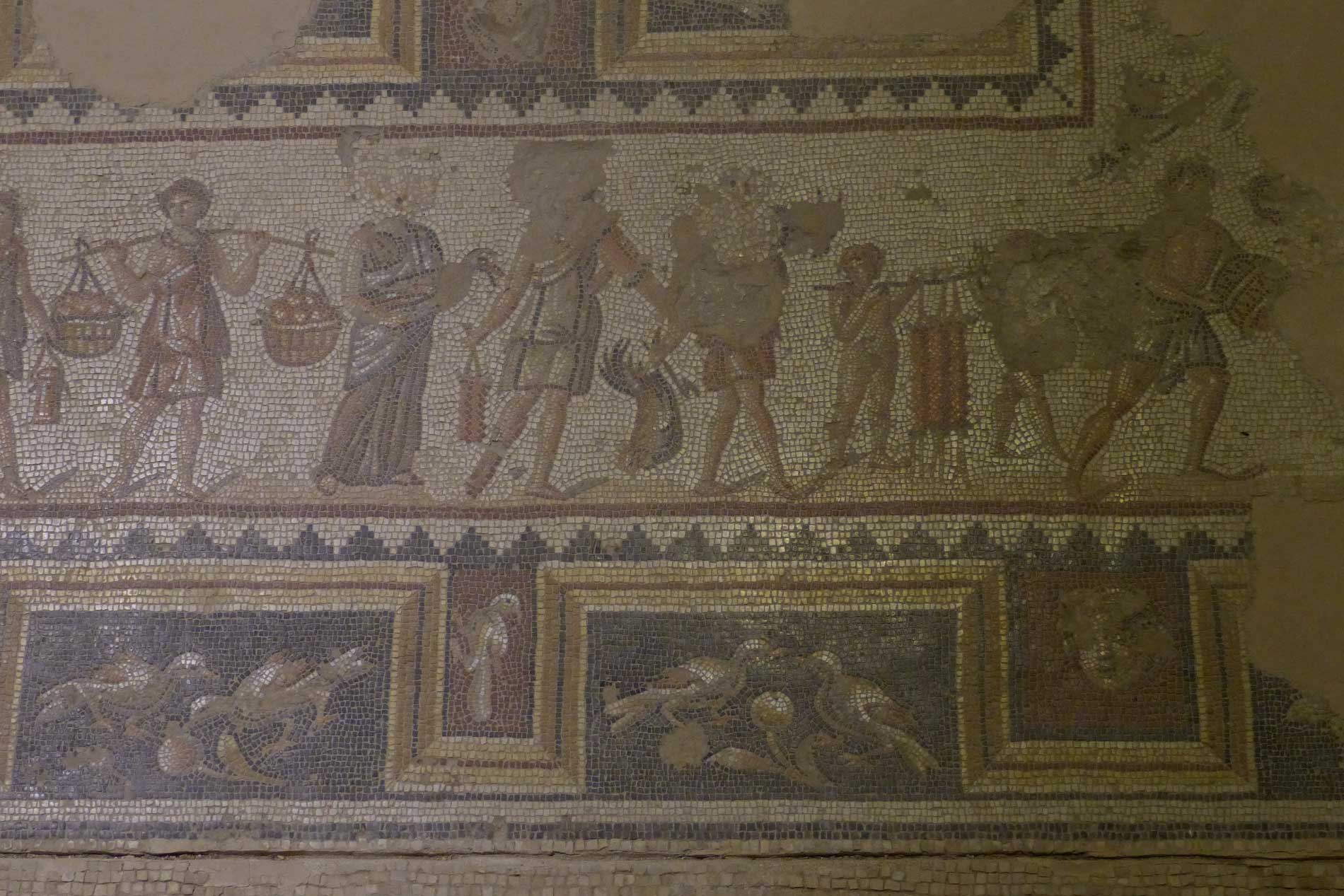 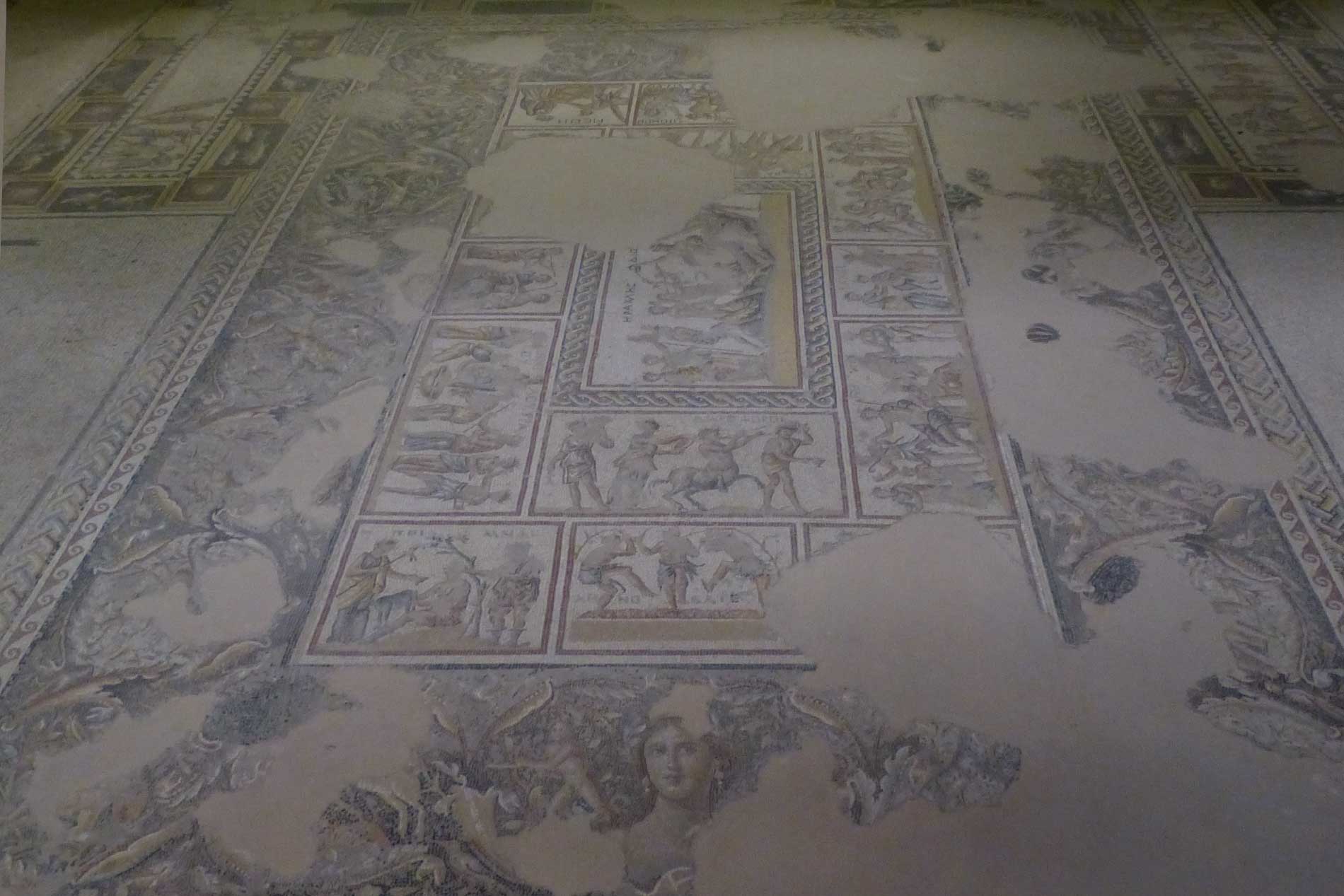 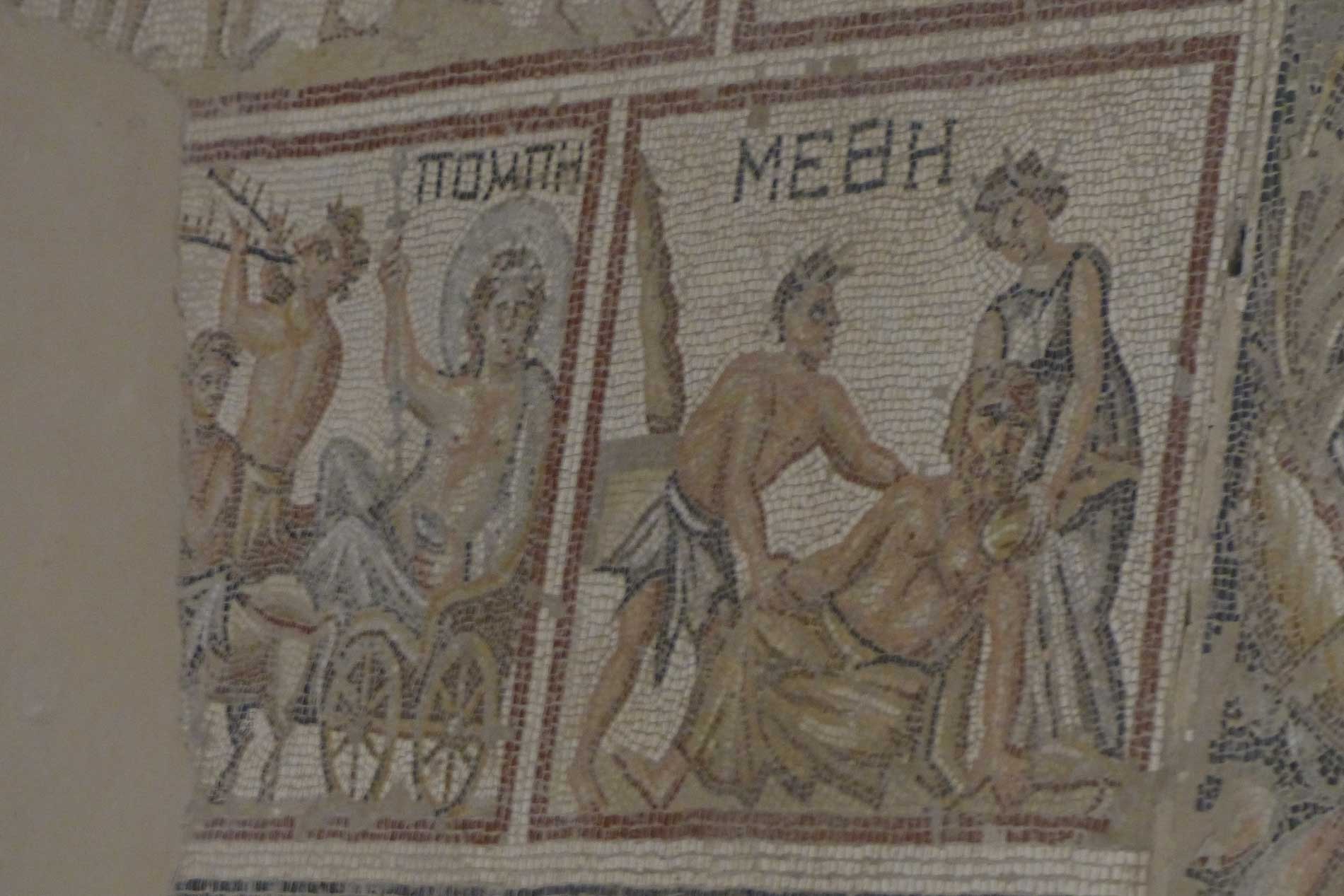 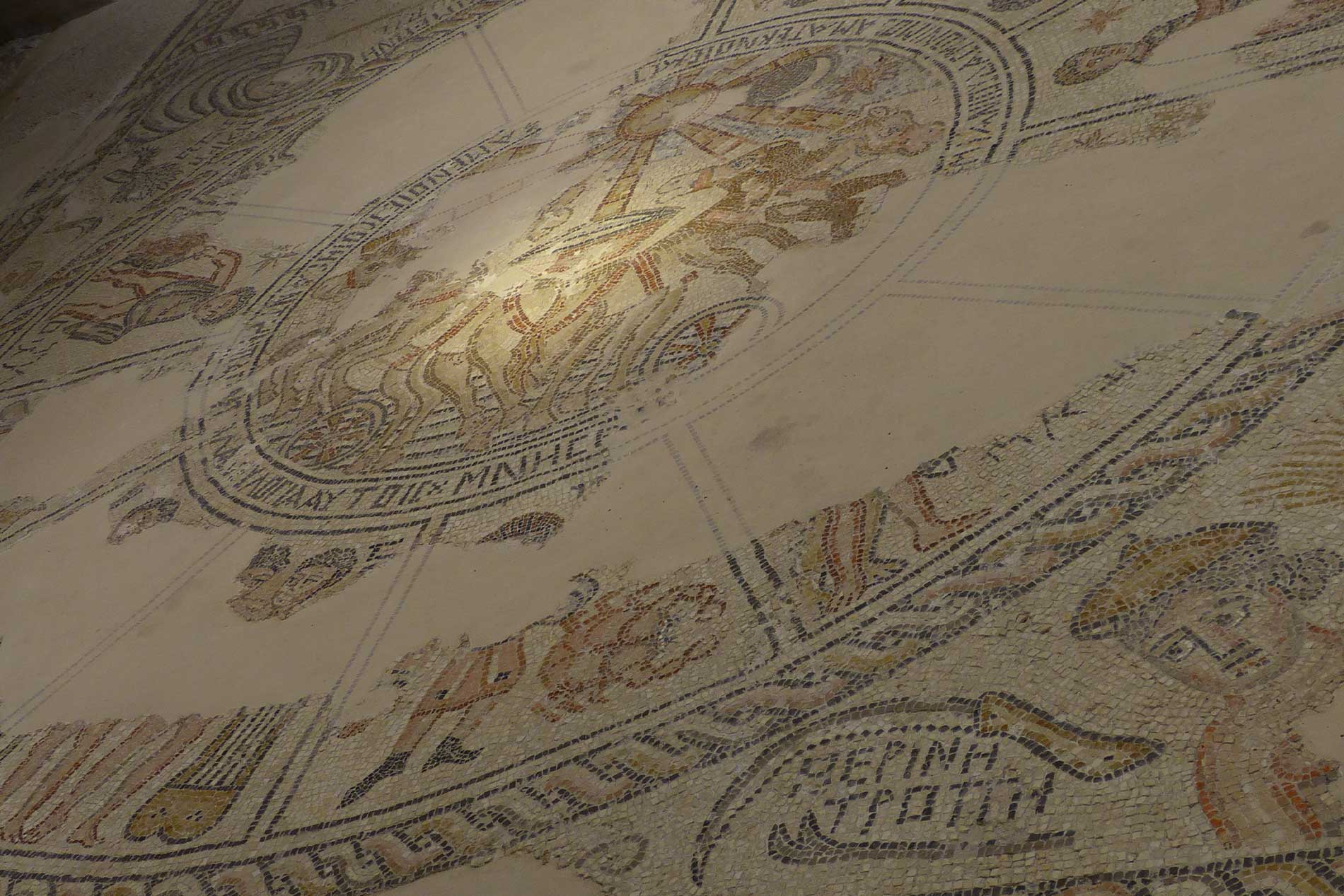 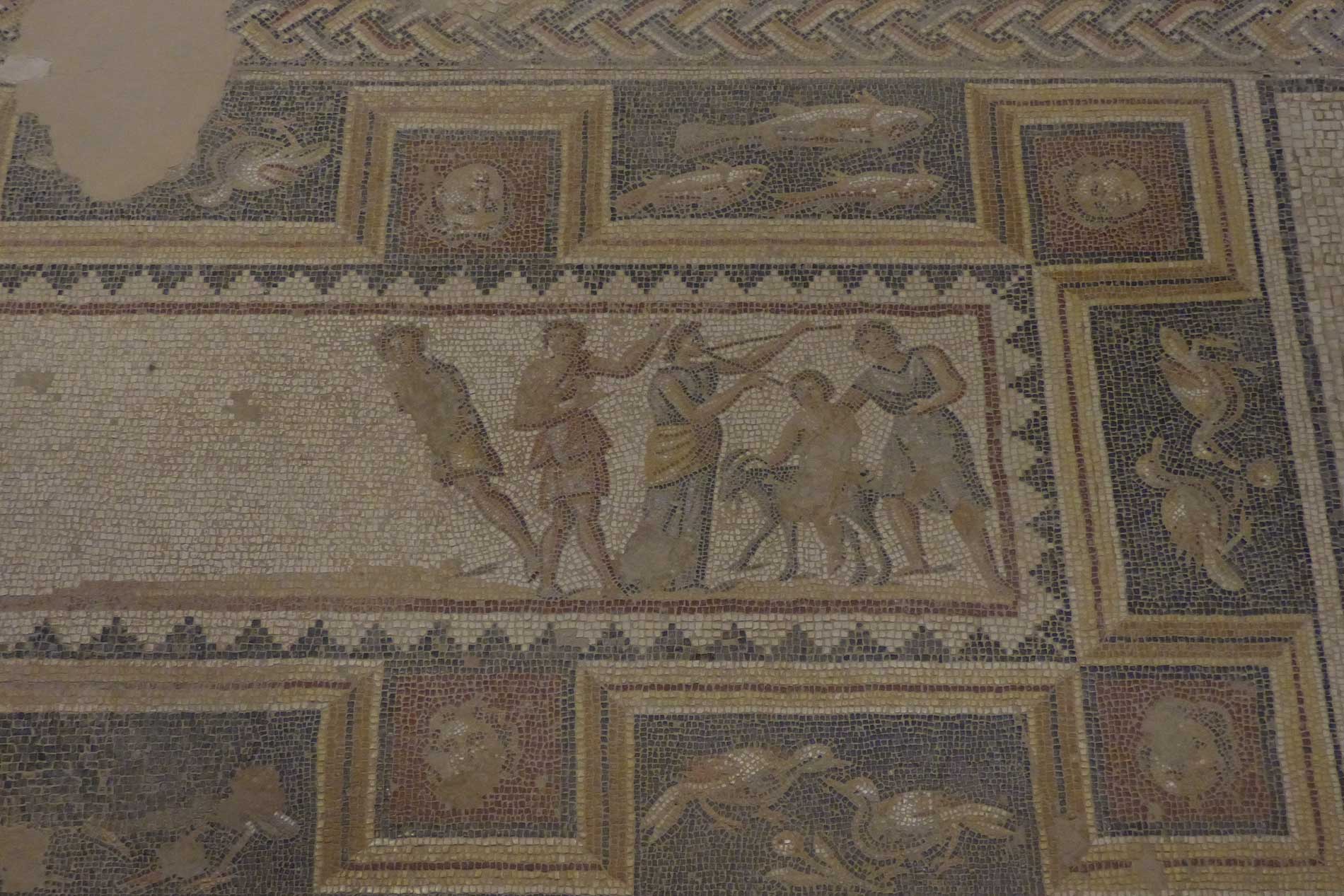 The theater was built around the turn of the second century CE and it was used until the Byzantine period. Built on top of a steep northern slope the theater offers a capacity of 4500 stone seats back in the day.

Entertainment was very important to the Romans and the plays that were performed here showed the Roman way of life: hedonist and pagan. As pagans worship many gods or goddesses or the earth or nature this was totally the opposite of the Jewish way. It raised many concerns in the Jewish community and many Rabbi’s had their opinion on the theater. None were very positive towards it.

Over time the theater ended up being in bad shape. Most of the seats are not ready for use and only a handful of rows have been reconstructed in the old fashion way. The stage has been rebuilt with some of the original features still intact. 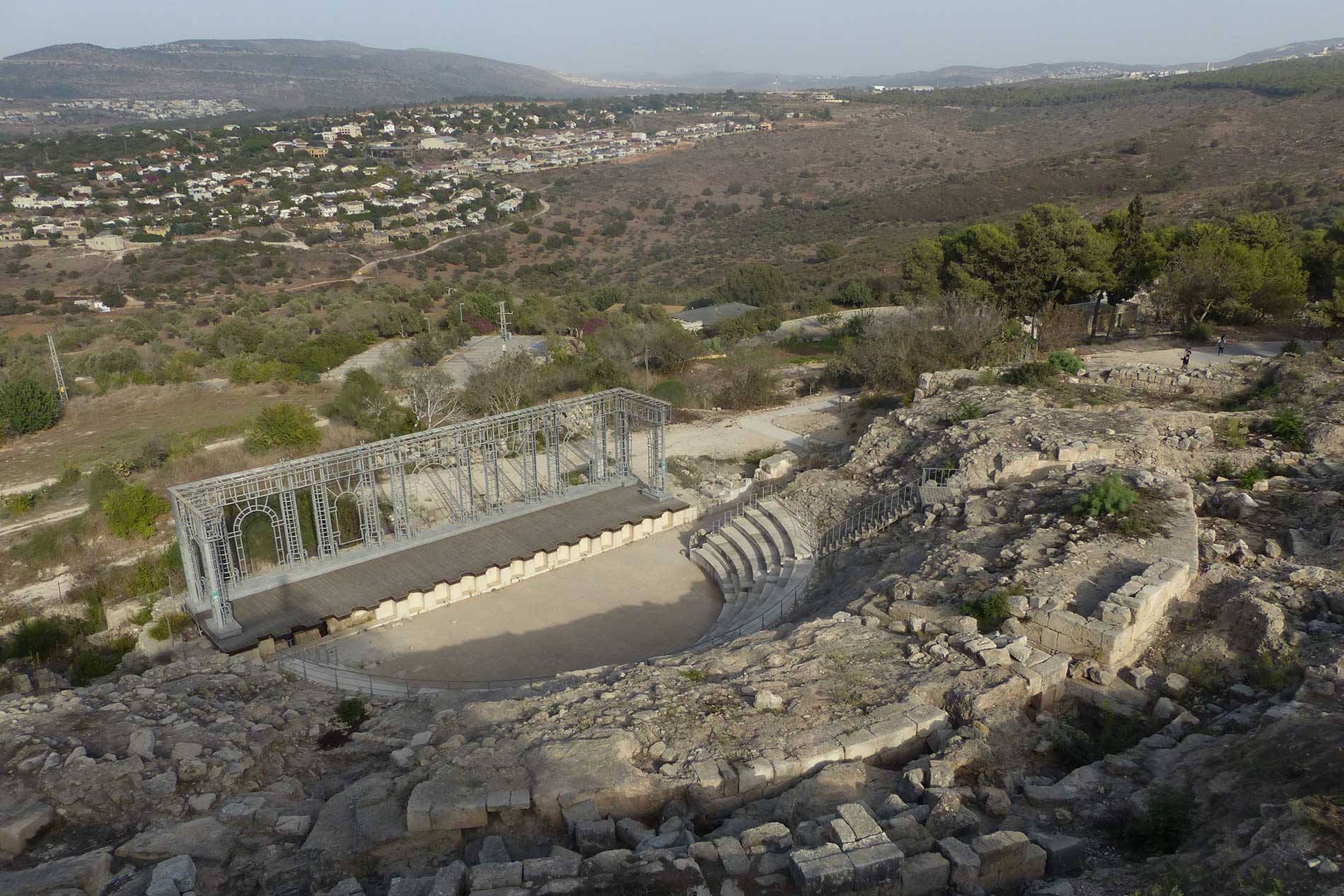 Just outside of the ruins of the old city you find the ancient water system. The reservoir is part of the city’s water system. It begins around the villages of Mashhad and Reineh some 10km away from the ancient city. Through aqueducts the water came into the water reservoirs near Zippori. The water reservoir is 260 meters long and ranges from a width of 2 to 4 meters and is 10 meters high! 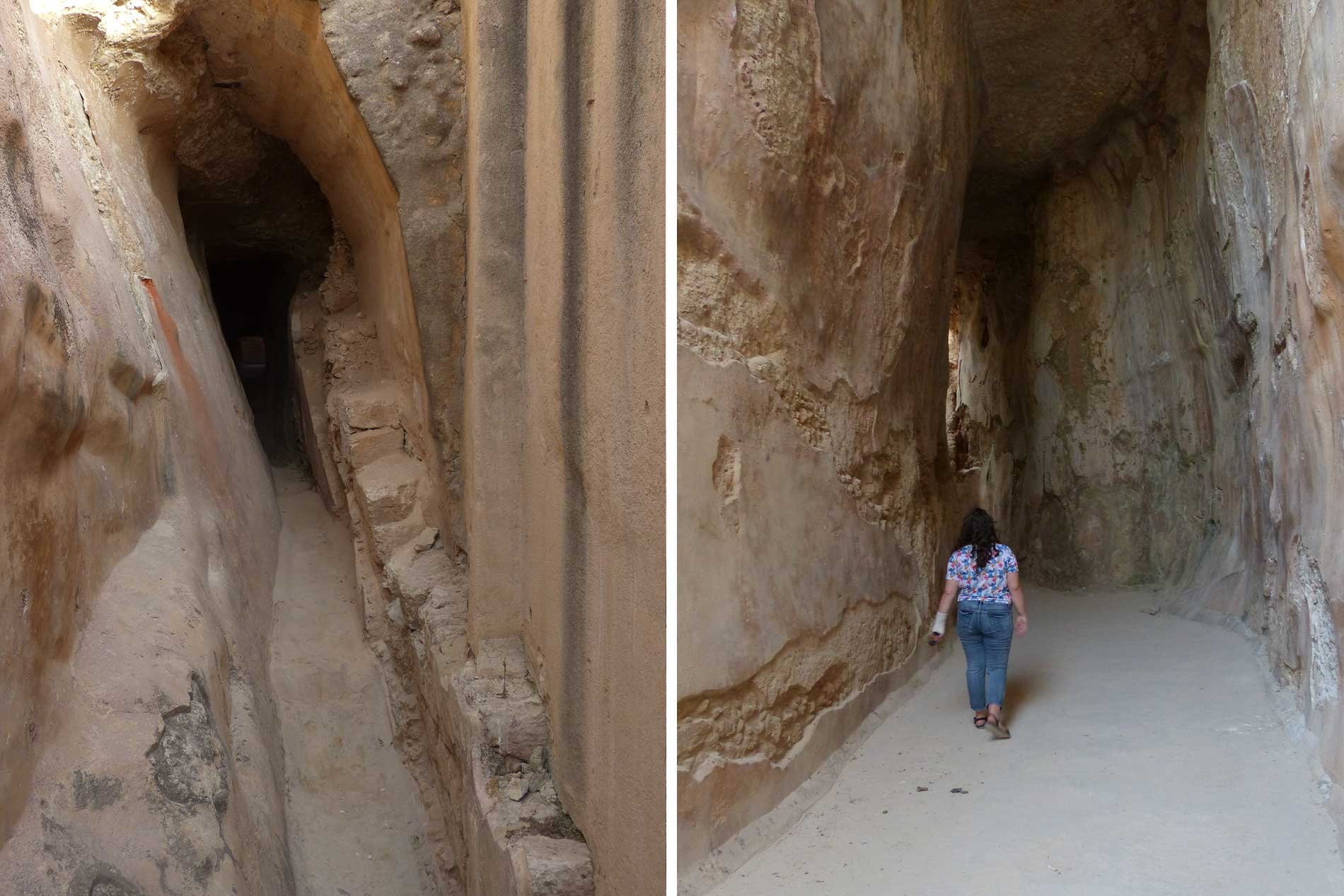 The total capacity was 4,300 cubic meters of water which could supply 18.000 people for 5 weeks. Vertical shafts would regulate the water flow through the city with the help of a valve. 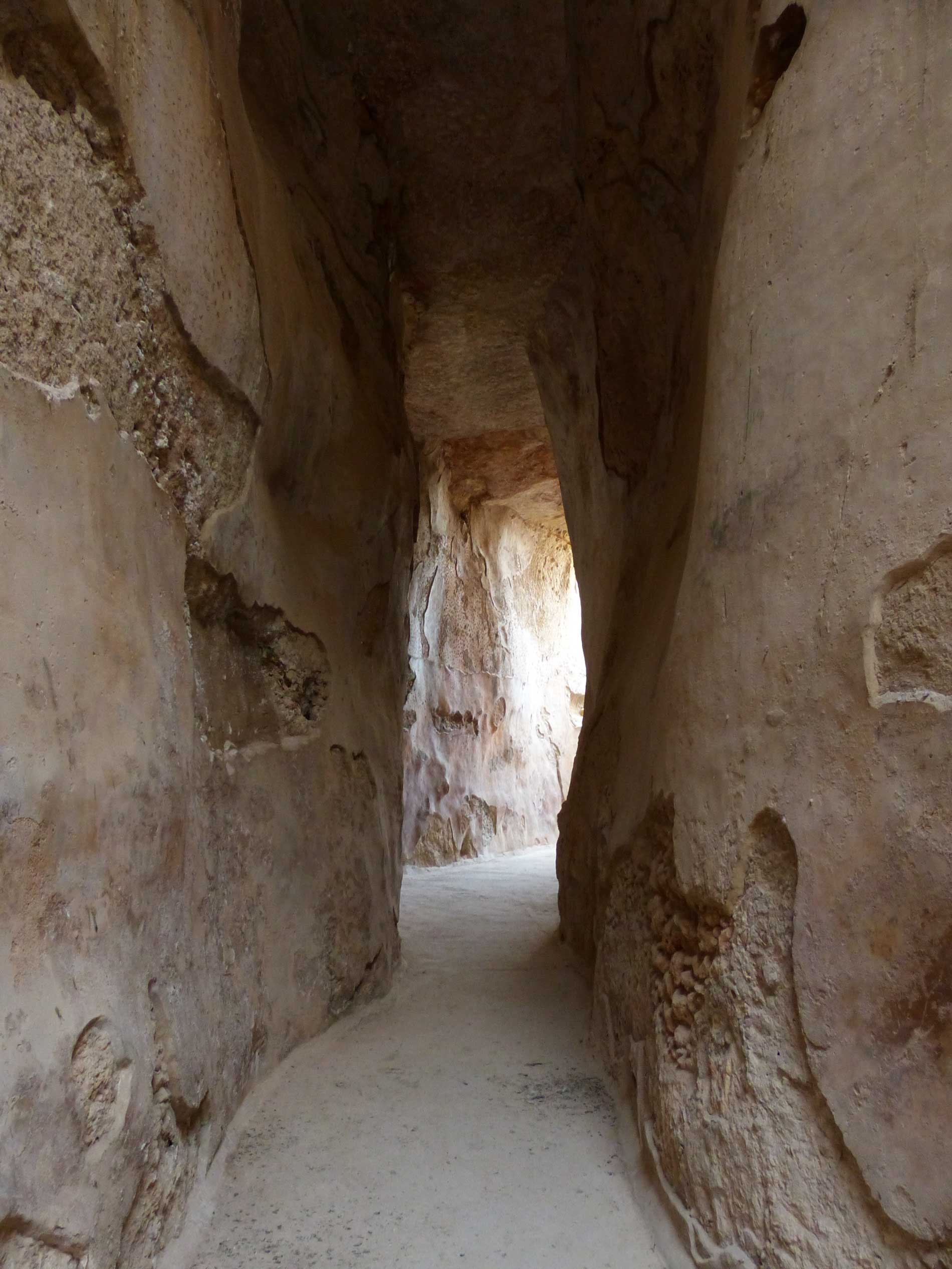 The fortress was built on top of an old structure during the Crusader period. With the Kingdom of Jerusalem created by the Crusaders it replaced the Islamic rule over the region. The fortress counts two stories and is made out of large stones that came from older buildings around Zippori. It was used as a watchtower overseeing the city and valley.

During the Crusader period the fortress and city of Le Saphourie were taken over by Muslims under the rule of several occasions. In 1255 the village and it’s fort were back in the hands of the Crusaders. However after unrest among the local Muslim farmers the city was captured between 1263 and 1266 by the Mamluk sultan Baybars. From then on it was an Arab village of Saffuriyyeh. 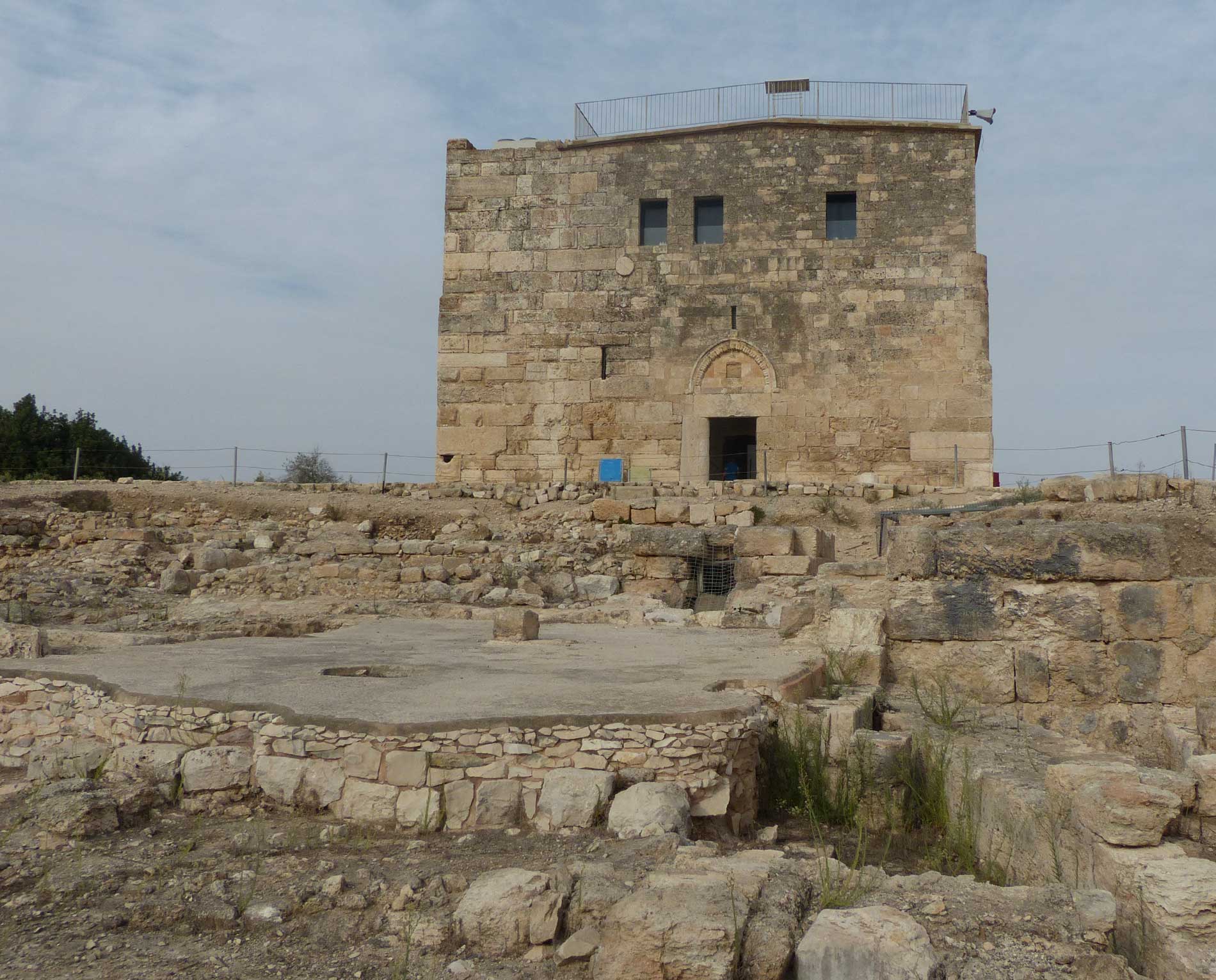 During the Arab Revolt (1936-1939) and the War of Independence in 1948 the fortress was housing Arab gangs that acted against the local Jewish population. These days the fortress is used as an education centre showing the history.

The view from the top of the fortress is outstanding. Seeing the surrounding mountains in the distance with the green valleys below is just a must see. 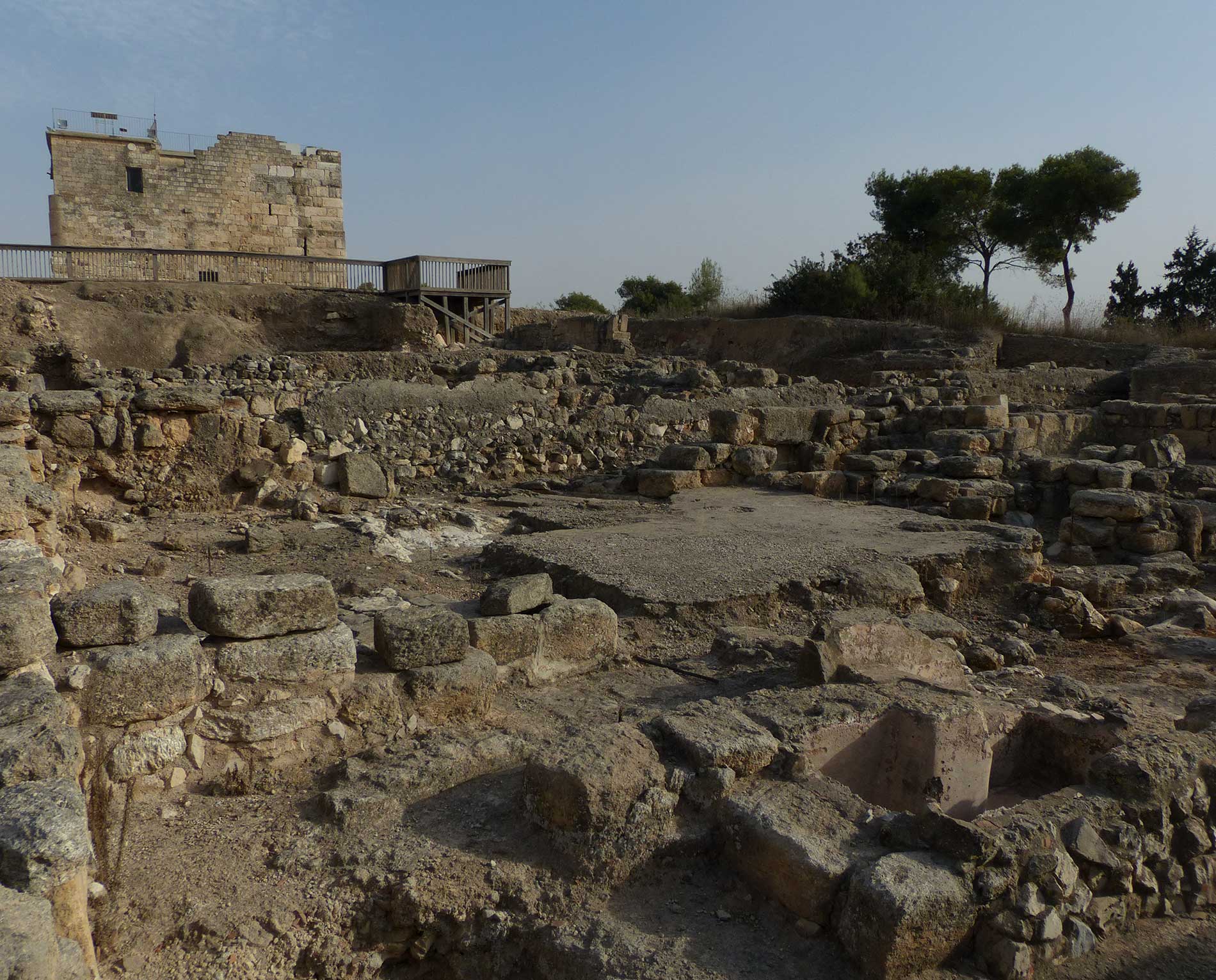 The National park gives a glimpse back in time and the Jewish life. The city is mentioned many times in the Talmud as a Jewish city with 18 synagogues and study houses. It could be exaggerating, but so far only one synagogue has been found. At Zippori the Rabbi Judah lived for 17 years and around 200 CE he redacted the Mishnah. The Mishnah is the first major written collection of the Jewish oral tradition. 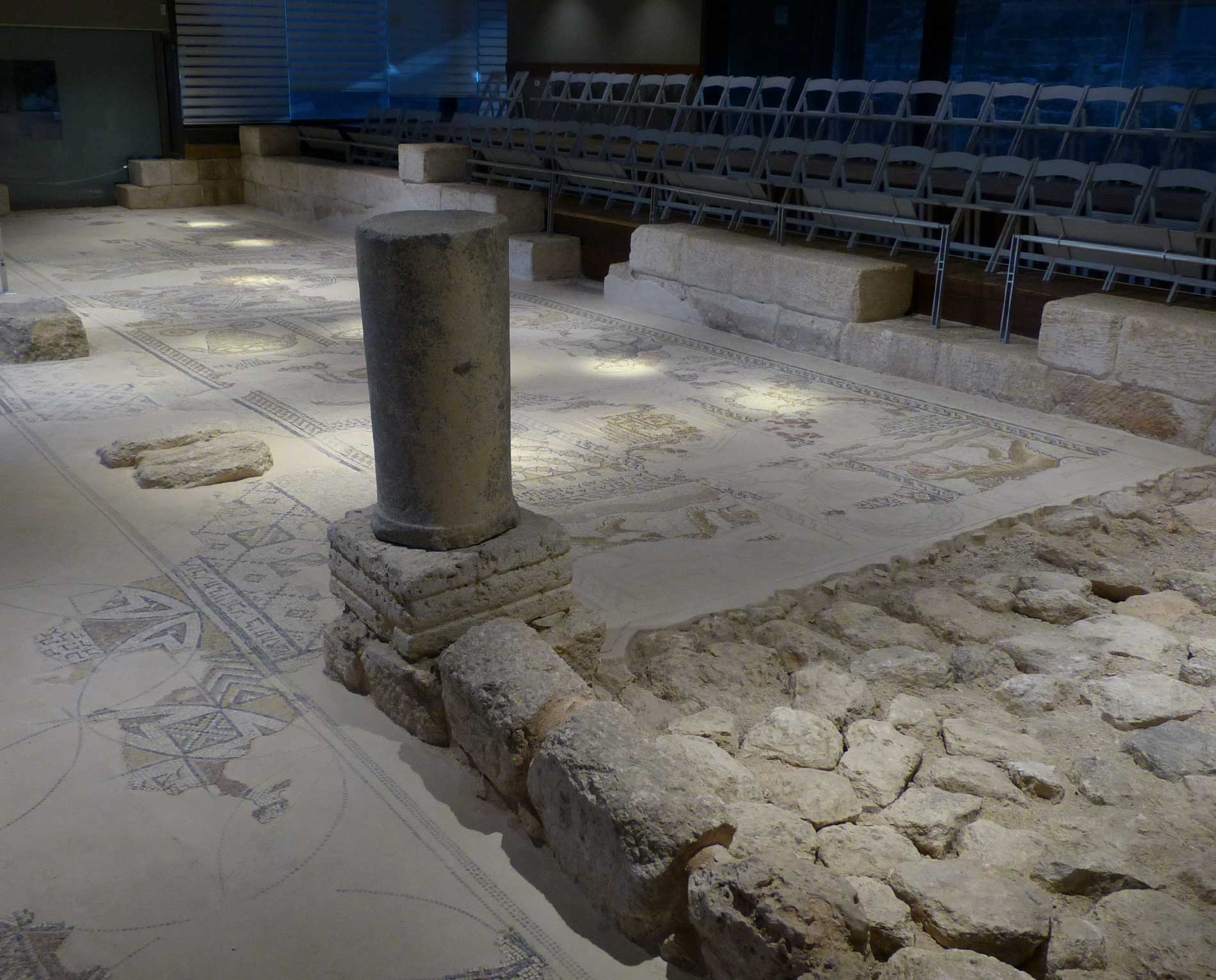 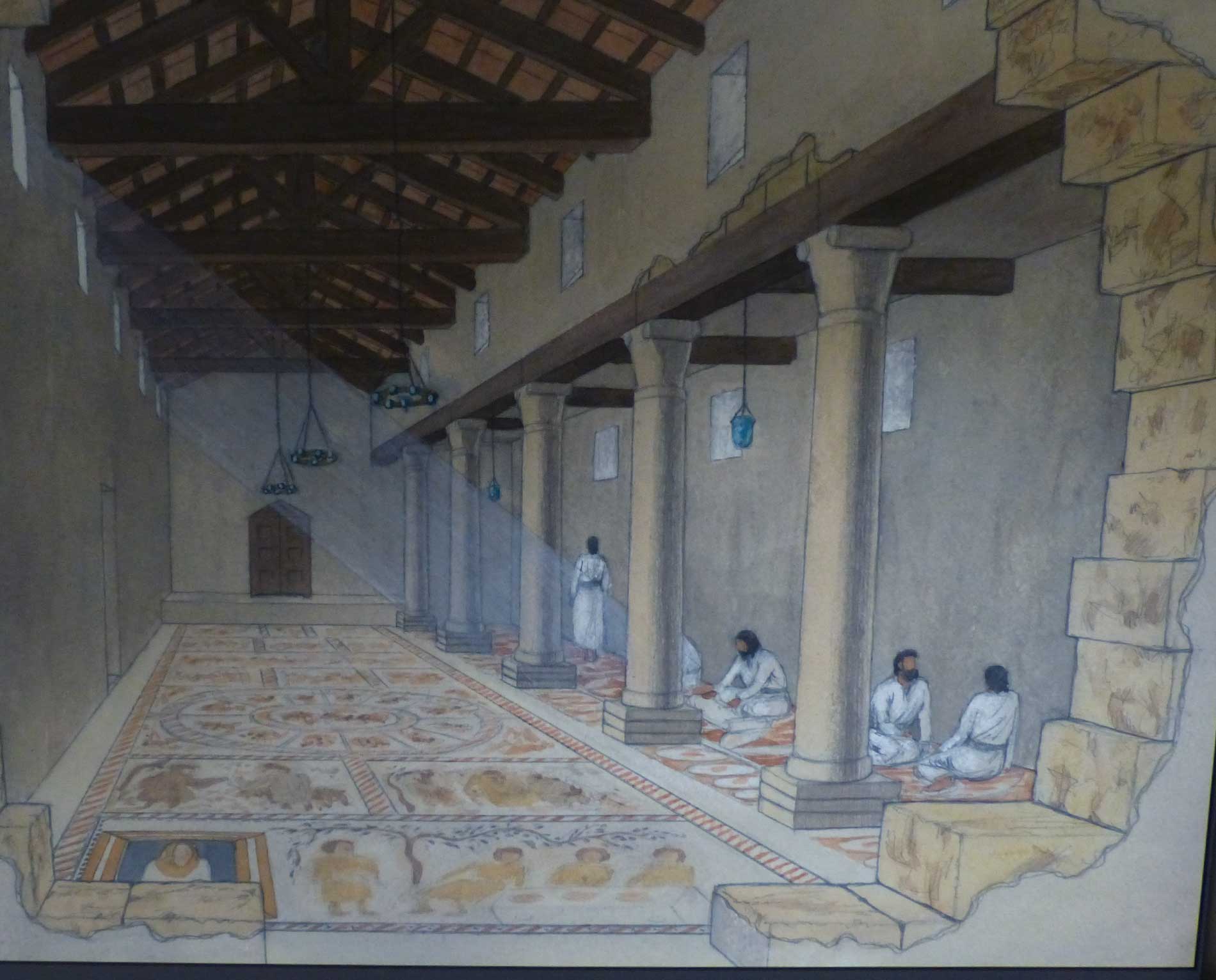 When you are into your history (I only wrote a small bit of the lengthy history) and or seeing great mosaic this is the place to do it. In this blog post I highlighted some of my favorite bits of the park but there is more to see. We had a great time visiting and I hope you enjoyed this written visit to the National Park!

Also for those of you who like an update of how life in Israel is, I got you covered! Next week will be month 2 off living in Israel and I was planning on a look back. If you got questions that you like to have answered leave them down below and I will try to answer them in next weeks blog. 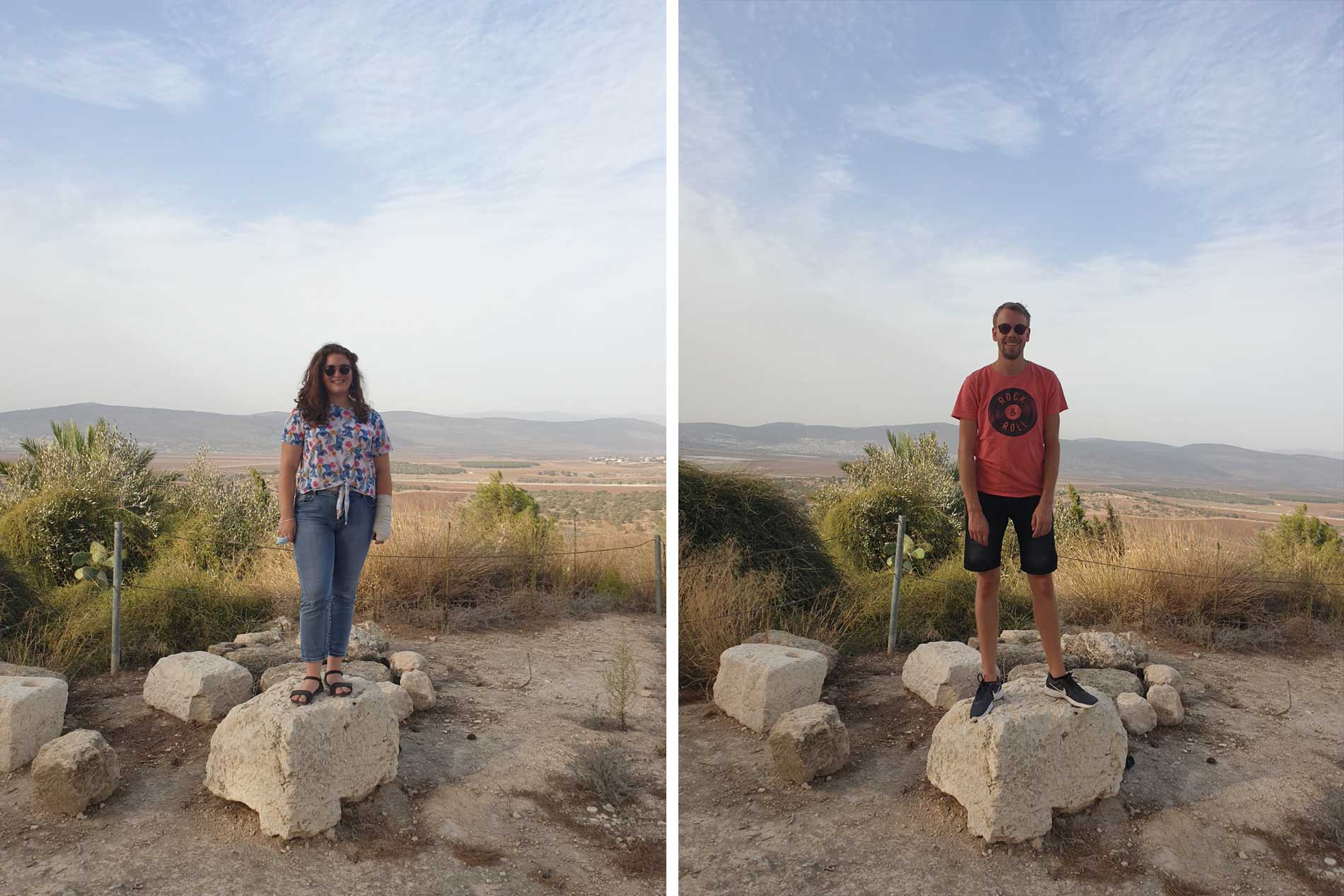 Read more about Israel and my adventures here. 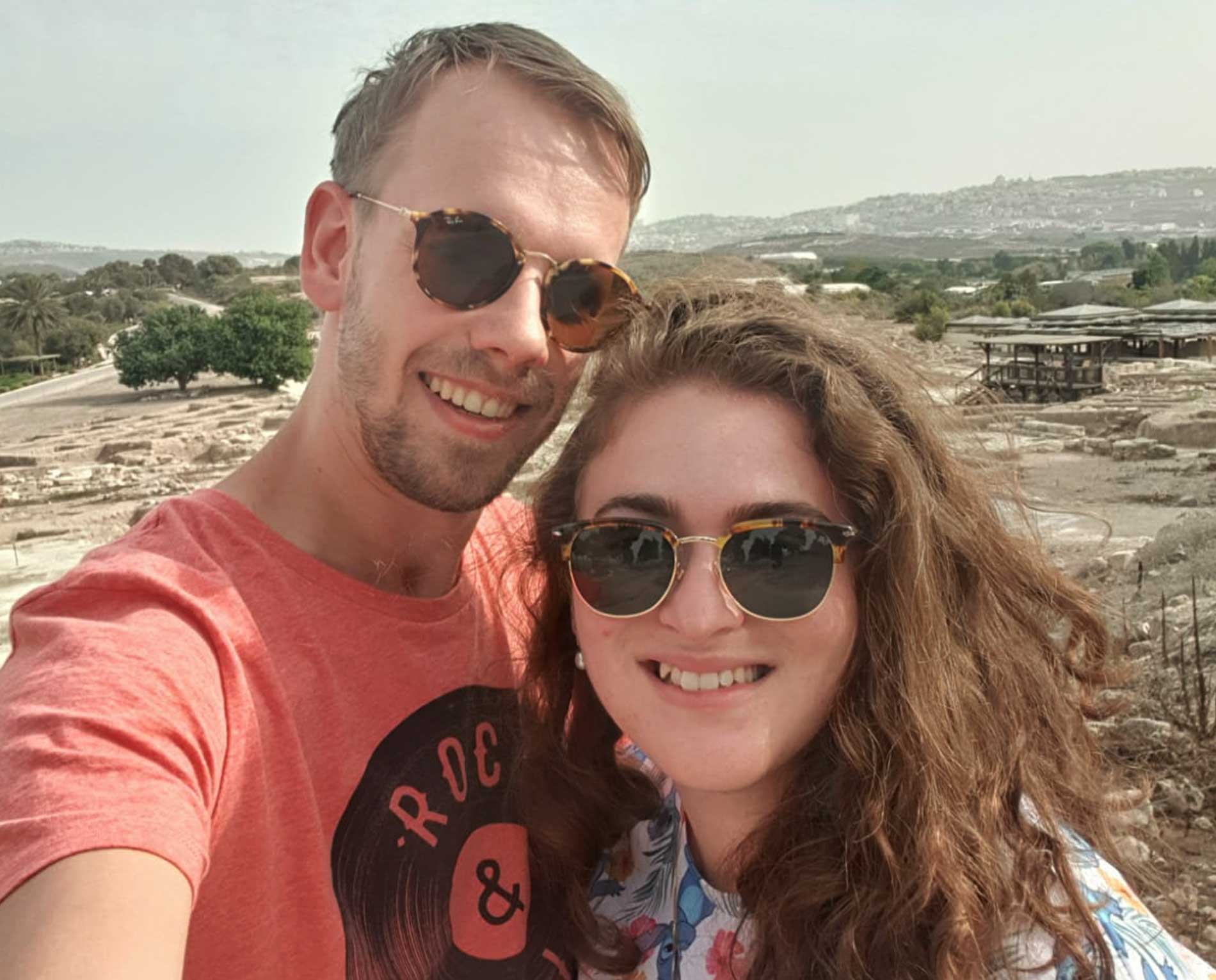