Last week we looked back at a journey I made last year visiting Masada, En Gedi and the Dead Sea. This week I like to take the opportunity to show another bit of the beautiful landscape of Israel called Rosh Hanikra.

You can find this beautiful bit of Israel in the most north-western corner of Israel. It is the only place in Israel where the sea meets the mountains and grotto’s that are hidden in the rocks. Rosh Hanikra is just meters from the border of Lebanon and is surrounded by trees and greenery. 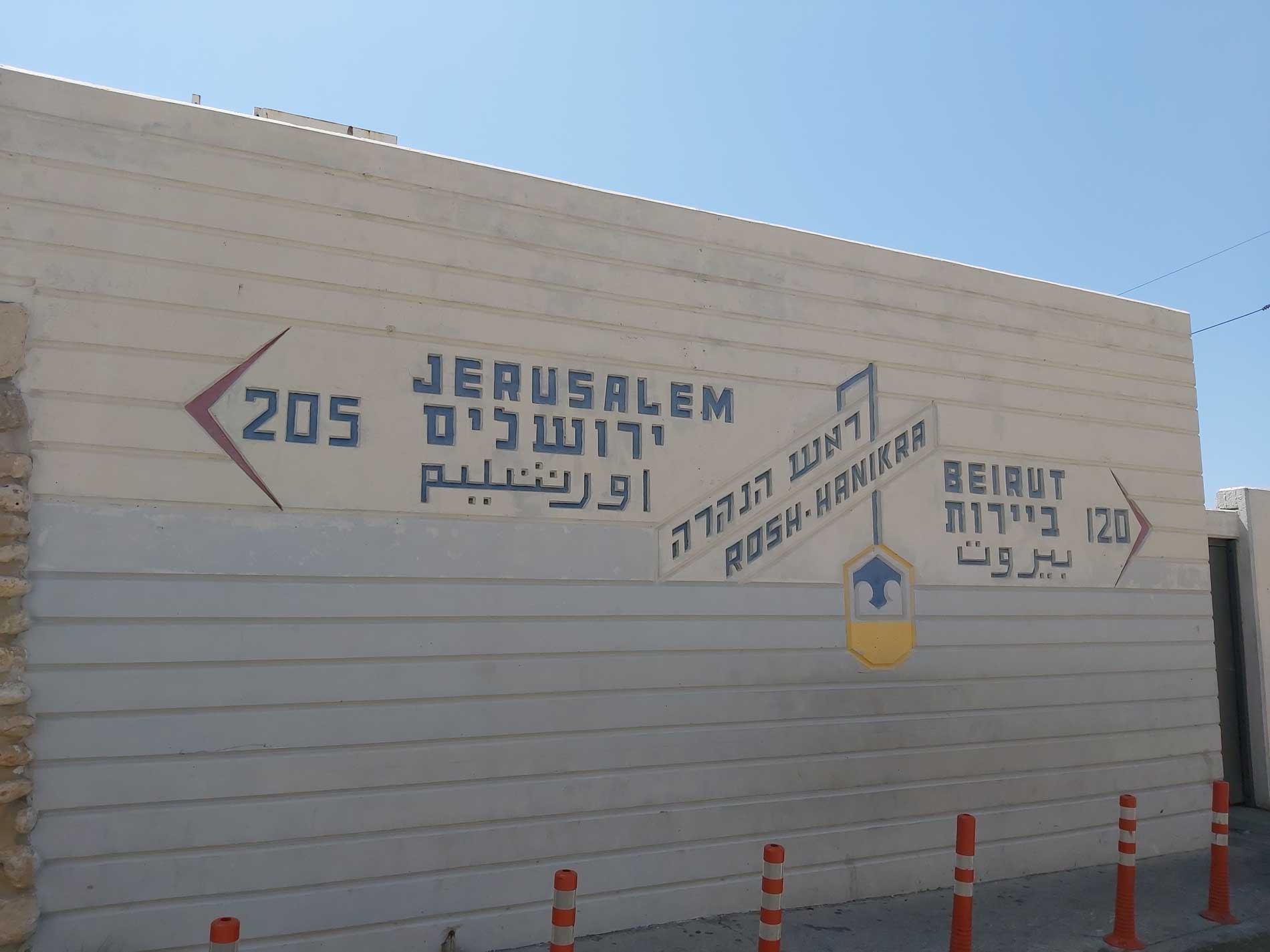 The grottos found at Rosh Hanikra are carved tunnels formed by the sea. The soft chalk rock that is making up the cliff created grottos after cracks began to form in the cliff. The power of the sea formed the rest of this natural phenomenon after thousands of years. The total length of the tunnels are around 200 meters and they branch off in various directions with some bits connecting each other. 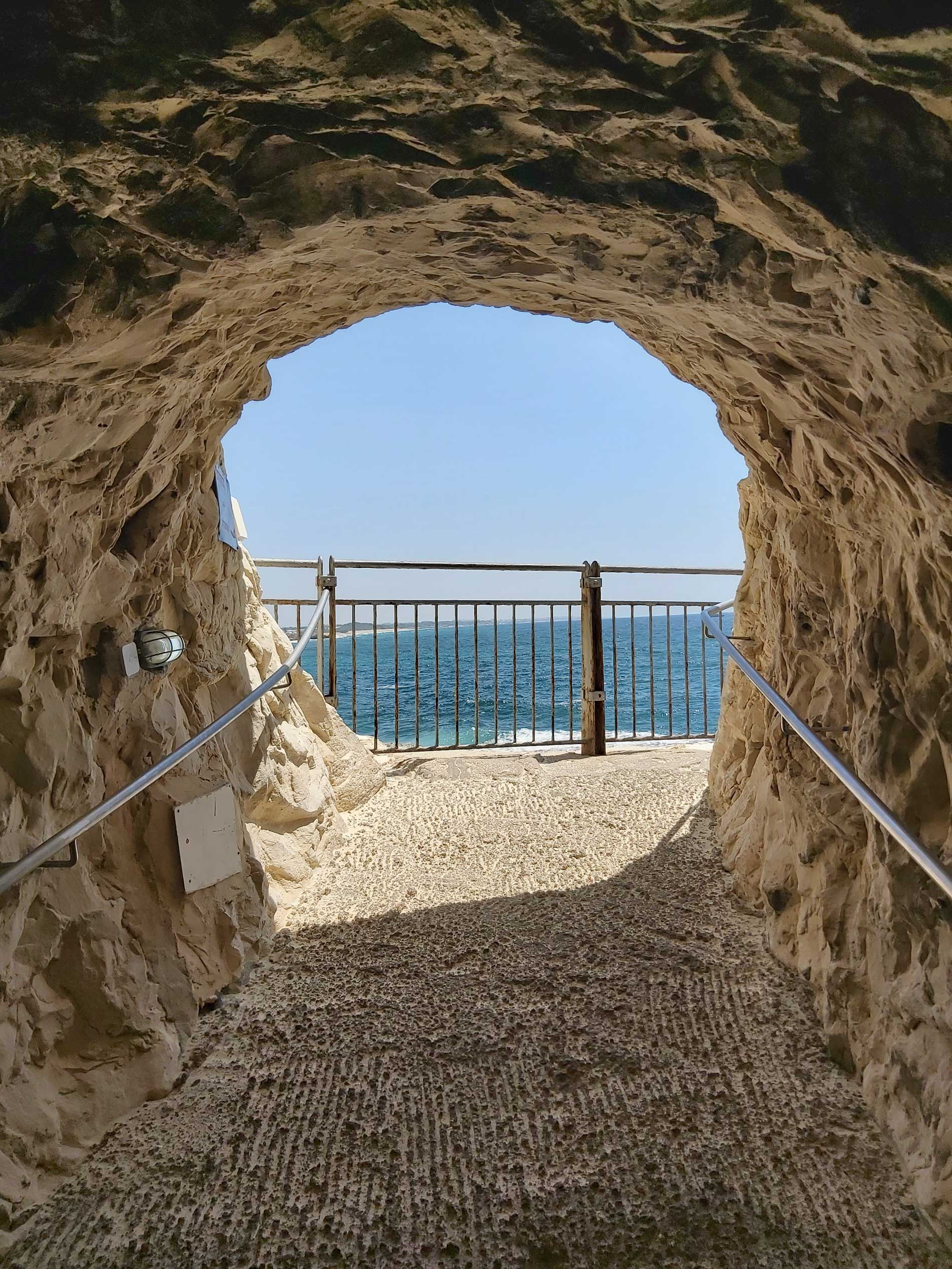 When the British Mandate ruled in Eretz Israel, the British started making a railway line between Haifa, Israel and Tripoli in Lebanon. The rail line was dug into the cliff of Rosh Hanikra. In 1968 a second tunnel was made to connect both grottos with each other. The tunnel stands till today and is now part of the tourist site and is now showing a video about the wildlife that can be found in this region. It also made the accessibility of the place a lot better.

For the longest time the only way to reach Rosh Hanikra was by sea. Native swimmers and divers were able to make their way to the natural cave systems until the tunnels helped to improve the accessibility. Not long after they build a cable car taking visitors down from the top of the cliff to the tunnels. The 60 degree gradient the cable car makes is advertised as the steepest in the world. 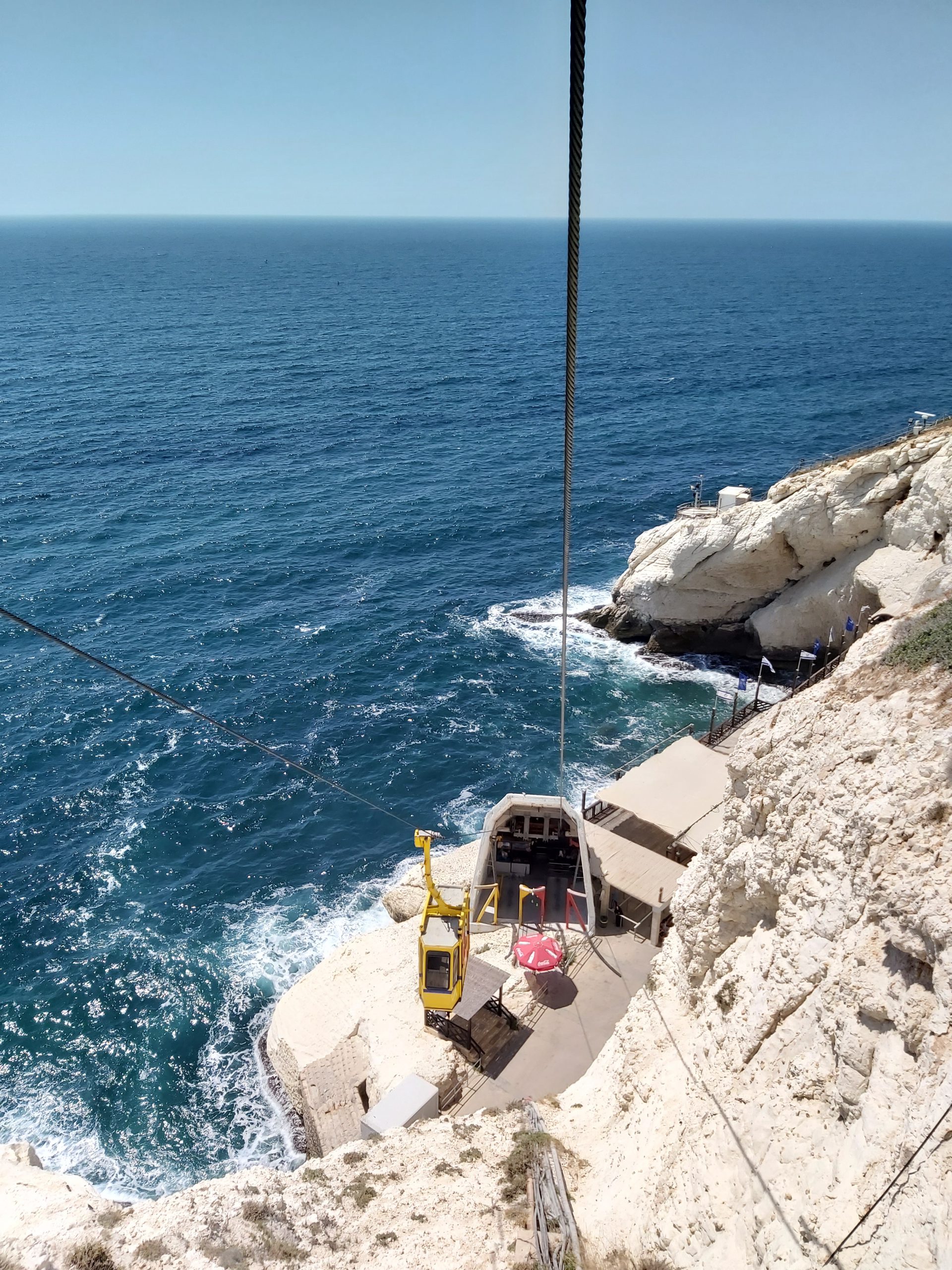 The cable cars at Rosh Hanikra. Photo by Emiel Aarten

Since then tourists from around the globe come and visit Rosh Hanikra. It really is a beautiful piece of the country and I would highly recommend visiting this natural site. There is a restaurant overseeing the sea and the obvious tourist facilities.

The town Rosh Hanikra itself is a small kibbutz. For those who are unfamiliar with a kibbutz let me sum it up for you in short. A kibbutz is a type of settlement that is unique to Israel. It offers a collective community traditionally based on agriculture.

The kibbutz is a multi-generation and rural settlement which is characterized by a collective and community based lifestyle, democratic management and responsibility for the welfare for each and everyone that is part of the kibbutz.

The first kibbutz was founded by pioneers back in 1909 and as today there are over 270 kibbutzim found here in Israel.

You can volunteer to work in a kibbutz. Be prepared to work hard and share accommodations with others. One of the most famous celebrities that volunteered in working at the Rosh Hanikra kibbutz is Sacha Baron-Cohen who is an actor famous for portraying Borat. 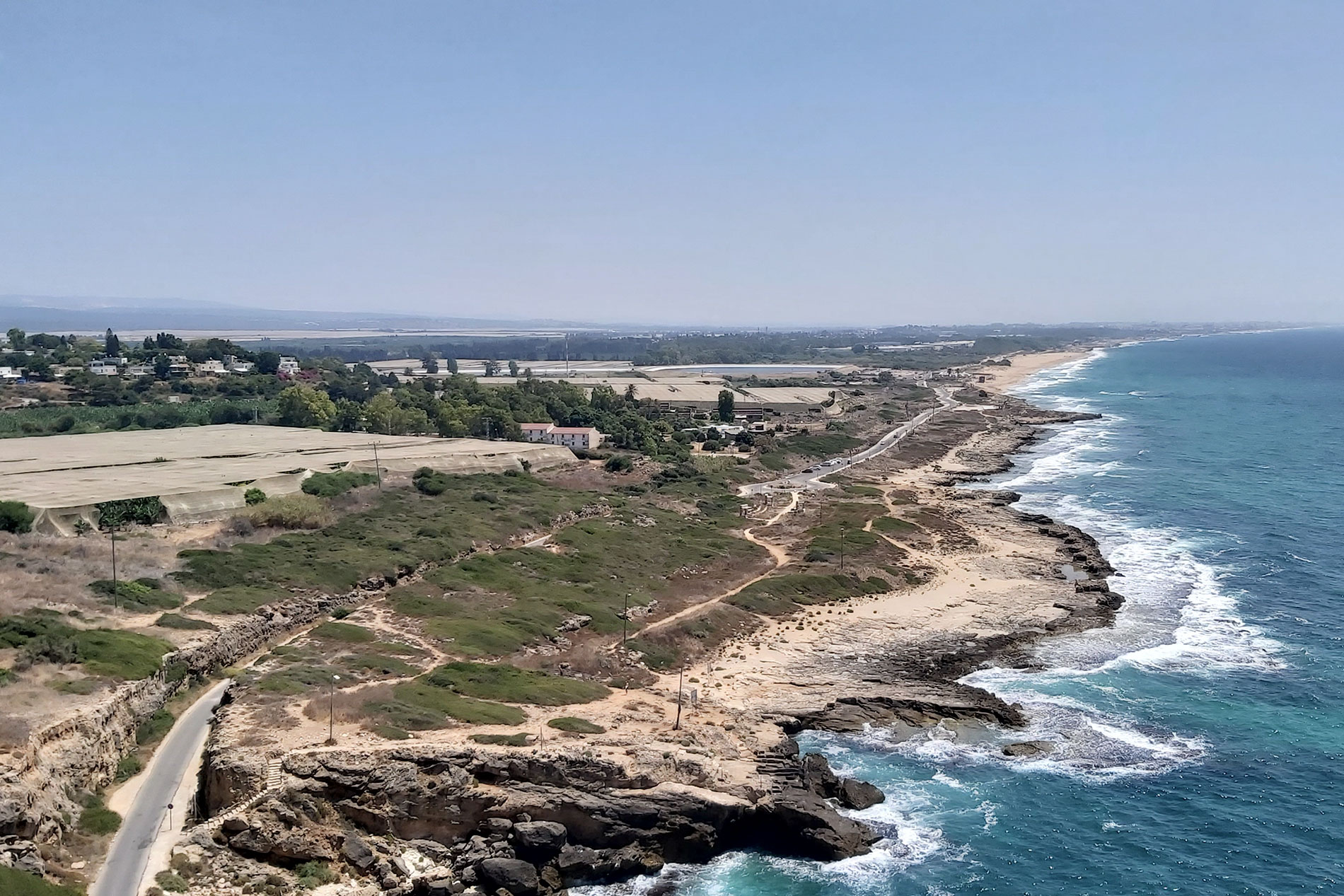 Seeing the farm land on the left with the kibbutz in the distance. Photo by Emiel Aarten

So let’s end with a little sneak peak of some stuff that is coming in the future. With the lockdown almost over Aviya and I are brewing some nice travel plans for the future. I don’t want to say too much but if it’s coming all together it’s gonna be a pretty amazing day/night trip. Stay tuned to find out what we are up too!

Also as some of you know I used to go to a lot of concerts. You can read a few of the reviews of concerts I did on this blog already. However the goal is to publish a lot more in the near future. So click here to read them all! 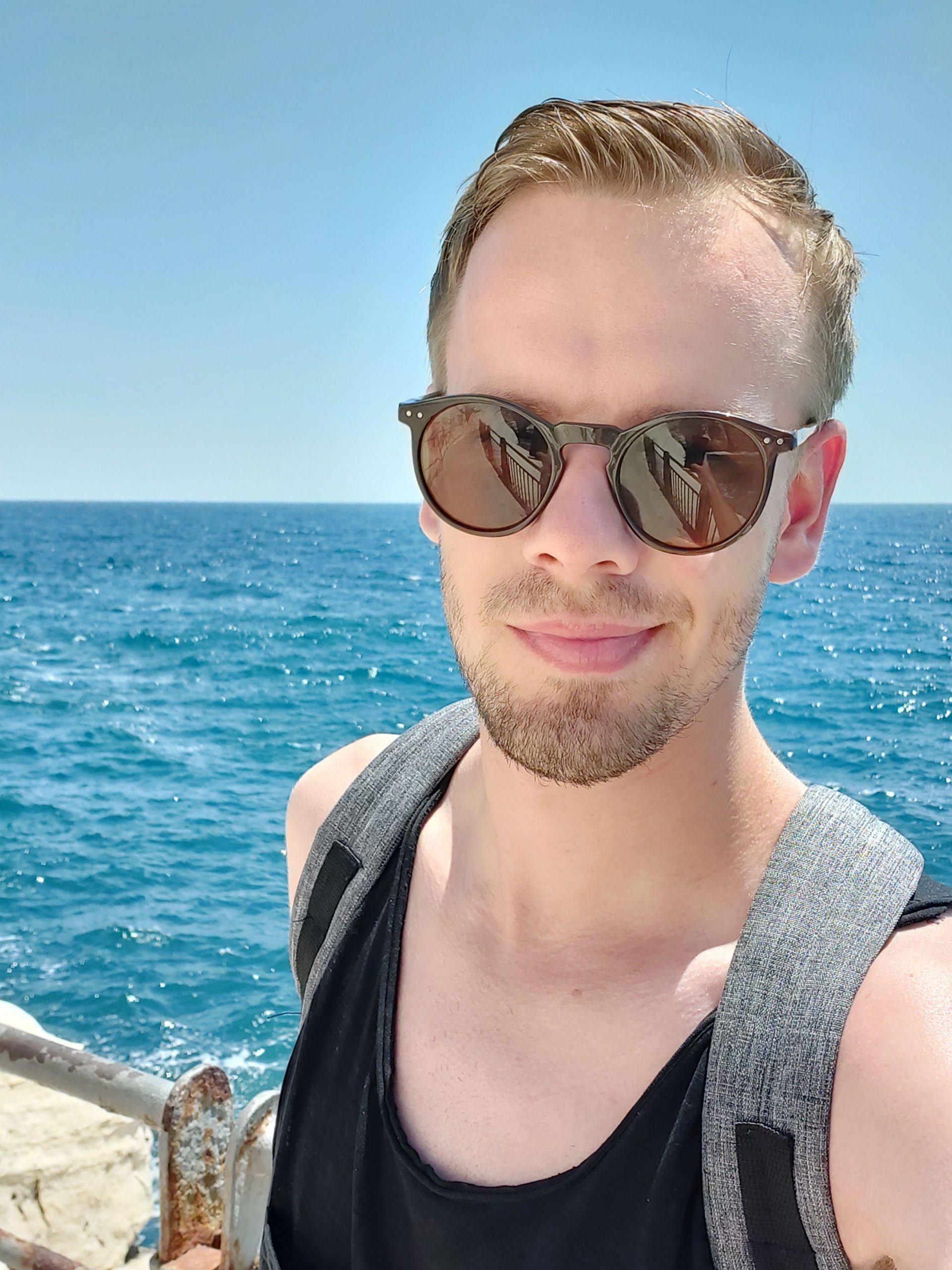 Throwback Thursday: Seeing some of Israel’s beauty at Masada, En Gedi and the Dead Sea!