Disney Fantasia and Fantasia 2000 are cult classics for diehard Disney fans. The last few days the Fantasia movies have come to life by the Israel Philharmonic Orchestra in a spectacle that combines live classical music and the movies.

Without a doubt, it is very easy to say that Walt Disney’s Fantasia movie might be the greatest animated movie in the history of the genre. The idea to take some of the best classical pieces of music and create animated stories around them works perfectly. Often you will see that the animated sections are made first and that the music will be based around it, but with Fantasia, Disney did it the other way around.

The Fantasia movie is a timeless masterpiece created by Walt Disney in the 1940s. Fantasia features eight sequences that combine classical music with innovative animation.  The most famous sequence is by far The Sorcerer’s Apprentice, which featured Mickey Mouse in his iconic and magical outfit.

We know Disney’s Fantasia is a classic now, but back in the day, it really was not the case. The Fantasia film was acclaimed by the critics but failed to make a profit due to the outbreak of World War II.  It is by far the best animated film ever made. A statement that not every animated film can say or beat. 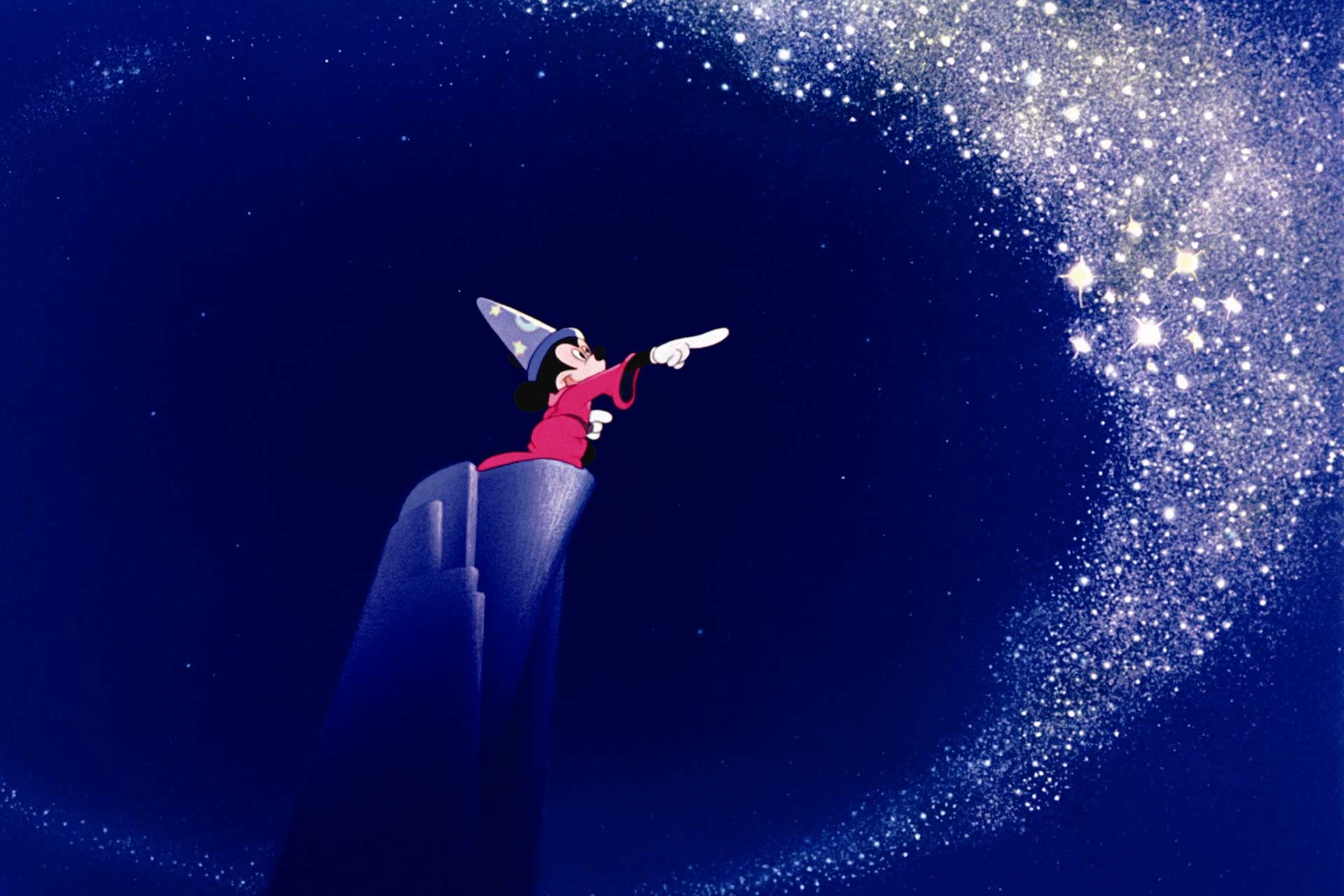 It took a while, but on December 17, 1999, Disney released the sequel to Fantasia called Fantasia 2000. This was a cinema showing with an orchestra playing to the movie. The cinema release followed in June 2000. In Fantasia 2000 we see Mickey Mouse Fantasia robes make their return to The Sorcerer’s Apprentice. That however was the only animation sequence that came from the original movie. The other seven sequences were newly developed for the film.

The conductor of the Israel Philharmonic Orchestra is Lahav Shani. A young, but very ambitious Israeli conductor and pianist became the orchestra’s musical director back in 2020.

Over the years, the Israel Philharmonic has been performing with the country’s best singers for special shows. However, the orchestra otherwise performs around 150 shows within Israel a year and 40 abroad. Because classical music is not everyone’s cup of tea, the initiative came along to do a movie-themed show, so other generations would enjoy going to these types of shows. In America and other countries, the success of the Fantasia orchestra shows when another famous orchestra has hit the road with it. Now it is time for the Israel Philharmonic to show its take on these classic Disney movies.

Review of the show

The show started with a song and clip of the Fantasia 2000 movie called 5th Symphony. As some classical musical lovers might know, it features music from Ludwig van Beethoven. Fantasia 2000, the movie, started with this clip as well, and it was a fitting start to the show. Coming into this show, I didn’t have many expectations. I love the movie, but I never felt it needed the live orchestra. However, seeing it live was fun and did add some dimension to the music.

The Nutcracker Suite with music from Pyotr Ilyich Tchaikovsky followed. The music is famous for being part of Christmas, so in a way it did fit the night. It comes from the original 1940 movie, and it shows tiny fairies sprinkle dew drops on all the flowers in the meadow as drawn breaks.

An unused piece for the movie Fantasia, followed by the name of Clair de Lune. This segment never saw the day of light until being released in 1996. The segment was cute, but my favorite of the first part of this live show came with The Firebird Suite. In Fantasia 2000 it was the last part of the movie, and it is a Grande finale with music from Igor Stravinsky.

The Firebird Suite tells the story of an elk waking up the spirit of spring and bringing color after a harsh winter. When the spirit reaches the top of the mountain, leaving a big trail of new life and color behind, she touches a volcano who aims to destroy it all. It succeeds, and it leaves the spirit hopeless, until the elk returns and brings her strength to do it again and bring all the color and life back to this valley. The music in combination with the story is absolutely amazing and one of my favorites of this movie! The Philharmonic Orchestra absolutely nailed it with this piece. 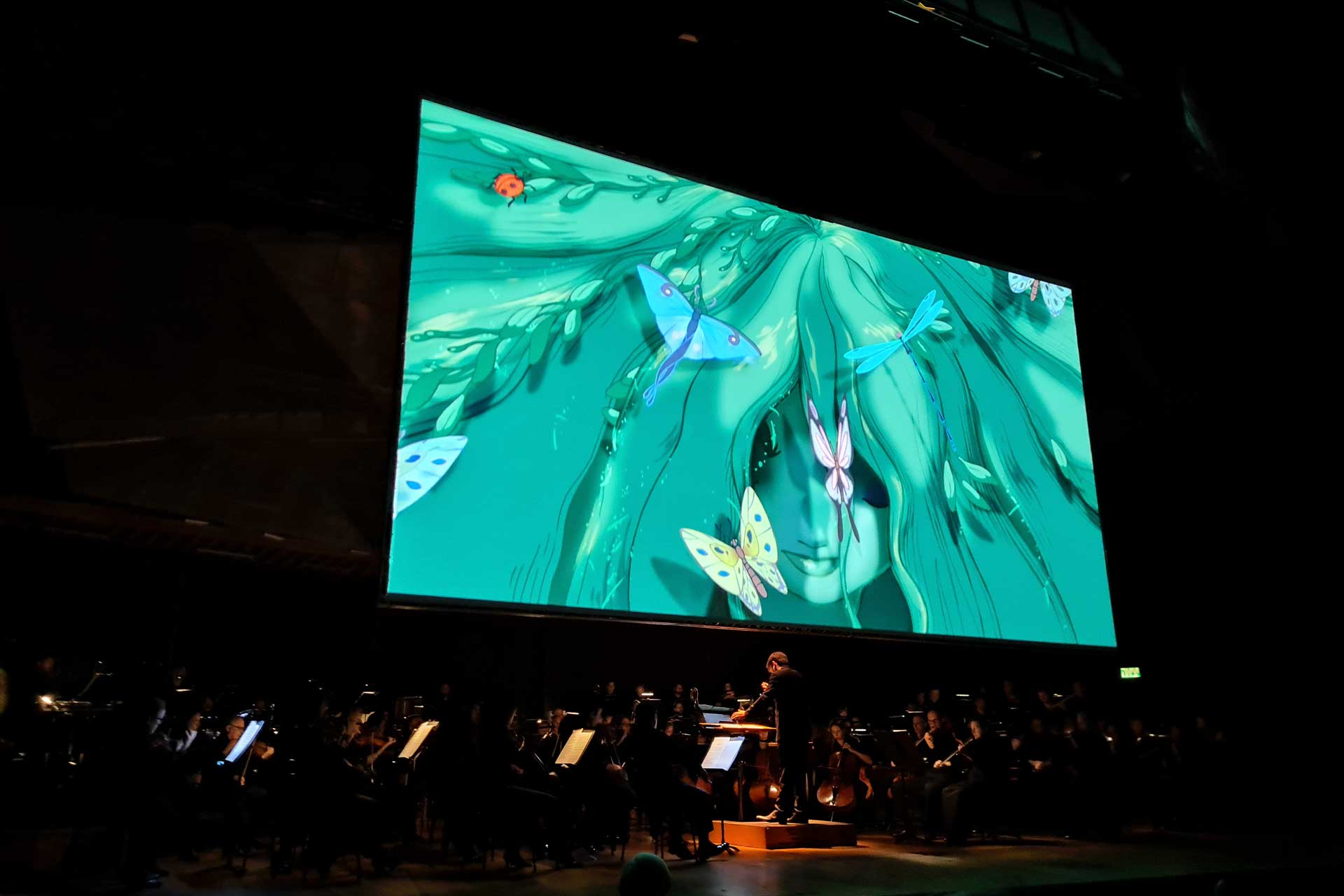 As part one came to an end, I have to say I was pleasantly surprised at how fun it was. I was worried the show would be something like “I could have seen this on the TV with a bag of chips”. However, the live orchestra really did give an extra dimension to the movies we saw on screen. The Philharmonic Orchestra delivered a great piece of music and with the visuals brought it to life.

After a short break, the orchestra made its way back to the stage, with musical director Lahav Shani taking command once more to start Dance of the Hours. Although it is a great piece of musical with some great animated visuals it is the next piece that is the crowd pleaser: The Sorcerer’s Apprentice.

The famous segment is the only bit that is both in Fantasia as in Fantasia 2000. The iconic segment sees Mickey working for a magician cleaning the floors. When the magician goes to sleep, Mickey grabs the magicians had and starts ordering the broom to clean and fill up the water. In true Mickey style it goes all wrong and in the end the magician has to help out. The live orchestra really made this segment more special and by the amount of applause, it was very well received by the crowd.

Another classic Disney character made their way onto the big screen in the segment Pomp and Circumstance. This segment comes from Fantasia 2000 and features Donald and Daisy Duck. The composition has the same name and has been written by Edward Elgar. The story is based on Noah’s Ark and in classic Donald style all goes wrong until the very end. I really loved this clip, and it might be my favorite of all the movies. The Pines of Rome ended a great evening of classical music meets Disney Fantasia’s. 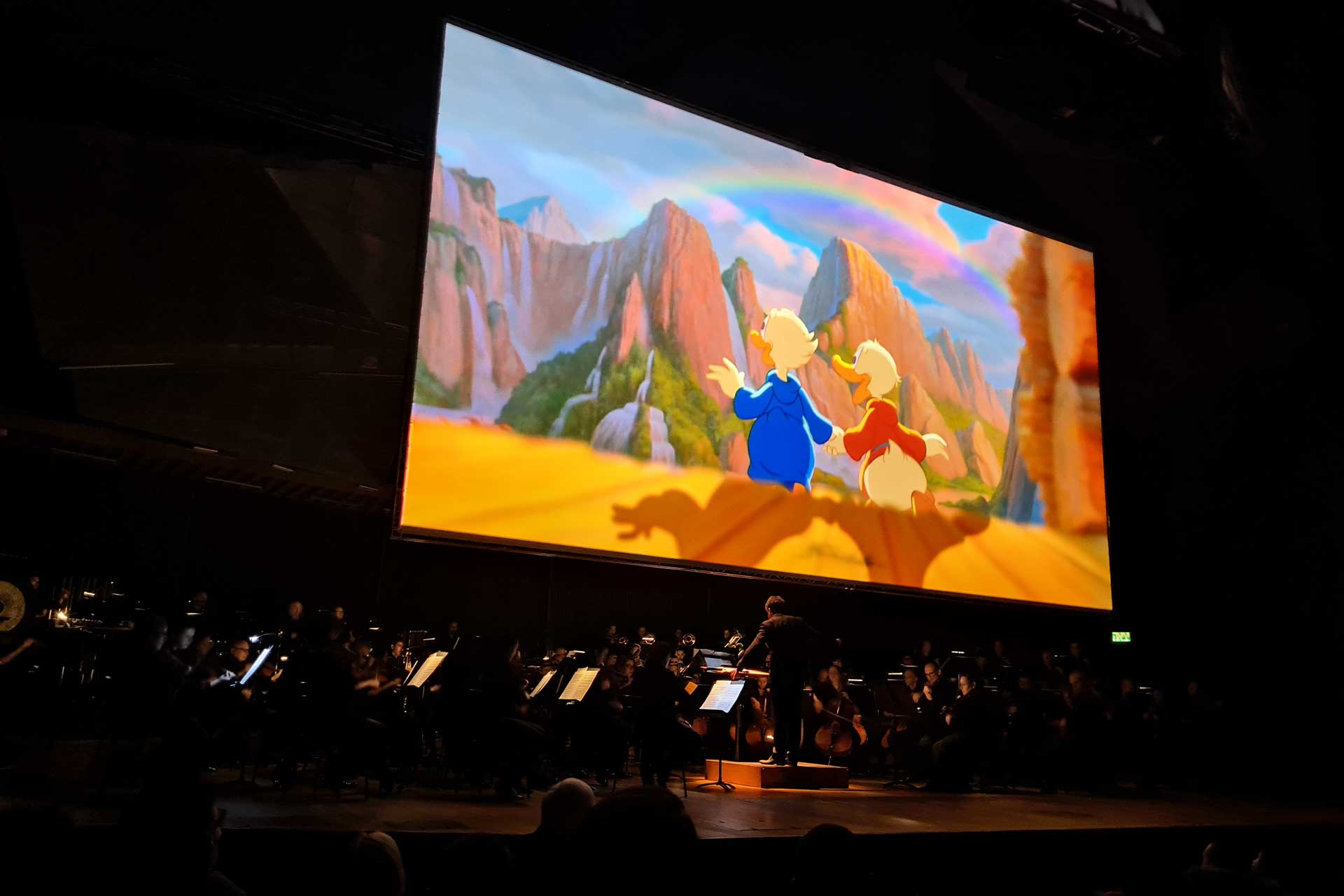 So what did I think after seeing my first classical music concert (apparently Whitesnake isn’t classified as classical music, who knew..)? Well, it was a fun show. Hearing the music being brought to live really gave an extra dimension to the music. With some minor here and there (for example the thunder being too early compared to the screen) the Philharmonic Orchestra sounded great live.

Bringing shows like this to different generations shows that classical is fit for everyone.  It is fun and interesting to listen too. All in all, it was a fun night out! 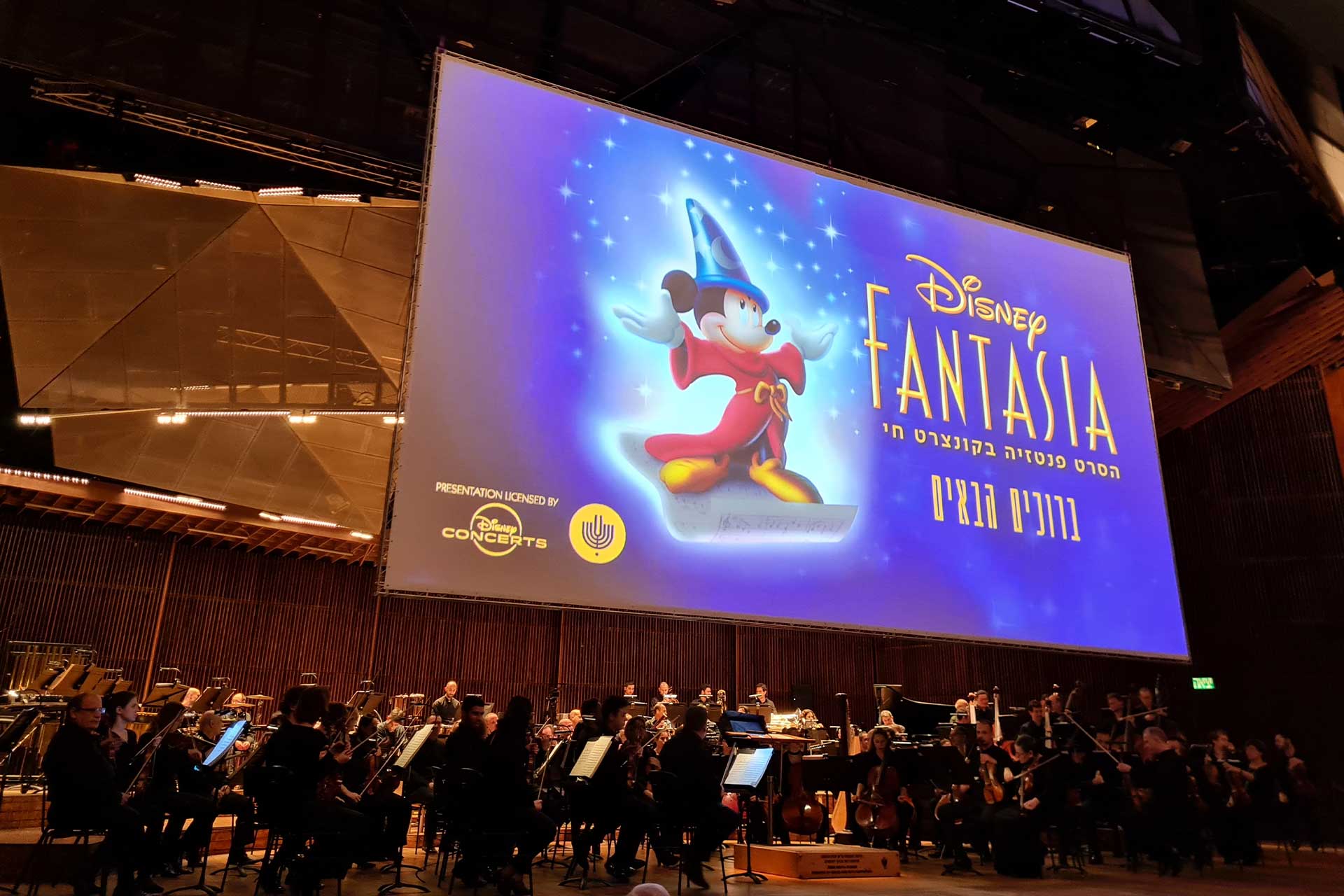