For over 40 years, the American rock band KISS made a name for themselves. Their music and spectacular live show are one of a kind. After being absent for seven years, KISS came back to Glasgow.

Founded in New York, KISS saw the day of light back in 1973. Soon the band became infamous by their exciting live performances. The face paint and the extravagant costumes are already an eye-catcher. It was however the blood spitting, explosions and fireworks that gave the band the name “the hottest band in the world”. A name that they still carry with pride over 40 years later.

Worldwide, the band has sold over a 100 million records, giving them a whopping 25 golden records. With the song I Was Made For Loving from the Dynasty album, KISS got themselves a number one hit around the globe. In 2014, the band was honoured in the Rock & Roll Hall Of Fame. This event didn’t come easy for the band, and they are very grateful to their large group of fans, called the KISS Army, who made this possible.

Current band members Paul Stanley, Gene Simmons, Tommy Thayer and Eric Singer are currently touring their KISSWorld Tour. The tour returns to Europe after 2 years of absence, and it is already a success, with several sold out concerts. After being absent for 7 years the band came back to Glasgow where I saw them.

The opening act isn’t completely unknown to KISS fans. The lead vocalist is Evan Stanley, the son of Paul. The Dives is a new band, which is based around power pop. Influences of The Beatles are noticeable and in Glasgow they play their first ever Arena show. Promoting their debut EP Everybody’s Talking. The band is new, and you can see that in the performance. The music is good and with just a few more shows the experience of big crowds will make the live performance even better. The Dives do their best and the crowd enjoys their effort, music and show. They played Make It Like The Movies, Man Oh Mandy and a few other songs and covers. 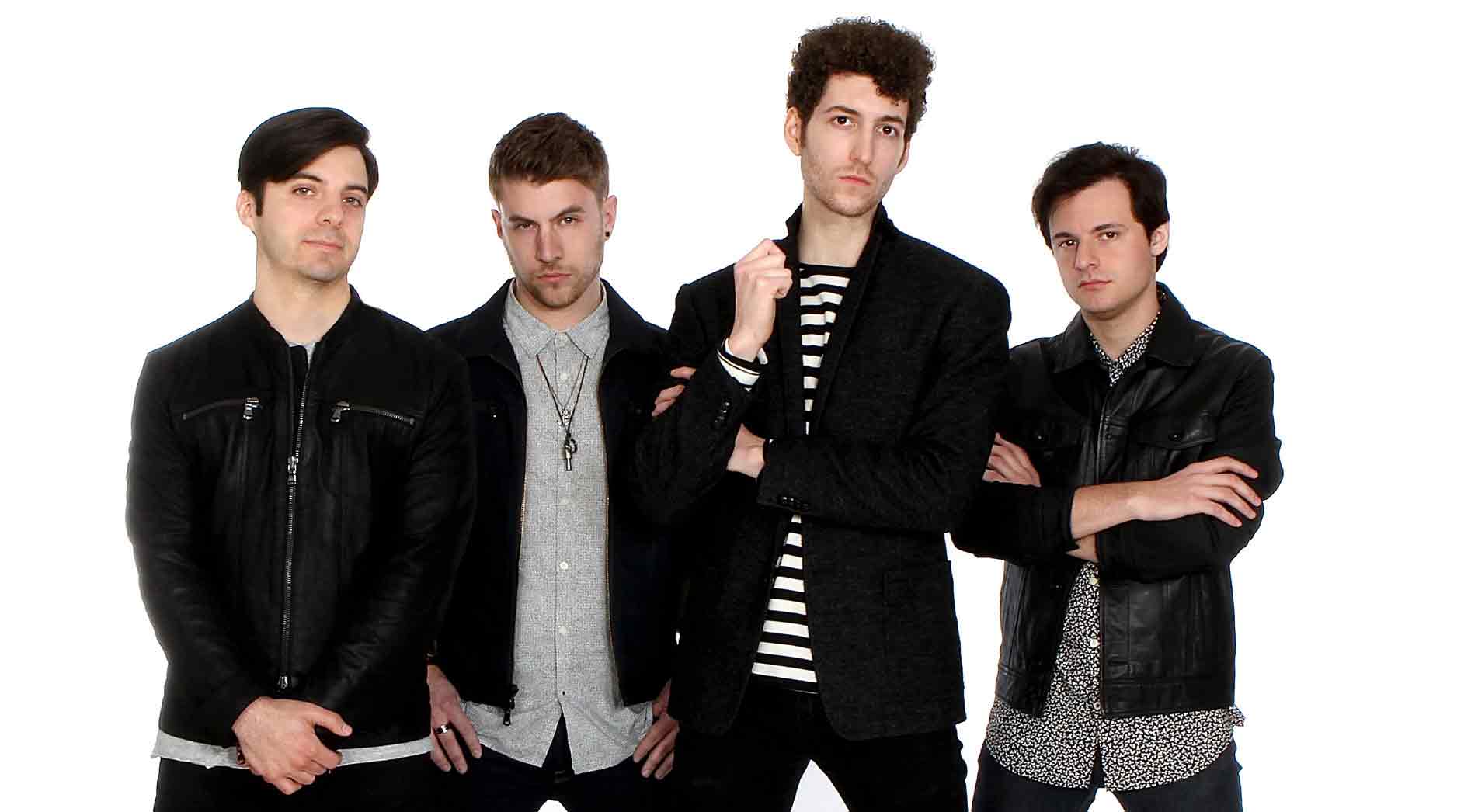 After Led Zeppelin’s Rock N Roll the house lights went out. The crowd went crazy as the announcer shouted his oh so famous words: “All right Glasgow. You wanted the best, you got the best, the hottest band in the world, KISS”. And that was the sign, which kicked off the show. The curtain dropped and with lots of smoke and pyro Gene, Tommy and Paul made their way down on a hydraulic platform. With Eric in the back of the stage bringing the main beat to the opening song Deuce (1974). Shout It Out Loud (1976) was next, with Gene pleasing the crowd with sticking out his tongue. Paul was showing of his dancing moves and posing for the cameras. 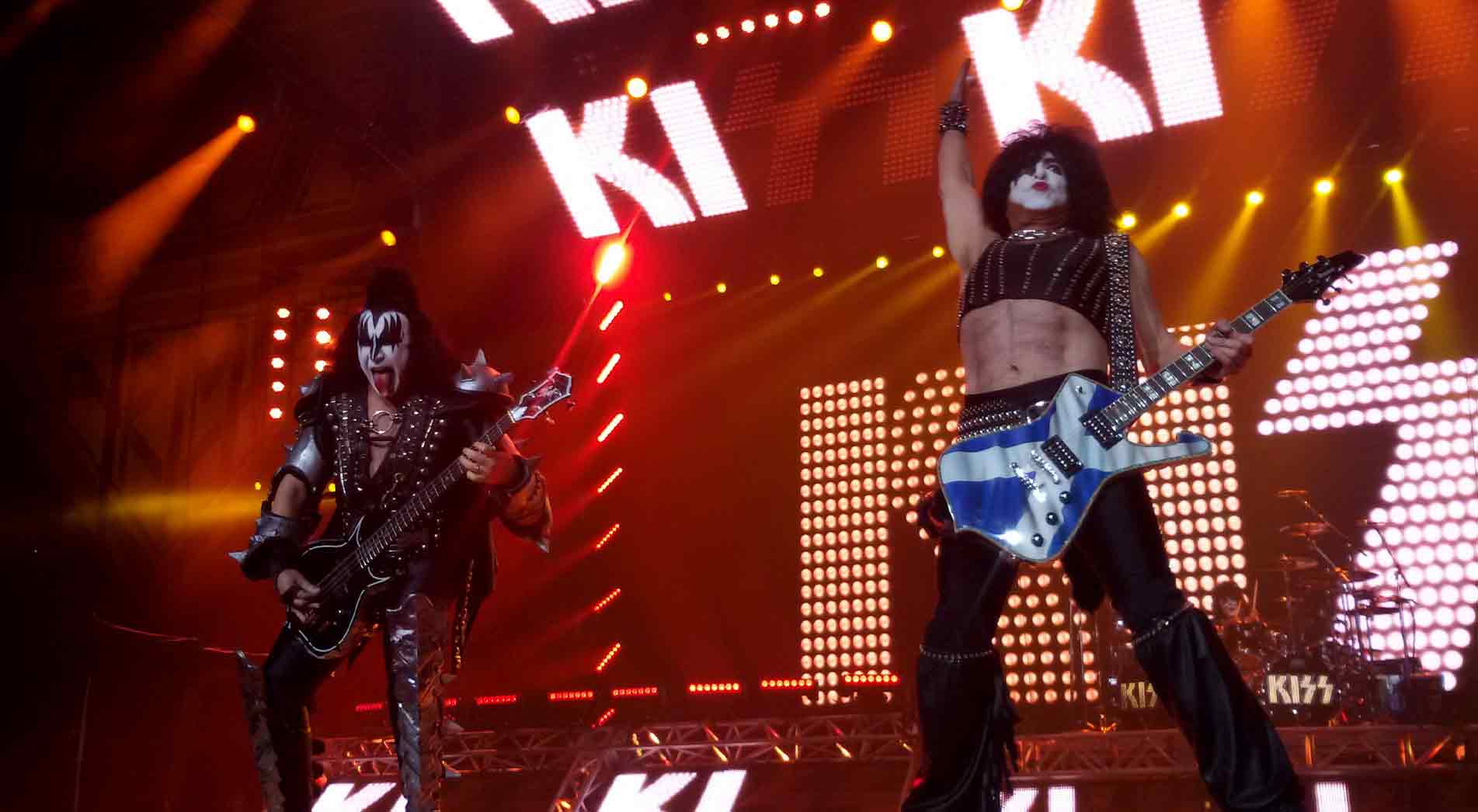 The start of the show went quick, but for a minute the band paused and paid tribute to the victims of the Manchester Arena attack just a week before. After a quick monologue, the band went into a minute silence.

Our thoughts and prayers are with the families and friends of those affected and all the people of Manchester at this difficult time. We are with you and you are in our prayers. – KISS

After the silence, it was time to get dirty with the song Lick It Up. Glasgow loved the banter from Paul before he started the song. Lick it up was the first song KISS released without makeup in 1983. Till this day it is a household classic. When it came to the solo, Tommy and Paul were lifted a few feet above the crowd. Lick It Up was followed up with I Love It Loud (1982) and Firehouse (1974). Firehouse ended with Gene breathing fire.

Shock Me (1977) is now the song that is sung by Tommy Thayer, and he ends the song with a guitar solo which is made complete with a rocket firing guitar. Tommy shows the Spaceman character fits him, and his singing style fits the song. With the last rocket fired in the air, the next song of the 18 song long set list is Flaming Youth (1976).  It featured a video featuring the history of KISS with Ace Frehley, Peter Criss and Eric Carr.

The lights went out after Flaming Youth, and it was time for the bass solo of Gene, better known as the Demon. His solo is famous for the blood spitting and flying up to the roof. The stage is covered with smoke and after shouting “Oh Yeah” Gene started his signature song God Of Thunder (1976). Crazy Crazy Nights (1987) was a true sing-a-long and from there we went to War Machine (1982), Say Yeah (2009) and Psycho Circus (1998) in which Paul went flying over the crowd to go to his rotating platform.

With Paul still being on the rotating platform started the intro of Black Diamond, one of the self-entitled album from 1974. With Eric Singer on vocals, Paul made his way back to join Gene and Tommy for Black Diamond and let all the space for Eric to shine. The end of the song went straight to the beginning of the final song of the main set: Rock ‘n’ Roll All Nite (1975) accompanied by a lot of fireworks, confetti and lots of dancing. With Singer’s drum kit rising above the arena and Gene and Tommy making a spin around the arena with mobile cranes, it was time for Paul to smash his guitar. The cheering of the crowd was overwhelming and bringing the show to an ultimate fireworks climax.

After taking photos with the crowd, it was time for an encore. Starting with I Was Made For Loving (1979), the band showed that the once criticized song for being too disco is a real rock song in which the crowd loves to sing along to. This song showed Paul not being able to sing as high as he once did, and sometimes it feels like he struggles to come near. Even though, he makes up for it by his showmanship, and it gives Eric Singer the chance to show his great singing skills during the chorus. The show ended it with the classic Detroit Rock City (1976) from the Destroyer album. Tonight it might have been Glasgow Rock City and with a lot of fire the show came to a closure, they truly went out with a bang.

While the song God Gave Rock N’ Roll To You II played in the arena, I was reflecting on a great show. The band was on fire tonight. In all fairness, Paul Stanley doesn’t hit all the notes like he used to do. But times changed, and it still is a pleasure to see him do what he does. His moves, interaction with the crowd and showmanship is still on point and that makes him still the absolute Starchild. Tommy and Eric are great within the band, vocally, and musically they fit in, and they give a good vibe to the music. For the rest of the show was full of explosions, spitting blood and fire, and it was everything you can expect from KISS. They still are the Hottest Band In The World.

In 2019 I was KISS again in Amsterdam. Click here to read the review.

Golden Earring are rocking after over 50 years in Zwolle!