It has been said in the past, but KISS is currently on tour with their farewell tour. Under the name the End of the Road tour, the band stopped for a bombastic show in Amsterdam for one last KISS.

The history of KISS (or should we call it KISStory?) goes back all the way to 1973. Back then the band was formed by Paul Stanley, Gene Simmons, Ace Frehley and Peter Criss. Their over the top live show, costumes and on-stage presence quickly gave them the status of being the hottest band in the world. A title they still carry with a lot of pride!

Worldwide, the band has sold over a 100 million records, giving them a whopping 25 golden records. With the song I Was Made For Loving from the Dynasty album, KISS got themselves a number one hit around the globe.

KISS announced their Farewell tour with all 4 original members in the early 2000s. However, with the recruitment of Eric Singer on drums and Tommy Thayer on lead guitar, Gene Simmons and Paul Stanley kept on going. This time they are calling it a day and embark on a massive world tour to say their goodbyes to the KISS Army and legion of fans. 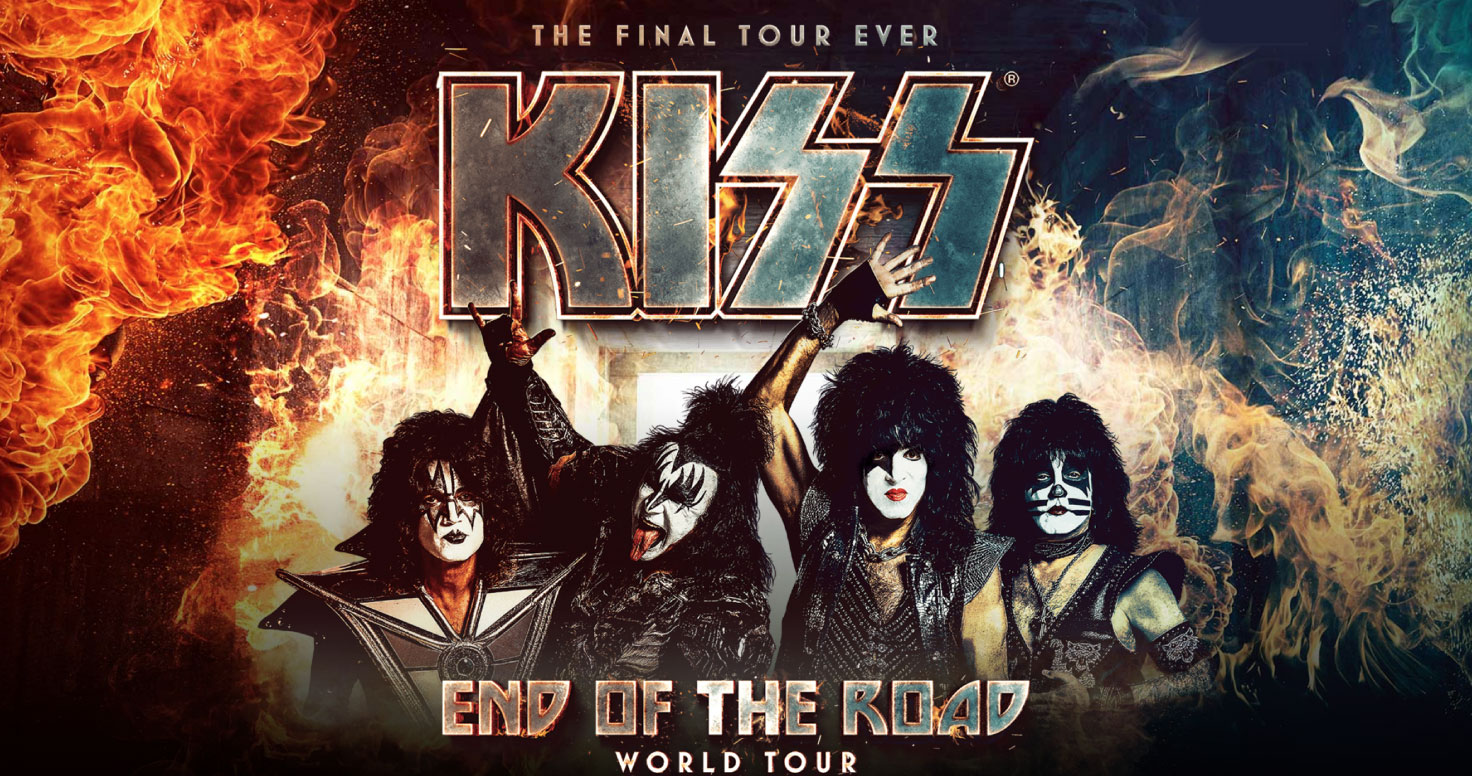 KISS are not strangers to doing things differently than other bands. So instead of having a band doing the support act, they invited painter David Garibaldi! The American performance art painter transforms the stage into his own art studio by throwing (and I mean throwing) paint onto the canvas. With subtle touches of paint brushes to add some structure, it didn’t take long to find out what he was creating.

Although it was something different and maybe not something the crowd initially would have liked as a support, David Garibaldi won the crowd over from the first second and grabbed the attention by painting AC/DC’s Agnus Young and on a second canvas Slash. His set ended with a special KISS painting that featured the text Amsterdam. It was a fun set to watch and definitely something different. However, we are here to KISS. 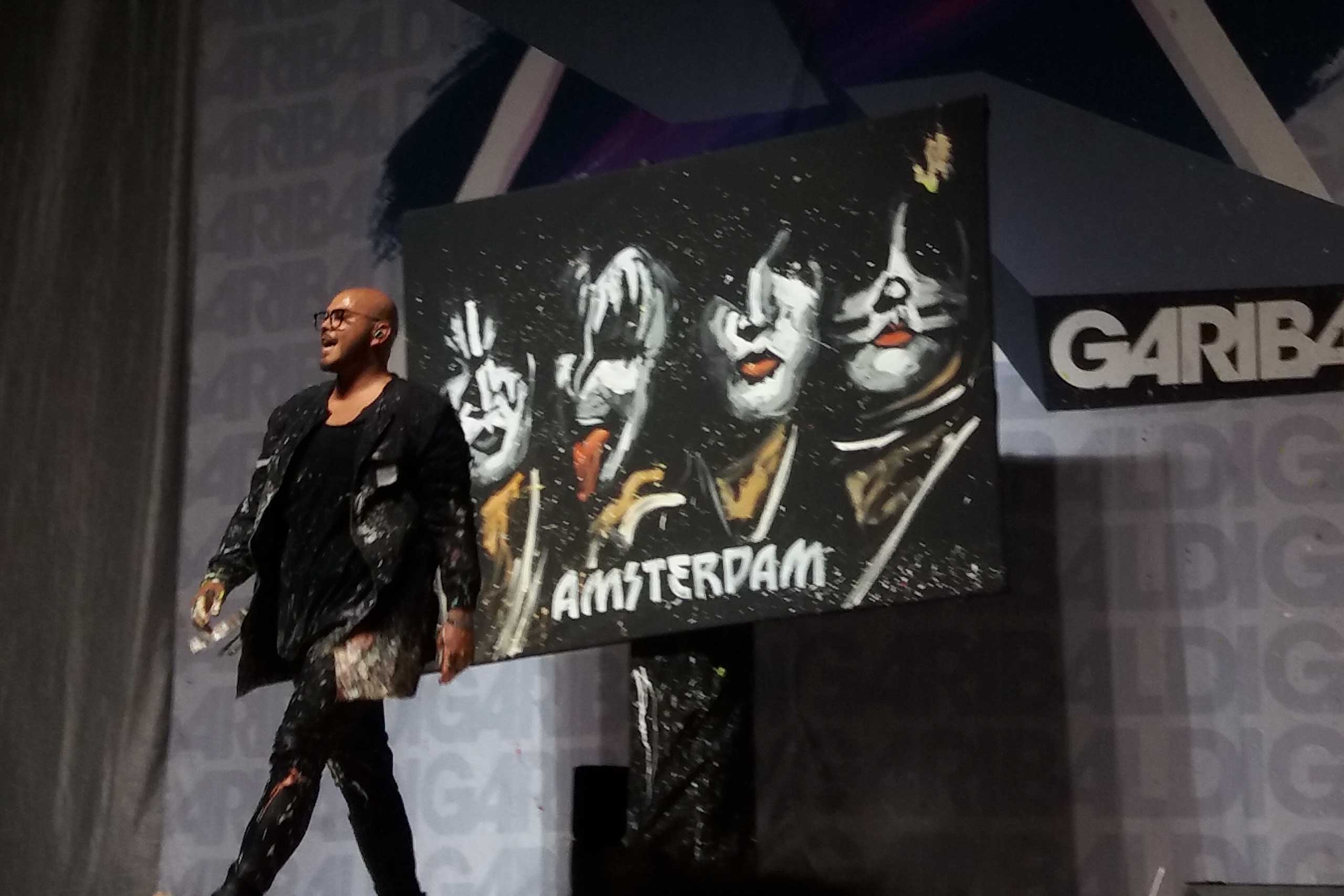 You wanted the best

As the last notes of Led Zeppelin’s Rock N Roll filled the sold out Ziggo Dome, the house lights went out, and the crowd went wild. As the announcer started shouting: All right, Amsterdam. You wanted the best, you got the best, the hottest band in the world, KISS”, it was the sign to let all the fireworks go off.

KISS doesn’t come on stage like most bands, they go all out! As the curtain dropped we saw Paul, Gene and Tommy come on separate hydraulic platforms down onto the stage. Fireworks, smoke and pyro filled the venue as the band kicked off with Detroit Rock City.

Shout It Out Loud

The crowd was singing along with every line as the band went into Shout It Out Loud and Deuce. KISS knows how to put on a show, with Gene pleasing the crowd with sticking out his tongue and Paul dancing and posing for the cameras.

A difference compared to previous tours was the use of new visuals throughout songs and the complete new stage set up! The LED pods above the stage looked great and added a lot to the big production of KISS. As you would expect with an experienced band like KISS the sound was on point. Vocals sounded on point and the instruments of the different members sounded well balanced. I know it’s going to be a sensitive topic when it comes to vocals. Although Paul Stanley doesn’t sing all the songs completely live it just fitted very well into the show. 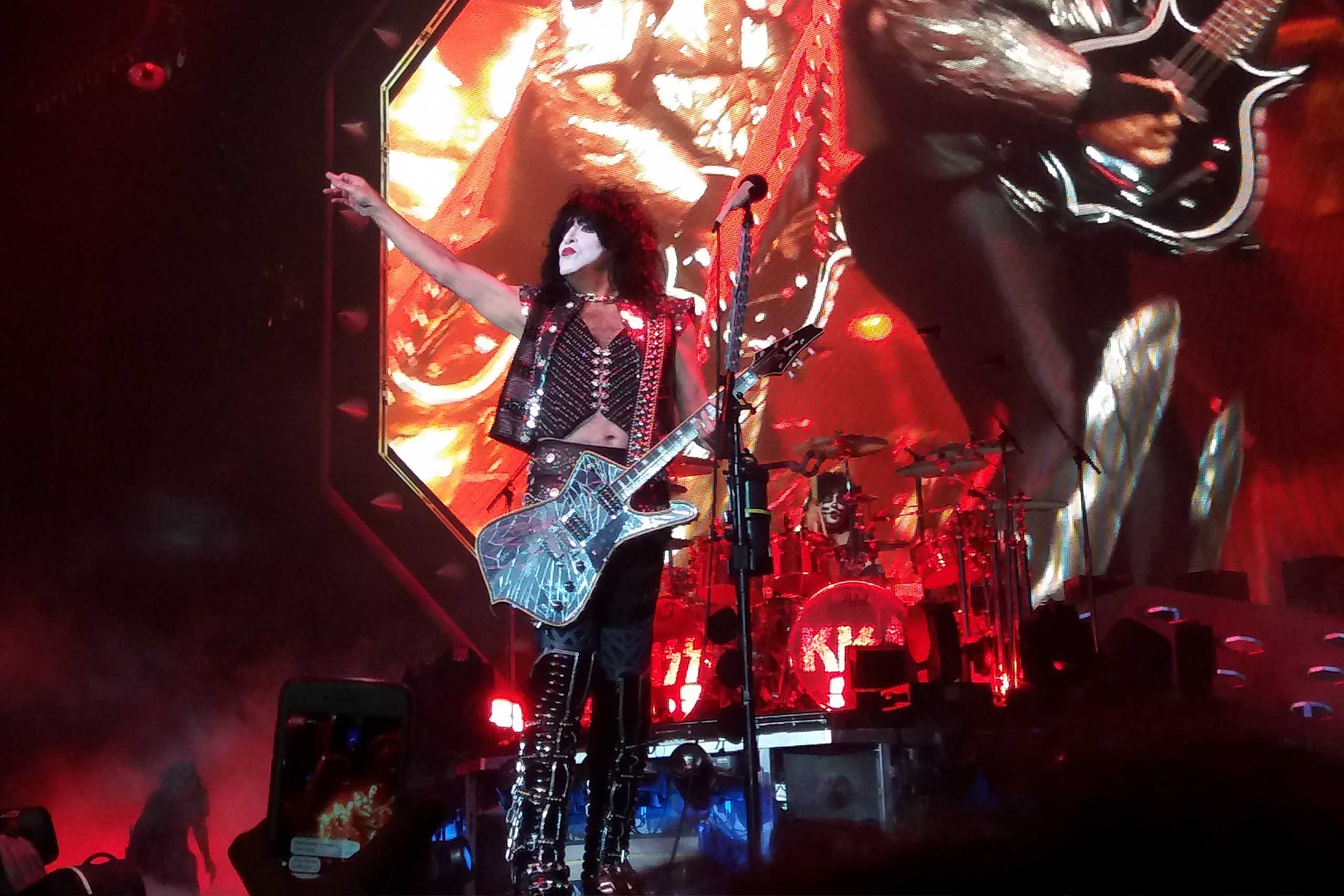 Say Yeah might have been one of the few songs that had the crowd less going. Coming from the 2009 album Sonic Boom, it was the only song in the set that came from a “recent” album. I Love It Loud, and Heaven’s On Fire kept the pace going and got the crowd singing and clapping along.

War Machine, a song co-written by Bryan Adams and Gene Simmons, followed. With Gene on vocals, the song really gives this darker vibe to the show. High flames that erupted in the end of the song only helped this vibe. It wouldn’t be a KISS show if Gene Simmons didn’t breathe fire, so to end this war song he held a burning sword and did his thing. 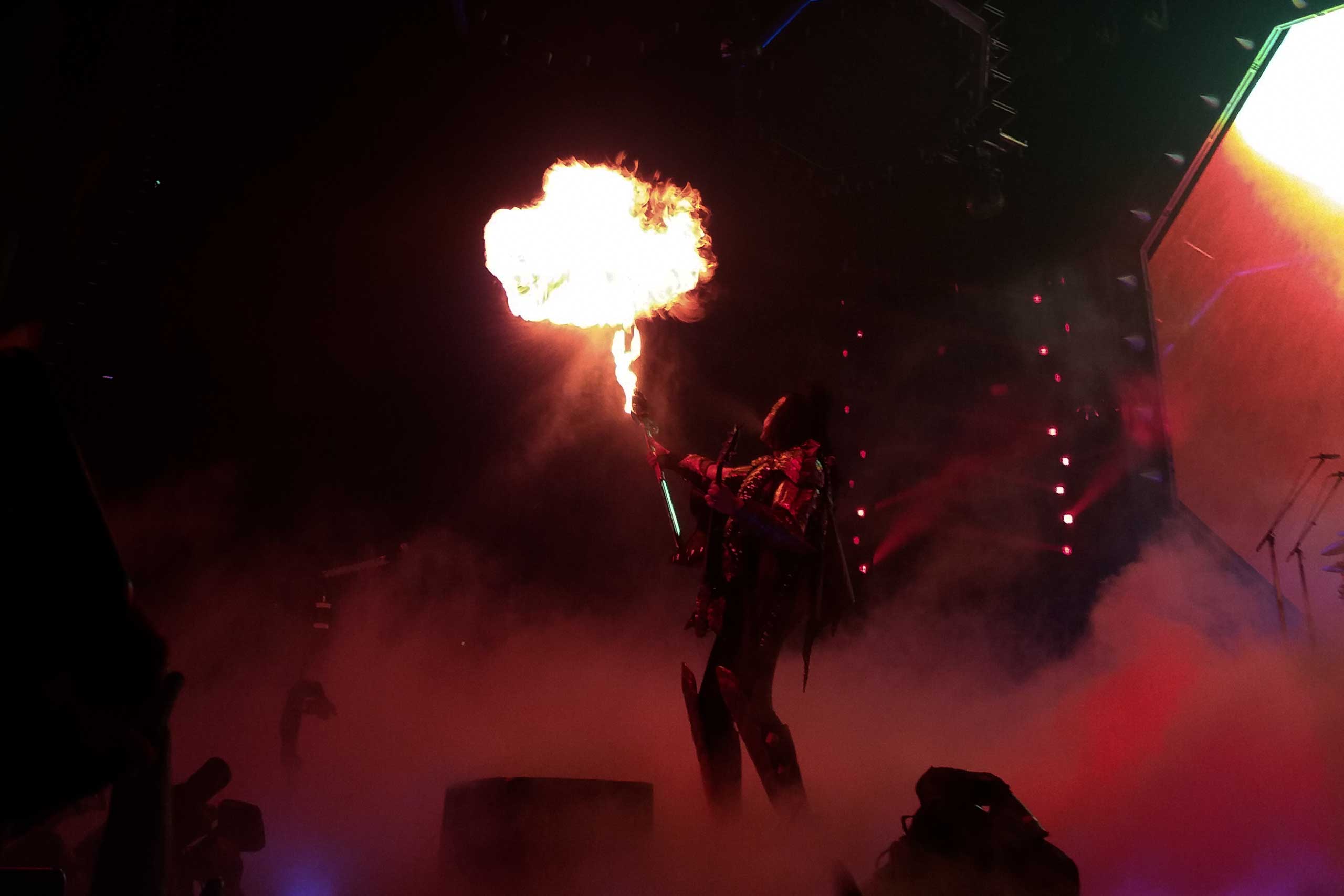 With Lick It Up, KISS showed their tongue in cheek love songs. During Lick It Up, Paul and Tommy performed a small snippet from Won’t Get Fooled Again by The Who. Vocal duties were once more given from Paul to Gene for Calling Dr. Love.

100,000 Years followed and saw a great drum solo by Eric Singers. The Catman is a highly talented and powerful drummer, and showed that once again in his solo. After the 2017 tour, which lacked an Eric Singer solo, it was good to see it return again during the End Of The Road Tour.

Cold Gin gave the opportunity for Tommy Thayer, aka the Spaceman, to show his skills. And not only that, he ended his guitar solo with his guitar firing rockets. In the end there was one solo left and that one was for Gene Simmons. As a tradition, he spits blood and flies up into the rafters to perform his own God of Thunder. The mixture of solo’s and songs made it great to look at. 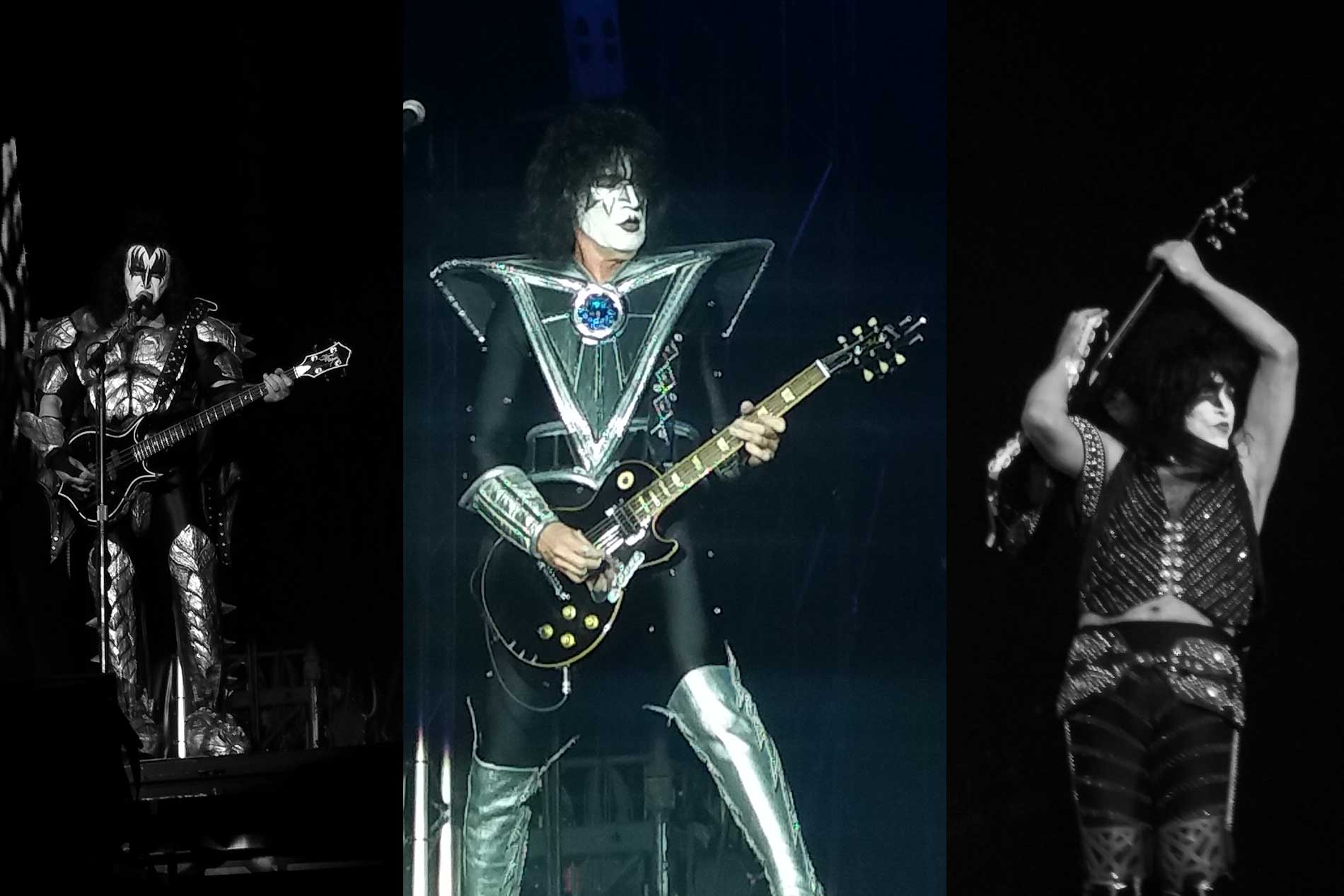 I’ve been waiting for this night to come

Psycho Circus saw the band pick up the pace again. This continued with Let Me Go, Rock ‘N’ Roll, which saw Gene, Paul and Tommy have a little solo together in the middle of the stage.

For Love Gun, Paul Stanley flew above the crowd to perform from the second stage in the middle of the crowd. It looked amazing to see the Starchild fly above the sea of people. He stayed there for the remainder of the song, as well, for the biggest hit of KISS: I Was Made For Lovin’ You.

With Paul being back on the main stage, the band kicked off Black Diamond with Eric Singer on vocal duty. His singing style really fits the song, and he is a great vocalist. After a great solo and some fireworks, the main set came to a closure. The band walked off and left the crowd wanting more. 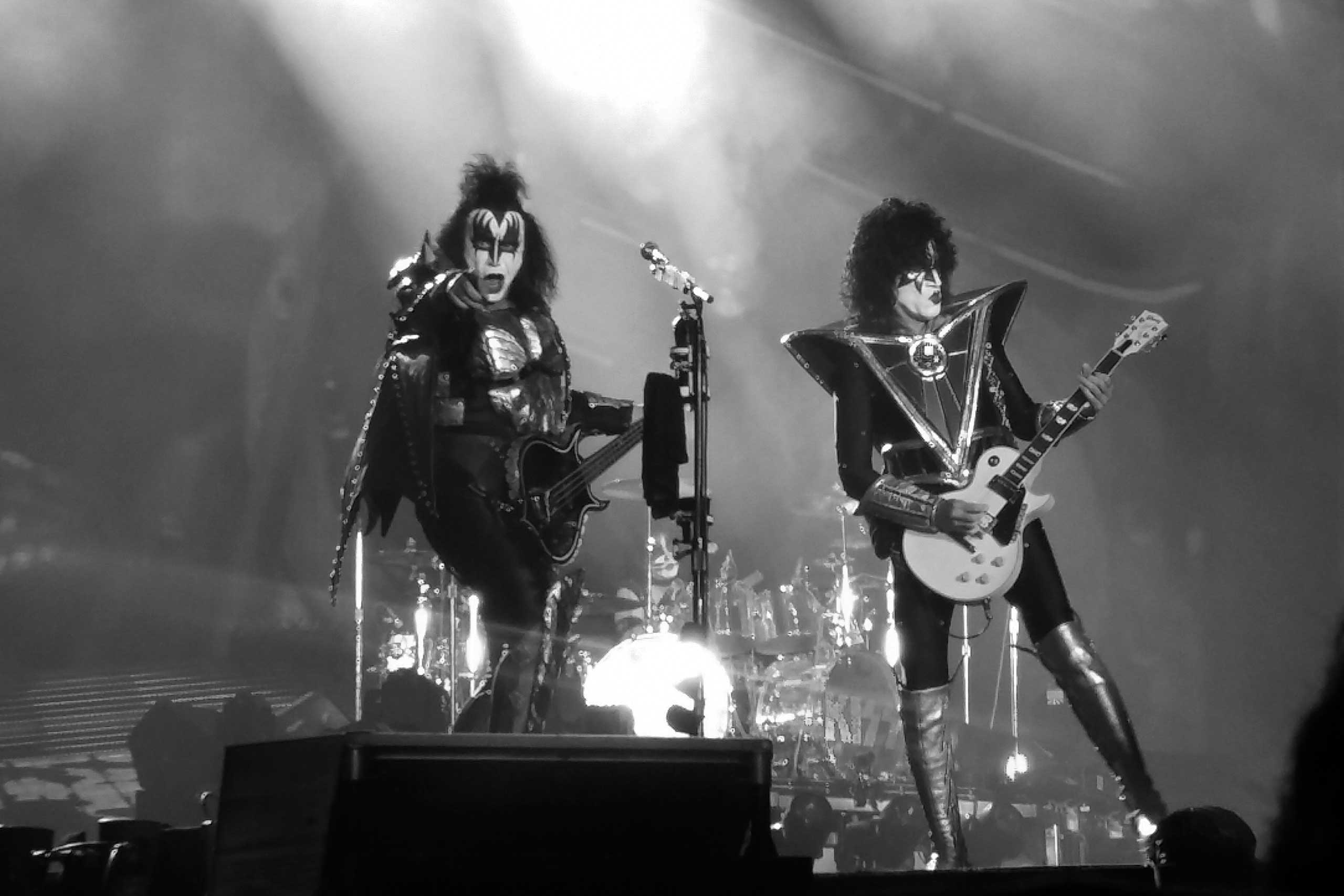 The show wasn’t quite over. Eric Singer made his way back on stage, performing alone with a piano. He played Beth, one of the few ballads of KISS. Near the end of the song, Tommy, Paul and Gene made their way back on stage and stood around the piano, showing the camaraderie within the band.

Crazy Crazy Nights followed with massive KISS balloons being thrown into the crowd. As a KISS concert, should it finish with Rock and Roll All Nite. The song went accompanied by a lot of fireworks, confetti and dancing onstage by Paul and the crowd offstage. Singer’s drum kit rose above the stage, with Gene and Tommy making a spin around the arena in mobile cranes; it was time for the ultimate climax. As Paul smashed his guitar on stage, the amount of fireworks and confetti that followed filled the arena. The crowd’s cheering was overwhelming. If this was the last time KISS playing in the Netherlands, they truly went out with a bang. 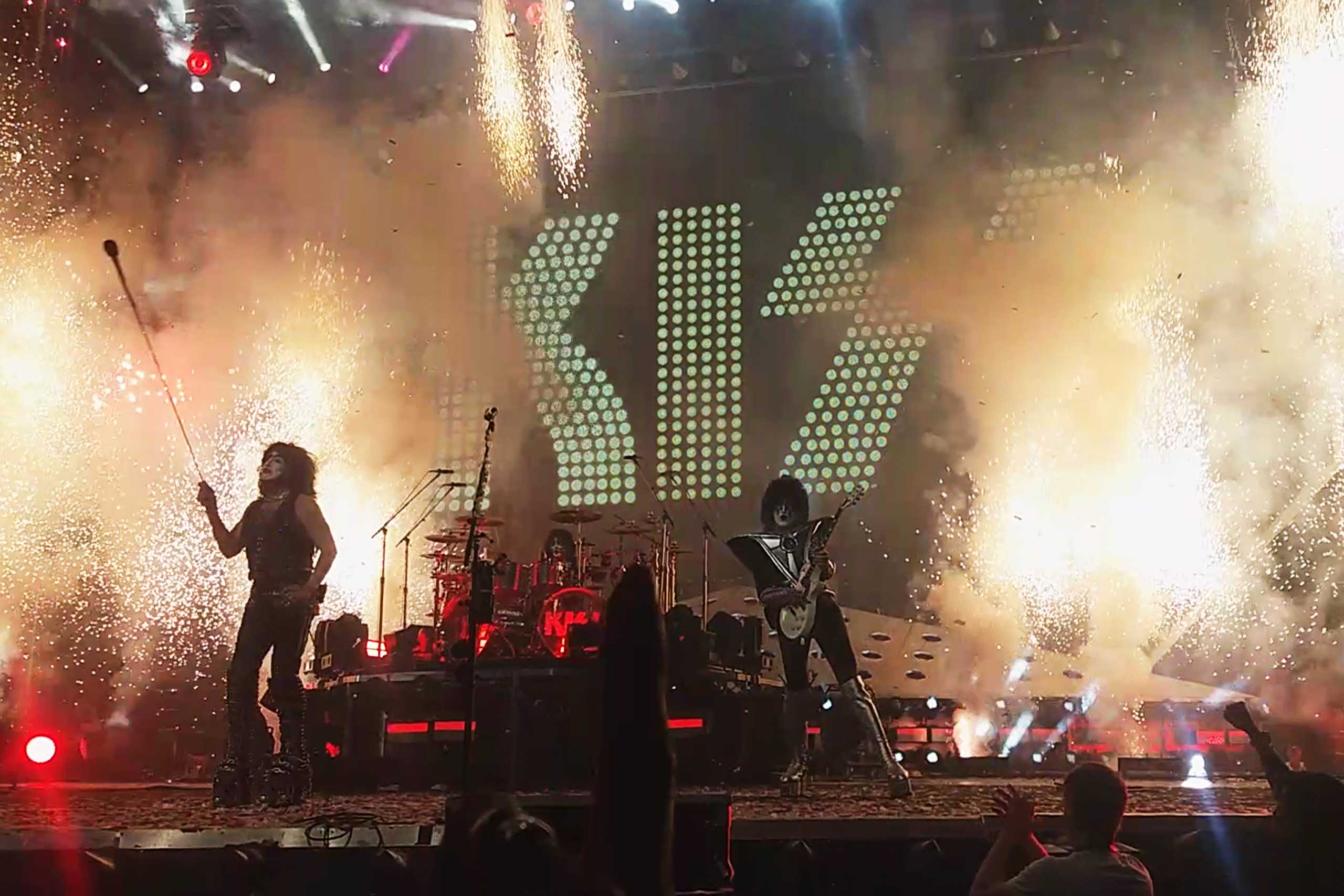 So while the song God Gave Rock N’ Roll To You II filled the Ziggo Dome, it was to catch my breath again. I love KISS, and I’m a big fan of the band. The music and the show all came together, and I loved every second of it. The band was on fire tonight! To walk away from this concert with a guitar pick of my hero Paul Stanley was just an added bonus!

The band played very tight. Gene sounded great and although Paul doesn’t always hit the notes like he used to and relies on a backing tape, he still shows why he is one of the greatest band leaders. Tommy and Eric are great within the band, vocally, and musically they fit in, and they give a good vibe to the music.

It’s the last show tour of KISS, but I hope to catch one last KISS in the future. If that is not the case, then I can look back on an amazing concert in the Ziggo Dome in Amsterdam. KISS keeps on proving why they are the hottest band in the world and a must-see! 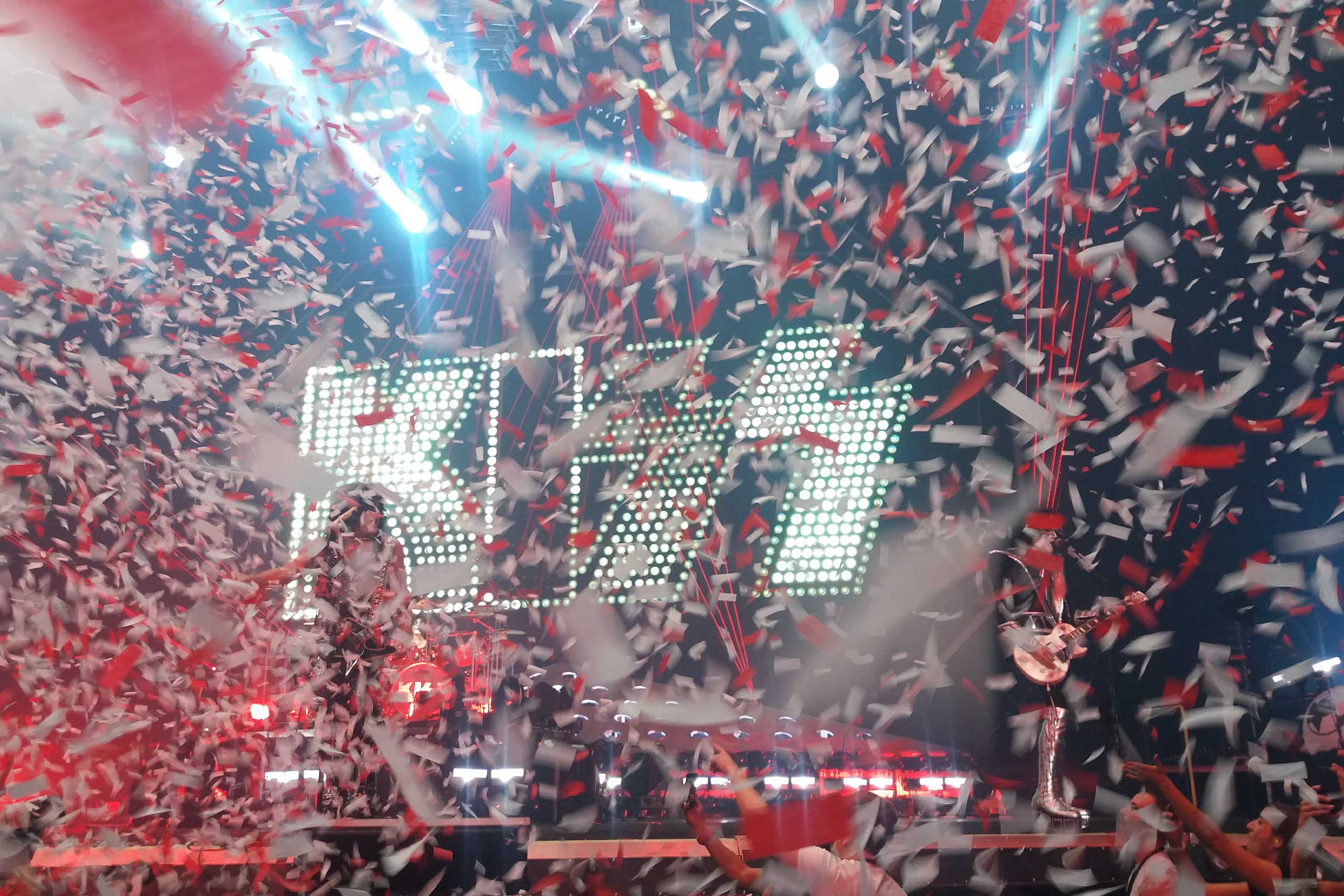 Ol’ Black Eyes Alice Cooper is back in Europe!