The time has come for rock legend Whitesnake to bring down the curtain on a lengthy and highly impressive career. The Farewell Tour sees the outfit of David Coverdale be joined by the iconic Foreigner and Europe. The OVO Hydro was ready for a night of the world’s biggest anthems in rock!

The time of saying farewell

Age stops for no one, not even the bands that wrote the soundtrack of many people’s lives. No matter if you were born in the 70s, 80s, 90s or even 00s, the songs hold memories and stories for all of us.

Farewell tours are a common affair for the bands that started back in the day and defined an era of music where rock dominated the charts. Now the musicians got older, voices began to struggle, and the years of touring and performing took their toll.

Whitesnake brought The Farewell Tour to Glasgow for a night of legendary rock at the OVO Hydro. The anticipation was high for this concert as it would be the last chance for the Scottish fans to see one of the greatest rock bands live. American band Foreigner and Swedish group Europe joined Whitesnake on their farewell tour. All in all, a great line up for a night out!

With three bands on the bill, you can expect an early start and at 18:45 Europe hit the stage. Whoever thought Europe would be all about the 80s Final Countdown sound was wrong, as the band has, since its reform in the early 2000s, a heavier sound.

Europe opted to mix their 80s hits with their latest albums, starting with Walk the Earth. As a special guest, you can imagine that they wouldn’t have the full light production and freedom on the stage. However, it felt a bit too dark with only one big light focusing on lead singer Joey Tempest, leaving the rest of the band in the dark. Combine that with microphone issues for the lead singer, and you can understand he had his work cut out to deliver a great show. 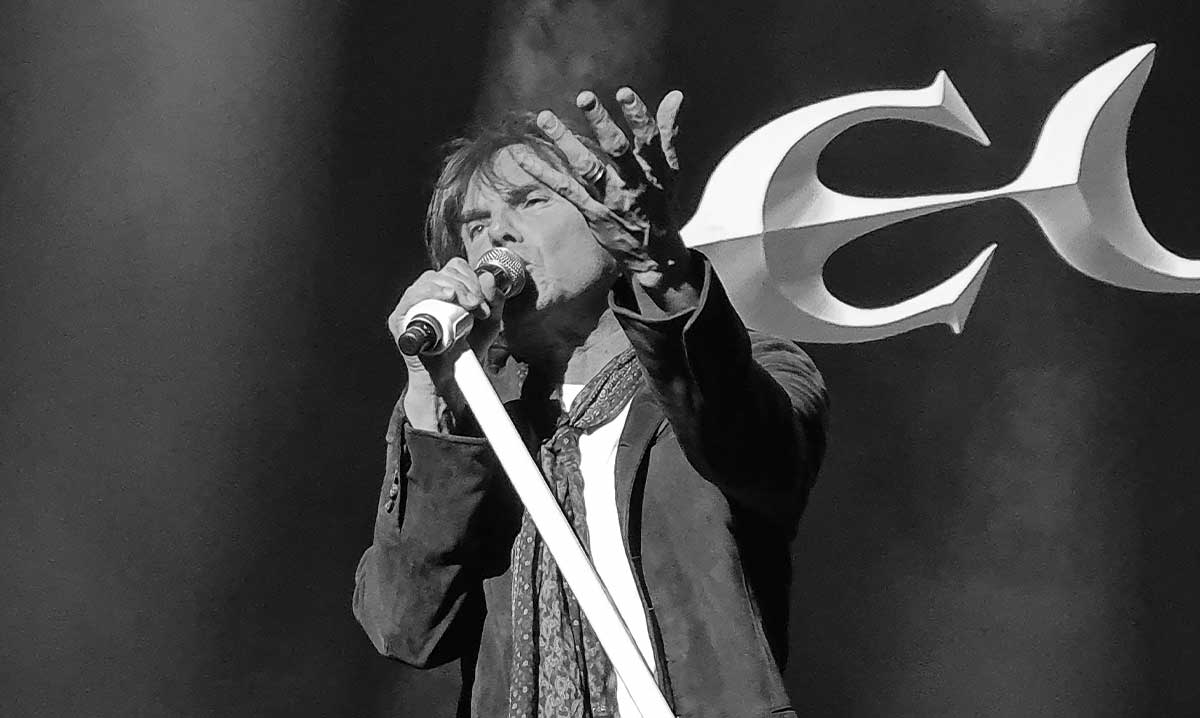 And they did. Europe made the best of the situation and with high crowd engagement of all the members and classic songs; they warmed up the crowd easily. Joey Tempest’s voice has aged like fine wine, hitting all the right notes, including the high notes in Carrie. John Norum on guitar might be one of the world’s most underrated guitar players and is always a pleasure to look at.

The short set list included hits like Rock the Night, Ready or Not, and newer material like War of Kings. Of course, The Final Countdown wasn’t forgotten, as it ended as the perfect concluder. Technical issues couldn’t stop Europe from delivering the perfect warm up that left fans wanting more. The band sounded great together, and I honestly have never seen a bad performance from the Swedish rock outfit. 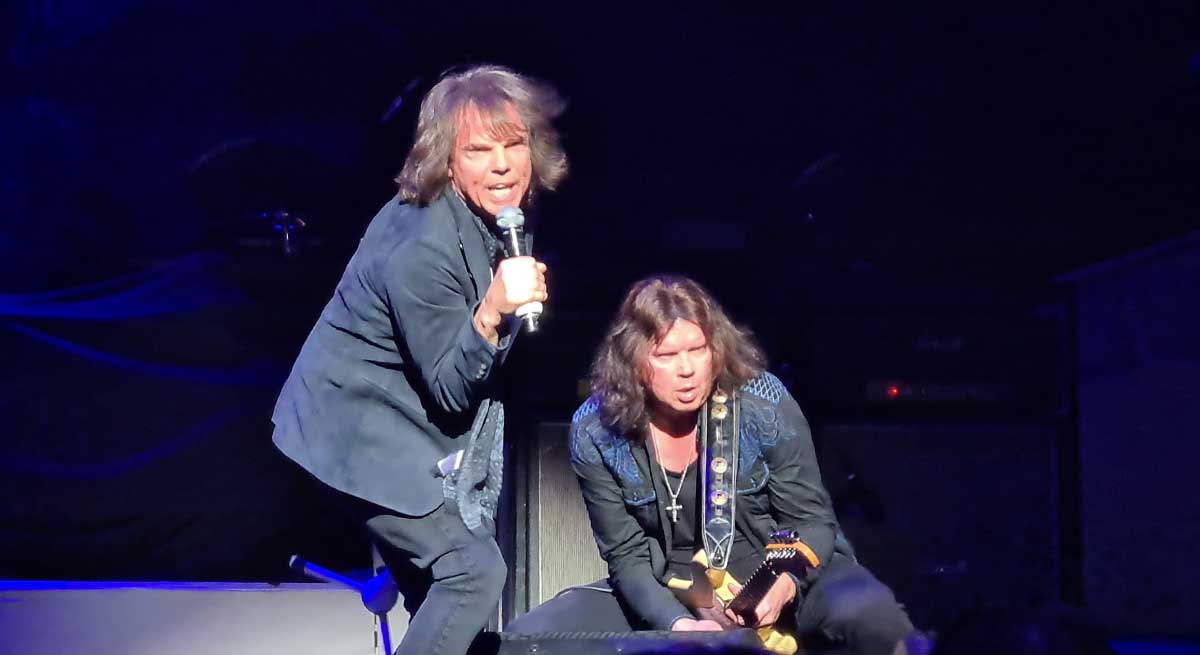 After a stage change over, it was time for Foreigner to bring their catalogue of hits to the Scottish audience. Perhaps there is no original member of Foreigner currently on stage; but the band brings an incredible ode to this iconic band. Lead singer Kelly Hansen, who joined the band in 2005, understands what Foreigner is all about. His vocals are energetic, powerful and hit every note.

Opening with Double Vision, the band had the crowd in the palm of their hand. The energetic performance from the band wore off to the crowd, who were singing and dancing along. Head Games followed before Hansen made his way into the crowd for Cold as Ice. 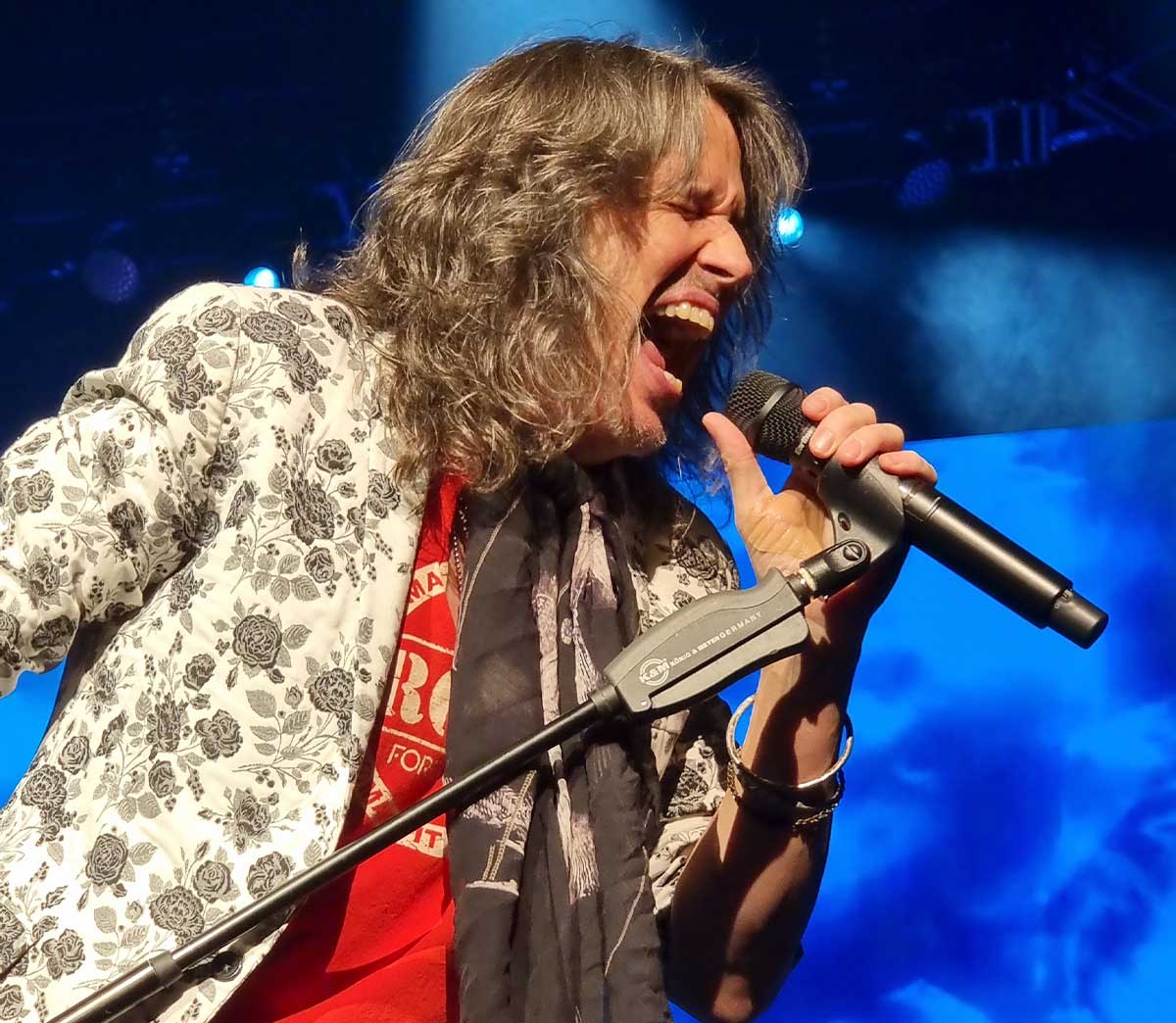 The band played not a beat or note wrong as they powered through their set. Guitar duo Bruce Watson and Luis Maldonado ran across the stage as they were playing the licks of Dirty White Boy. A true crowd pleaser of a song and perhaps my personal favourite of the night!

Feels Like The First Time was followed by Urgent and Juke Box Hero which closed the main set of the night. Urgent ended with a keyboard solo and the drum solo. Although I always enjoy seeing solos, I can’t help but think we could have another song instead. For example, Waiting for a Girl Like You, which was missing from the 1 hour and 20 minute set.

Original and founding member Mick Jones so far didn’t make his appearance on the stage. After being hospitalized 10 years ago, Jones decides on short notice whether he will join the band on stage or not. Tonight, Glasgow roared as the English musician made his way onto the stage.

With Jones joining on keyboard and guitar, Foreigner concluded their of 70s and 80s power hits. Long Long Way From Home was followed by I Wanna Know What Love Is. Lead singer Kelly Hansen took the time to bring his wife on stage, celebrating their 2-year anniversary. An amazing, powerful performance concluded with Hot Blooded as Foreigner knocked it out of the park.

Foreigner put down a performance that will last a lifetime and proves how music can be timeless. If you have the chance to see Foreigner, take that chance and go. You will be treated to a breathtaking show of incredible musicians that will give major bands a run for their money. 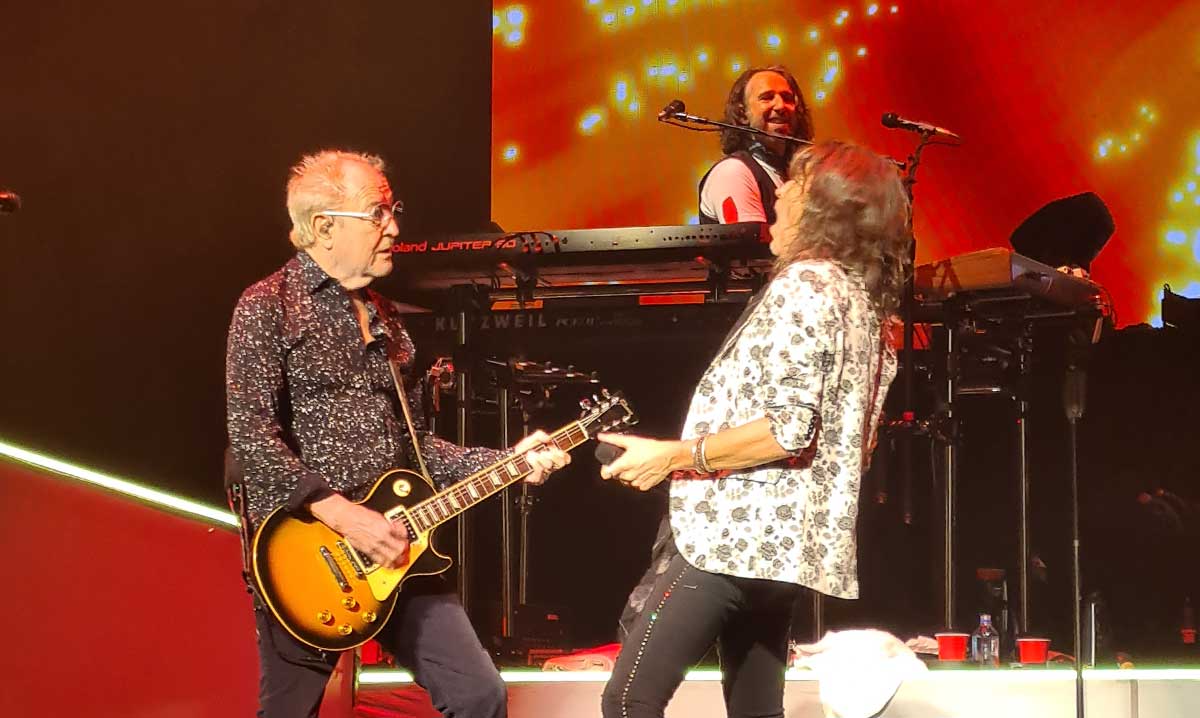 Two bands down, just one to go! The anticipation of the crowd was at a boiling point as the house lights went off. Welcomed by a huge roar, the band made their way to the stage as Whitesnake began with their classic 1987 song Bad Boys. For good measure, the band threw a snippet of Children of the Night into Bad Boys.

With DC strutting around the stage, the band didn’t hang about, kicking off straight with Slide It In and Love Ain’t No Stranger. The energy of the whole band didn’t make you feel like you were watching a farewell tour. 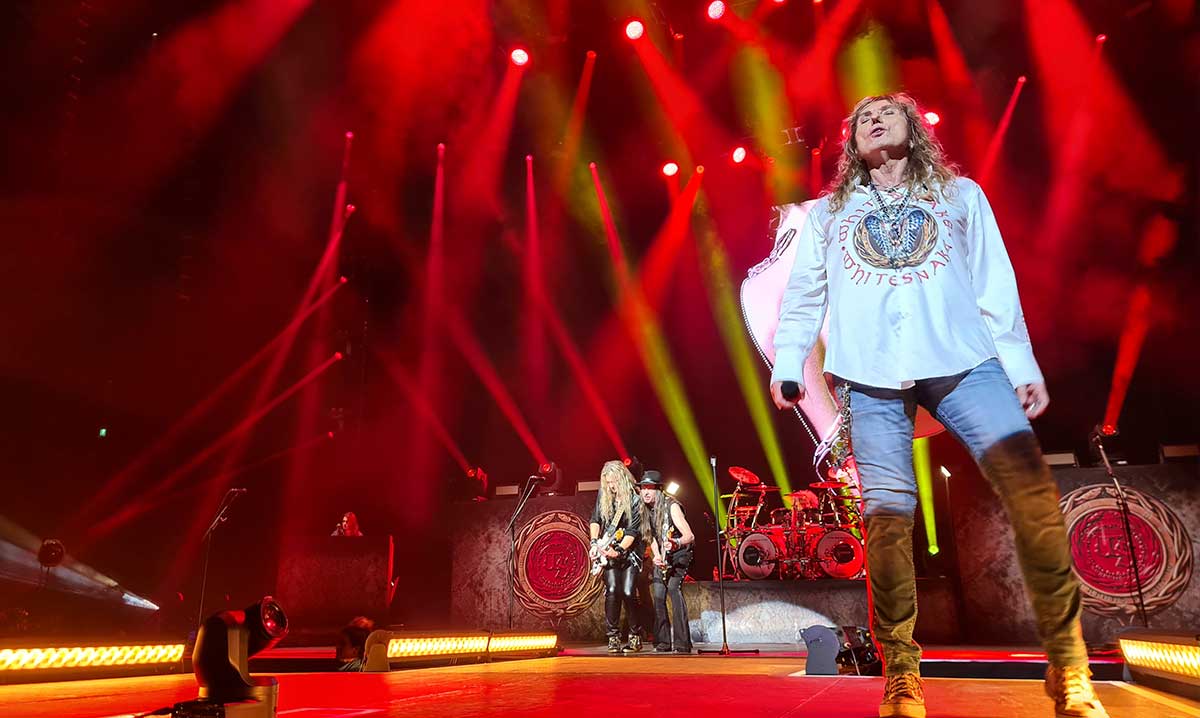 A celebration of 45+ years of Whitesnake

The set list included a great variety of 45 years of Whitesnake. Combining new material from the 2019 album Flesh & Blood as well as the first Snakebite EP (1978). Throughout the 45+ years, Whitesnake has seen members come and go. However, DC has been at the helm of the band all along. Tonight’s members include Tommy Aldridge, Joel Hoekstra, Reb Beach and Michele Luppi. New in the band are Dino Jelusick and the first female Whitesnake member, Tanya O’Callaghan.

The band sounded stellar. The class act musicians were on fire and truly delivered a great show, showcasing their talent. To highlight this even more, all the members had their solos. Aldrige on the drums delivered his iconic solo that includes him drumming with his bare hands. Beach, Hoekstra and Jelusick joined forces in their solos of guitar and keytar. 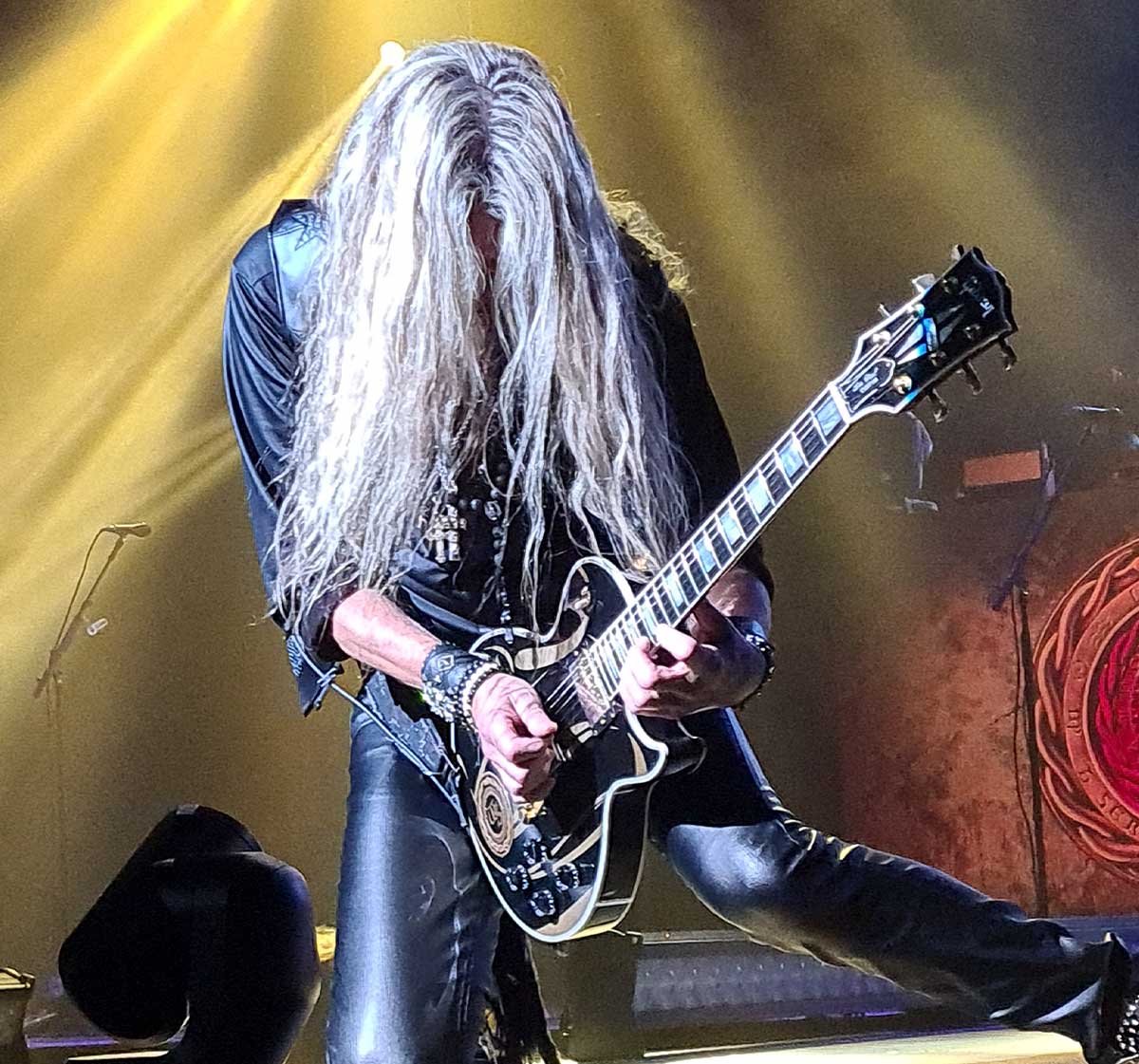 Ere’s a song for ya

The set contained all the hits: Fool For Your Loving, Here I Go Again and Is This Love. As my partner and I held hands throughout Is This Love, DC noticed this and gave us a well approving signal. Such an amazing gesture to make you feel special.

The show finished with a Deep Purple classic: Burn. It brings my Whitesnake history to a perfect ending, as the first time I saw them was during the Purple Years Tour. The first song on that set was Burn, so to have it all come full circle was an emotional moment.

We do need to address the fact of the voice. Vocal wise, you can hear Coverdale has been performing for the last 50 years. Sounding a bit rough around the edges and having an amazing backing band to fill in the gaps. It is the farewell tour, celebrating an amazing era of music. It won’t sound like the 80s. That said, the crowd loved every second of Coverdale pondering around the stage and pulling off some classic rock moves.

DC laid down a professional and emotional performance that will be remembered for all the right reasons. As We Wish You Well plays over the speakers and the band takes their final bow, it concludes the final show in Scotland. A true end of an era. Thank you, David Coverdale and Whitesnake for an outstanding show and legacy. 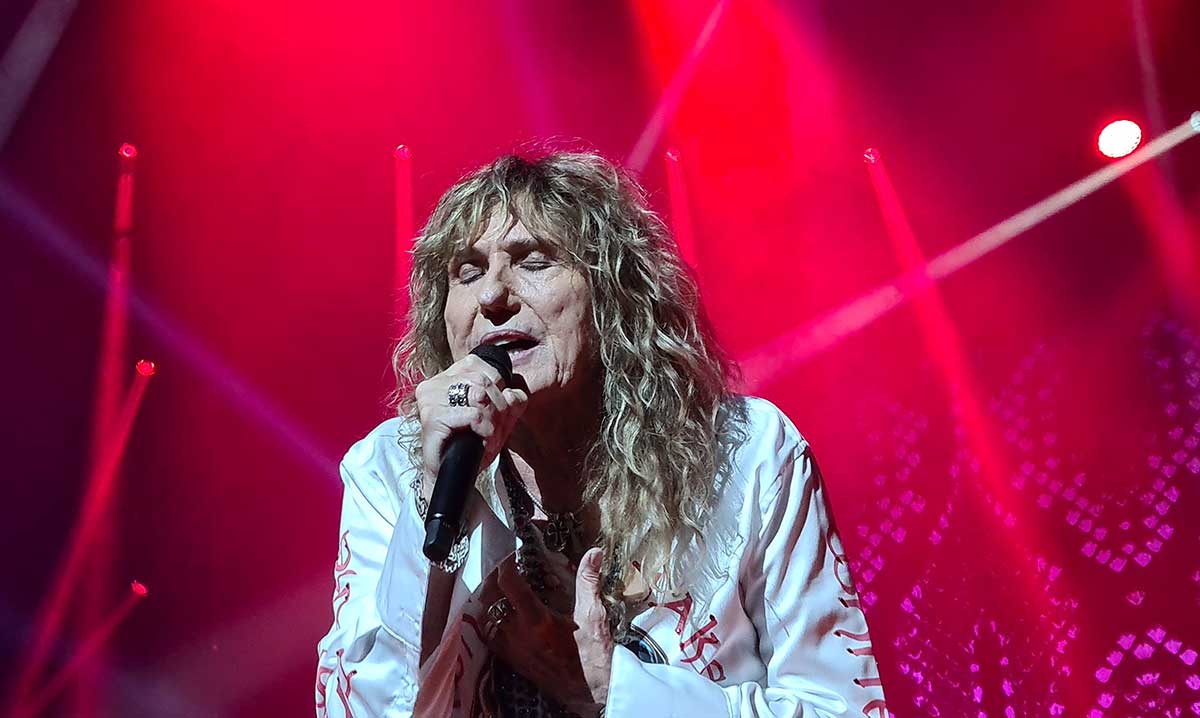