What is a better way than to kick off the New Year with a rock concert? I could not think of any and neither could German vocalist Till Lindemann who decided to kick the year off with a show in Israel.

Till Lindeman is a German singer who is known for being the vocalist of metal giant Rammstein. Nevertheless, Lindemann is more than that; he is a vocalist, songwriter and poet who is famous for his outrageous performances.

With the band Lindemann, the singer teamed up with Swedish multi-instrumentalist Peter Tägtgren. Over the last few years, they released two studio albums called Skills in Pills (2015), F & M (2019). In 2020 Tägtgren left the band and Till Lindemann decided to keep going with the project. Under the name, Till Lindemann, the German singer is embarking on the Ich Hasse Kinder Tour 2022.

The show in Israel was going to be the first show of Till Lindemann since March 17, 2020 in Russia. A show that took place in a time when corona was starting to have the world in a lockdown. Shortly after the singer was taken to hospital where he spent the night in the intensive care. Although he tested negative it would mean, together with the pandemic, that concerts came to a stand hill.

Till Lindemann got a new band around him for the latest tour. We see Emily Ruvidich and Jes Paige on guitar. These female guitar players are highly talented and they absolutely rocked during the show. Acey Slade is on bass with Sandy Beaches on the drums. Unfortunately, Sandy wasn’t able to perform during tonight’s show, but she was replaced by Shaked Furman, who absolutely killed it.

After an introduction video, which saw Till Lindemann walk around in a diaper around Berlin, the lights went out and the arena went crazy.

Around 5000 people put their hands in the air and started screaming as the band made their way on to the stage to kick off with Skill in Pills. The band was all dressed in red, with Till Lindemann wearing a red cap, red jacket with big fury sleeves and red leather pants.

During the last tour cycle, the band was dressed up in all white with white make up and this time around, the makeup was the same white, but with vibrant red around the eyes.

The first show of the year (and the first show since corona started) sounded super tight from the start. The band was amazing to listen to as they went into Lady Boy. Till Lindemann is known not to speak during the show, however he did shout “Israel” after the second song. As you can imagine this made the crowd roar of excitement. Fat gave the audience not only something to see on stage but also at the big screen with a video of two women being passionate. Frau und Mann and Ich Weiss es Nicht followed in this fast paced show.

Throughout the show the big video screen was used for videos of golden showers, feeders, spanking and much more.

Visuals were also used for Allesfresser, in which we saw Till Lindemann eat a lot of food while dressed as a schoolgirl. As tradition for this song, the middle section sees Lindemann use a flashlight to shine on certain sections of the audience. Those lucky chosen ones would then be hit by cake throwing band members. The crowd absolutely loved it and the roars that came from the crowd were insane.

With Knebel the pace of the show was temporarily slowed down, before we hit the hard rock part in the middle of the song. In the acoustic part of the song, Jes Paige used a stage tech as a guitar stand. The acoustic guitar once again ended up being thrown off the stage during the hard rocking section. Till Lindemann’s voice was absolutely on point and sounded great throughout the show.

Most of the Lindemann songs are in the German language, but English songs Home Sweet Home, Cowboy and Golden Shower were performed as well.

The German roots came back with Blut and Platz Eins. In the latter, we saw Till Lindemann walk through the crowd surrounded by LED sticks and security. While singing, giving hugs and posing for videos and selfies, Lindemann seems to really enjoy the interactions with the crowd. The band kept on jamming on the stage while Lindemann made his round.

Freedom to speak, or sing, was thrown together with the song Praise Abort. Speaking of throwing, with Fish On, the crowd was treated to real (though not live) fish being thrown at them. Several of them made it back to the stage to be chucked back at the crowd. I never saw a fish bits fly across an excited audience ever before, so it was definitely a first. Ach so Gern and Gummi were the songs that followed for the hard rocking crowd. 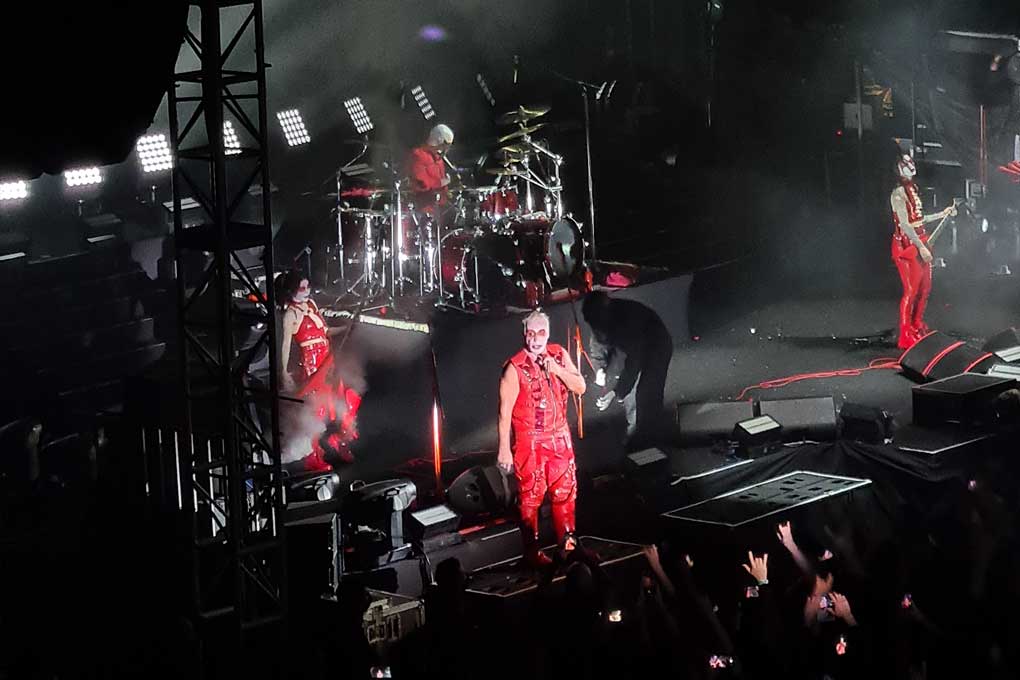 People that know Till Lindemann, or have been to one of his shows will know he doesn’t seem to like microphones. After several songs he threw or dropped his microphone on the stage floor. Every time without a fail it was picked up by the stage tech who placed the mic on his helmet to be collected by Till again.

Mic stands of his fellow bandmates were not safe either as they were being thrown or kicked off the stage by Lindemann. The show ended with arguably the biggest song, Steh Auf, before ending it with a live debut of Ich Hasse Kinder.

Till Lindemann in Holon absolutely knocked it out of the park. It was amazing and I couldn’t be happier to attend this show. The band as a whole were a well-oiled machine that didn’t miss a beat. Both guitarists really had this chemistry together in playing style and it really enhanced the show and performance. Acey Slade nailed the bass line and replacement drummer Shaked Furman seemed to be a perfect fit for the band.

Lindmann’s vocals are one of a kind and to hear them live for the first time was amazing. Combine that with the whole show we saw and I can’t deny it was an incredible spectacle. This show is one to be beaten and it’s only the start of the year! Catch Till Lindemann on tour whenever they come near you.

Till Lindeman brought a show that is a once in a lifetime experience that will leave you covered in cake and fish. The music alone is already amazing, but combine that with the big show he brings and you got a night you won’t forget anytime soon!