Whitesnake is back! Recently they released new material with the Flesh & Blood album, and now they are back on tour! I saw the English hard rock band on the first date of the European tour, and it was a night to remember.

Support band of the night is The Dirty Denims. This Dutch hard rock formation has some influences of AC/DC with some Joan Jett and KISS pushing through. The music sounds nice, although a bit cliché. Titles and lyrics from songs like Make Us Look Good and Famous are kinda catchy but also very cliché.

The band seemed to know how to entertain a crowd and won the Whitesnake crowd over pretty quickly. The band is fronted by a woman, and she doesn’t only provide the vocals, but also picks up the guitar on regular base. Their set ended with little pyro sparkles on their guitars, as the crowd was now fully warmed up for Whitesnake.

The Dirty Denims are an enjoyable support that really know how to play music and entertain a crowd. However, for me personally, the titles and lyrics are just too cliché to listen to more material of this band.

As My Generation by The Who is playing, the crowd in 013 Tilburg is getting more excited by the minute. Every Whitesnake fan knows that after My Generation, the band will enter the stage and start playing.

And so the show began. After the last notes of The Who, the stage turned dark, and the band members joined the stage. With the band members on stage, it wouldn’t take long before David Coverdale, the legend himself, would enter the stage. Applauding the crowd and doing his iconic screams and microphone stand moves, the band entered straight into their smash hit Bad Boys.

Released on the eight times platinum album 1987 Bad Boys, the song seems to be timeless. Whitesnake performed on their first show on European soil in 2019 with a lot of energy and great musician ship. 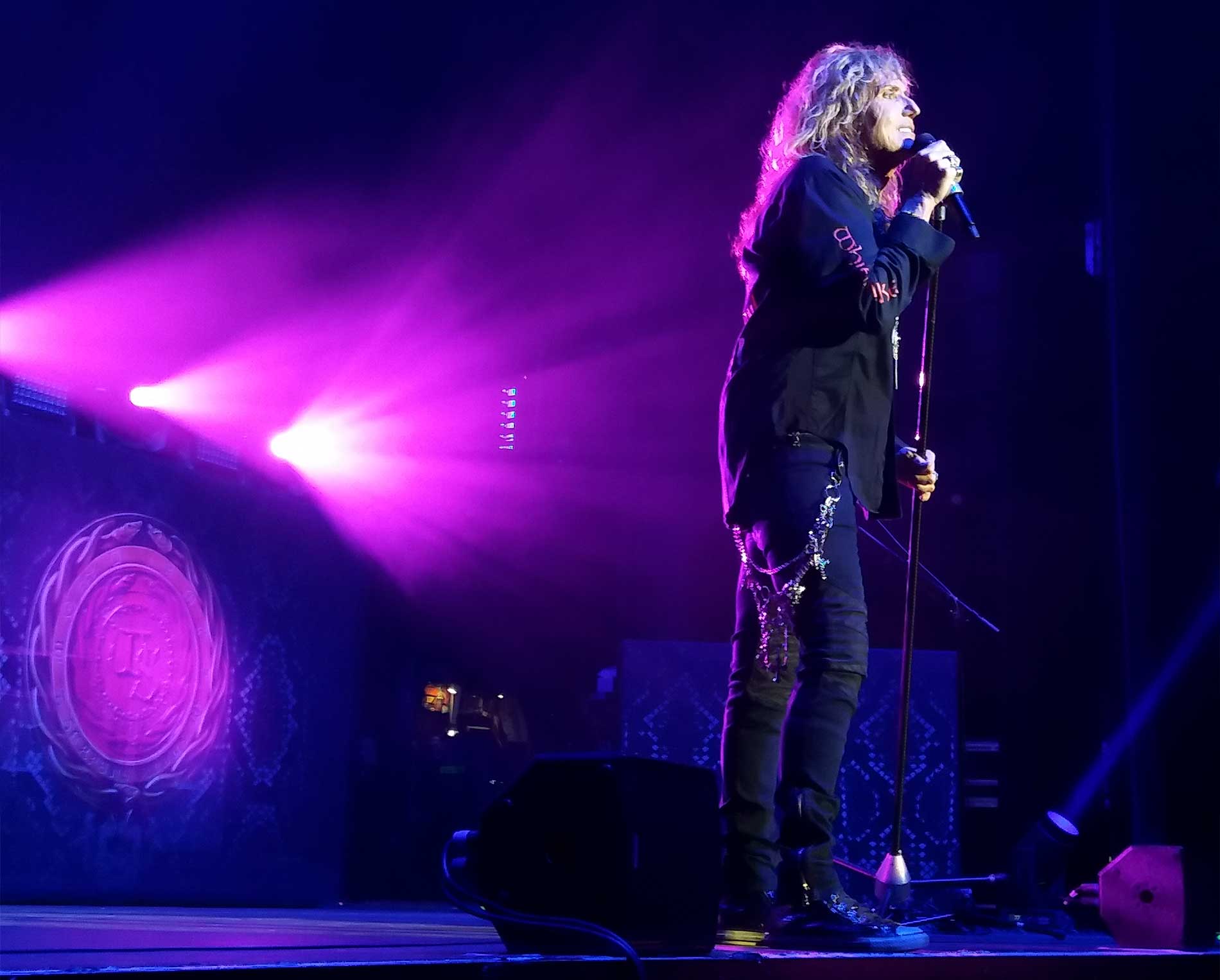 As it is the 35th anniversary of the Slide It In album, we saw a few songs of this album making the set list as well. The first one being Slide It In. The crowd loved it and from the second both guitarists started the riff of the song.

Gonna Be Alright was the first song of the latest Flesh & Blood album. As you can hear on the album, the vocals of David Coverdale have aged since the 70s and 80s. This isn’t really a surprise after such a long career, and tonight he showed he still has it. Although some songs sound better than others, the band offers the English man some help on the vocals.

With a discography that spans over 40 years, you bet that David Coverdale has some hits under his belt. Although some personal favourites are missing from the set (Fool For Your Loving and Judgement Day) there is enough room for some crowd pleasers.

The first being Love Ain’t No Stranger. This power ballad got the crowd singing along with every line before the band kicked off a song of the latest record, Hey You (You Make Me Rock). The song is just made for live performances, with a great chorus. Coverdale’s vocals fit the song nicely and the band really plays tight (all night).

Slow An’ Easy and Trouble Is Your Middle Name keep the train of songs going. The sound within the venue is great, and the stage really seems to fit the band. I’ve seen Whitesnake and other bands here in the past, and it just always works. The show itself isn’t filled with pyro or fancy visuals. It is the band and their music and that is all you need! 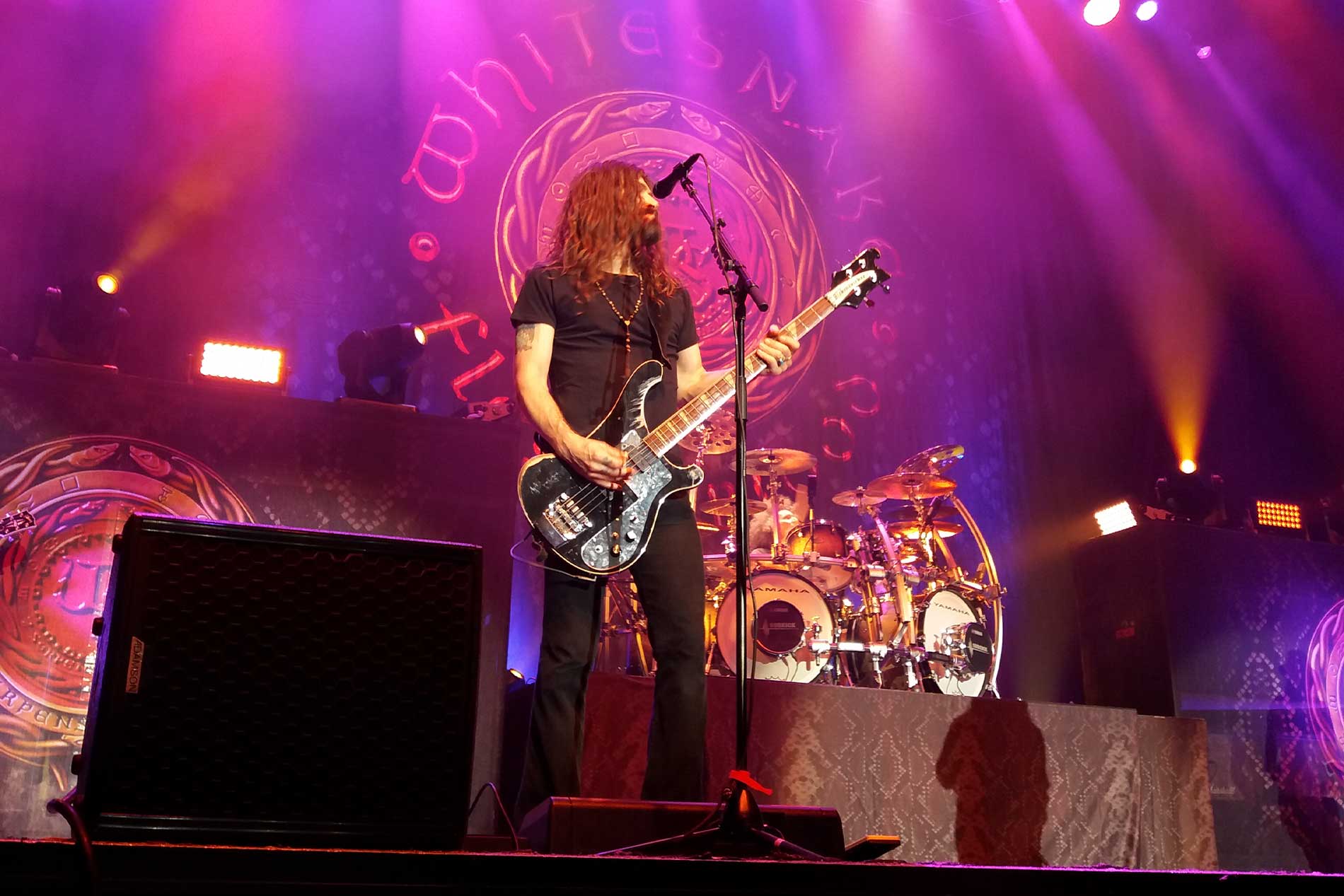 Michael Devin on bass with Tommy Aldridge in the background. Photo shot by Emiel Aarten.

Behind frontman David Coverdale stands a very powerful band. Joel Hoekstra is together with Michele Luppi, the latest additions to the band. Michele Luppi on keyboard and backing vocals keeps the pace going and really seems to enjoy himself.

Joel Hoekstra on guitar is providing a show on his own by interacting with the crowd and striking poses. His playing is amazing and fits the band so well. Reb Beach is the lead guitarist and has been with the band for over 15 years. In an incredible guitar duelling solo, both guitarists showed their skills in front of the crowd. The different styles of playing and the combination of the 2 made it sound so good! The clear winner was the crowd for seeing 2 great guitarists play their heart out.

Shut Up & Kiss Me is a nice tongue & cheek song that continued the set list. Get Up followed and included an unbelievable drum solo by Tommy Aldridge. The crowd was amazed by the sheer talent of the drummer with the big hair. Halfway during the solo, he ditched the sticks into the crowd and continued playing with his bare hands. Tonight, you really are in the hands of rock royalty. 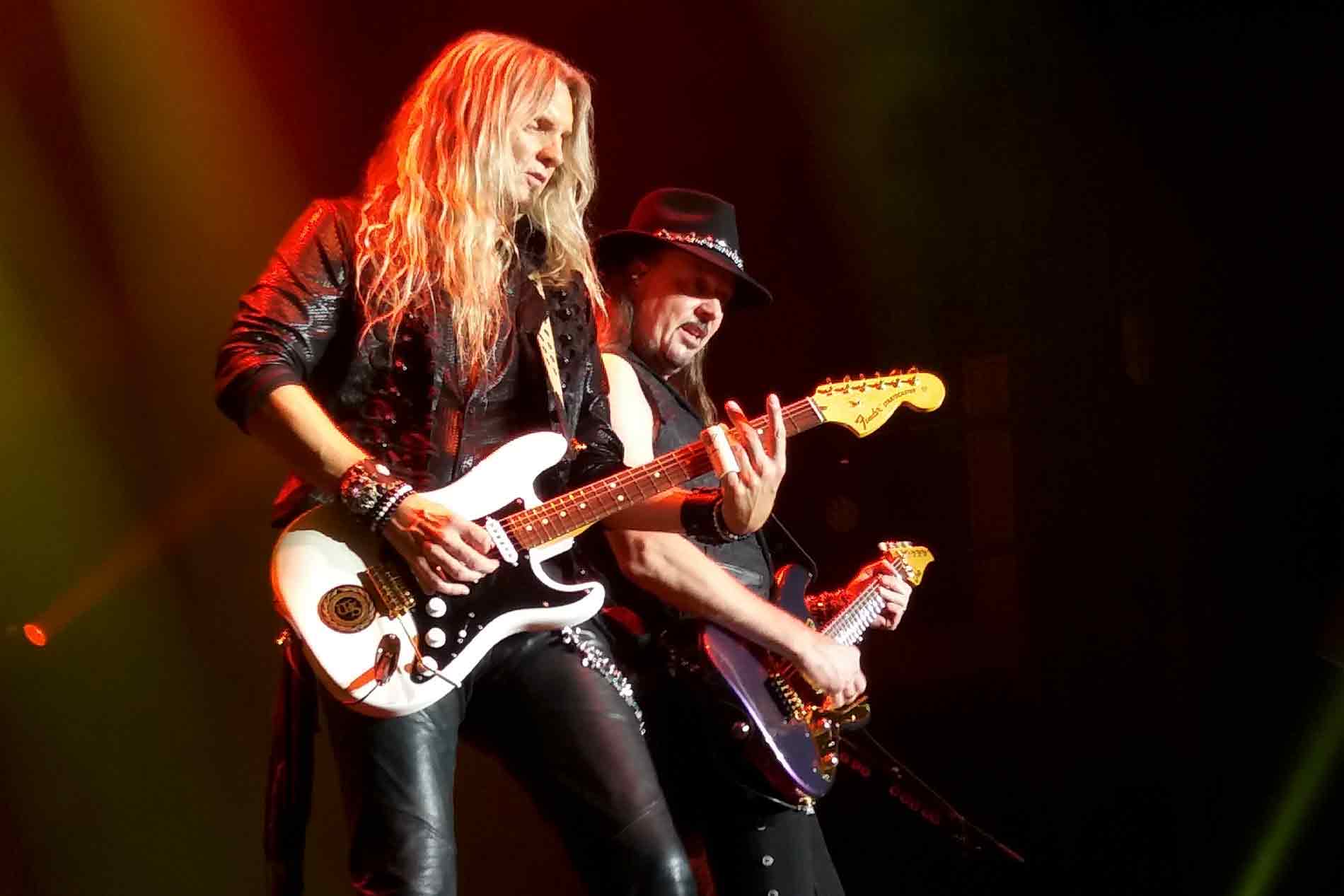 Joel Hoekstra duelling it away with Reb Beach in Tilburg 2019. Photo by Emiel Aarten

Going out with the hits

After Coverdale introduced the band to the audience, it was time for arguably the biggest hits of the band. Starting with Is This Love! The power ballad gets everyone singing along. Give Me All Your Love and Here I Go Again, finished the main set. Michael Devin on bass had an impressive little grove going on at the end of Here I Go Again. The American bass player really plays a vital role in the band with backing up David on vocals throughout the show.

We didn’t have to wait long before the band came back on stage to play the last song of the night: Still Of The Night. This classic rock anthem ended the night on a high. Whitesnake rocks!

Coverdale doing what he does best, being a great frontman! Photo shot by Emiel Aarten.

What can I say? Whitesnake pulled it off again. As most of the audience left the venue with sore throats of singing along with every song (I sure did) I can only look back at it with a massive smile on my face. I loved how many of the new songs featured on the set list. Combine it with some stuff from Slide It In and of course the 1987 album, and you got a killer set. I wished it would have been longer, but I’m not complaining. It really was a great show, and I’m glad I saw them.

Recently I had the honour of interviewing Joel Hoekstra! Follow the link down below to read the full interview.

Shining a light at Bryan Adams during his latest tour!