Let’s go back in time to the 10th of November 1978. Because on this day, Queen released their seventh studio album called Jazz. It featured so many top singles and shows a band that knew how to get the attention of their audience. But even though the title suggests otherwise, it doesn’t contain any jazz. What it does feature is an amazing collection of musical styles.

After News Of The World

After the enormous success of the News Of The World album, Queen went back to the studio in July 1978. Due to tax purposes, the band decided to record their new album outside the UK. With Jazz, Queen managed to score several hit singles and were topping the charts around the world. The sound of this album might be one of the most distinct records by the band in the 70s.

It’s the summer of 1978. Just a few months ago, Queen finished the very successful News Of The World Tour. The band came together in Nice, France to start working on the new album. After a few weeks of writing, Queen was heading to the studio in Montreux, Switzerland to start the recordings. For the first time, Queen decided not to record their album in the United Kingdom.

Roy Thomas Baker returned as the producer of the album. Baker had worked on all previous Queen albums, apart from A Day At The Races and News Of The World. It would also be the last Queen album Baker would record. With 13 songs and a length of 44:44 it was the longest Queen album at that point. So let’s dive into these songs.

Freddie Mercury got the credits for writing the opening song for Jazz. This mystical song consists of English, Arabic and Persian and has an up-tempo melody to it. Mustapha captures an Arabian bazaar vibe that you wouldn’t expect from a band like Queen. Maybe that is exactly the reason why it is on the album and why it does feel like a true Queen song.

Often Mustapha would be played as part of the introduction to Bohemian Rhapsody. However, the song can also be found on various set lists where they played almost the entire track with only dropping the second verse.

With Brian May’s Fat Bottomed Girls, the album takes a complete U-turn from the opening track. A hard bluesy rock song that has a clear topic: fat bottomed girls! It was the first single released together with Bicycle Race. It turned out to be a true chart topper. Although not all women groups were happy with the song. It didn’t stop the band. With Bicycle Race, Queen has a live song in the pocket that is loved around the world.

In March 2018 the RIAA certified Fat Bottomed Girls as double Platinum in the US with over two million digital downloads.

In contrast to Fat Bottomed Girls, Jealousy is a much darker song with some very powerful and personal lyrics written by Mercury. Bryan May plays the acoustic guitar, which had been modified to give the guitar a sitar effect. This effect had been used in the past on White Queen (As It Began) from the Queen II album.

Bicycle Race was written by Freddie Mercury after seeing a stage of the famous Tour de France. The song is complex and features a section in the middle in which all four members are playing with old-school bicycle bells. The crowd really loved it. So during the concerts, people would be ringing their own bells during that section.

Although May has stated that the song was not an autobiographical song of Mercury, it might give us a bit of an insight in the mind of the singer. Lyrics like “You say coke I say caine” and “Income tax I say Jesus” are references that seem to have some truth in it. Although Mercury didn’t really enjoy riding a bike and despite what the lyrics say he was a Star Wars fan. The song also references Fat Bottomed Girls with the lyric “fat bottomed girls, they’ll be riding today”. A similar reference can be found in Fat Bottomed Girls hinting at Bicycle Race with the following lyric: “Get on your bikes and ride!”

If You Can’t Beat Them contains one of the longest guitar solos in a Queen song and was written by bassist John Deacon. You will find this song on most set list of the time, and it will tell you the story of the entertainment industry.

With Let Me Entertain You, Mercury wrote a song direct to the audience. It is a self-aware song about the music business and contains references to their tour manager and their record labels at the time.

Side two of the album starts strong with fast and aggressive guitar work from the songwriter Brian May. Dead On Time resembles Keep Yourself Alive from Queen’s debut album, and the words keep yourself alive are found in the last chorus of the song. The song would have been perfect to perform live, but for some reason it never happened. Nevertheless, May used small snippets from the song in his guitar solos during the Jazz tour. In the credits of the song can be seen that all the credits for the thunderbolt at the end of the song go to God.

With In Only Seven Days, Deacon shows his songwriting craftsmanship romantically. The song features the bassist playing acoustic guitar as well as the electric guitar. Vocal duty went of course to Mercury, as John Deacon never sang on an album.

With Dreamers Ball, Brian May pays tribute to Elvis Presley, who passed away a year before. It has a Southern vibe to it, but when you look at the lyrics, you see a story about loss. Dreamers Ball had been featured in the set list back in the 70s.

The late 70s were a changing time in music and disco was growing in popularity. With Roger Taylor’s song Fun It, the band knew how to bring different musical styles to the wider audience. This great song features the drummer sharing vocals with Mercury. Next to singing, Taylor also played most instruments on Fun It. It’s easy to realize what the message behind the song was: have fun and enjoy life!

With Leaving Home Ain’t Easy, Brian May wrote a reminder of what the life of a rock star was about. The ups and downs of this lifestyle come forward in this ballad. May sang all the vocals for this song including the harmony in the chorus.

The following song on the record is quite a contrast to the ballad written by May. Mercury wrote another top 10 hit single with Don’t Stop Me Now. It is one of the most famous songs from the band and always gets the crowd excited. The song starts with Mercury singing on a piano, shortly followed by a fast pace bass line and drum beat provided by Deacon and Taylor.

The song features very little guitar apart from the solo. During live performances, May would play rhythm guitar during the rest of the song and add some extra rock feeling to it.

The album finishes with the second song written by Taylor, called More Of That Jazz. Once again, Taylor plays most of the instruments and sings all the vocals. Taylor gave it all on the vocals, with hitting some extraordinary high notes, peaking on an E5. The outro of the songs contains short snippets from other songs on the Jazz album including Dead on Time, Bicycle Race, Mustapha, If You Can’t Beat Them, Fun It, and Fat Bottomed Girls.

Why Jazz with no jazz?

Why would anyone name a record after a music style that you can’t find on the record? Well let’s be honest, it is Queen! With the popularity they had at the time, they could have called the album anything. There are stories however that Freddie Mercury enjoyed the local jazz festival in Switzerland. But it’s unknown if there is any truth to that story.

Roger Taylor suggested the artwork. He was once in Berlin and noticed a similar design that inspired him to use it for the new album. 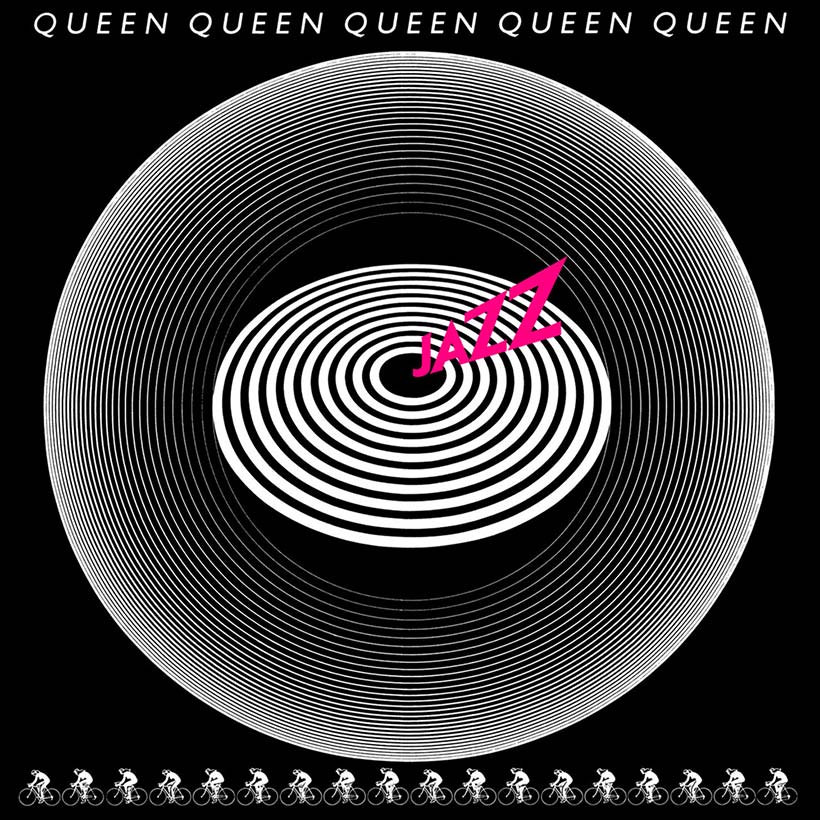 As a celebration of the (almost) completion of the album, Queen threw together with Elektra and EMI one of the most lavish parties ever held. For a lavish party you need a lavish location and so the band went to New Orleans, America.

For Queen, it wasn’t enough! They went on to organize a bicycle race. The race was held in Wembley Stadium with nude women to promote the album and the Fat Bottomed Girls and Bicycle Race single. Footage of this race would later be used in the Bicycle Race video clip, and a photo of the race was used for a poster that came with the album. After the video was recorded, the bicycles were given back to the supplier Halfords, but they refused to take the saddles back and insisted that Queen were going to pay for replacements.

Freddie Mercury recorded the last vocals for the album just before they went out on a massive tour which started in America. Unfortunately, Mercury’s voice was still worn out after the last recording sessions, and so his vocal performance wasn’t always on the same level compared to previous tours.

The band played 36 shows in America before starting their second leg of the tour in Europe. Part of the European tour would be recorded for Queen’s first live album called Live Killers. It would also be the only tour that the band didn’t perform in their home country. By the time the 3rd and last leg of the tour was finished in Asia, Queen played 80 concerts in 3 continents in front of thousands of people each night.

There wasn’t much rest after the Jazz tour, as the recordings of the new album The Game started shortly afterwards. The Jazz album once again would prove the musical talent of the four members of Queen.

The Dead Daisies, the story so far